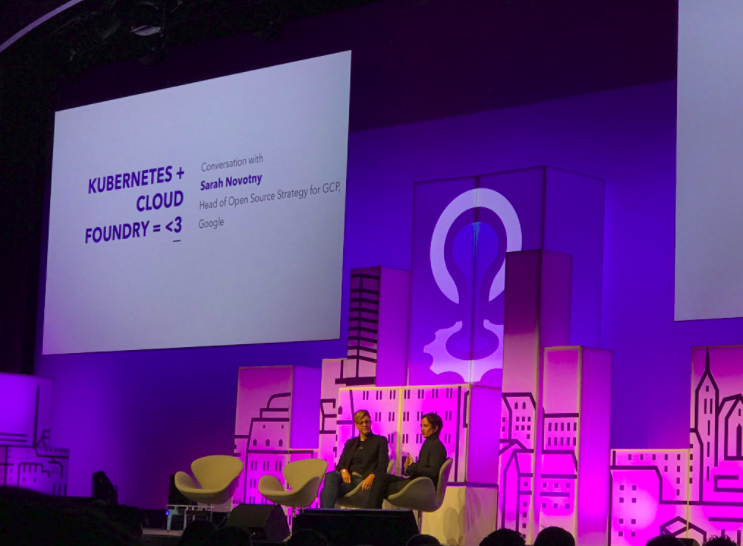 Yesterday I wrote that I would be at the Cloud Foundry Summit Europe in 2017 in Basel. All was well when I set out this morning, but when I got to Gatwick airport it turned out my flight had been cancelled. So I didn’t make it to Basel, but I did get a chance to look at some of the news from the event, which is definitely worth recounting.

One data point, which is frankly staggering is that enterprises now account for more than 40% of Cloud Foundry’s membership. The Home Depot joined today as a Foundation Gold member, with two seats on the board. Unless you’re familiar with open source foundations and how they work, the 40% might not surprise you. For someone like me, that’s spent at least 15 years living this stuff, it’s mind-blowing. There are quite literally no other foundations that enjoy anything like that kind of support and engagement from enterprises. The bets are unambiguous. At least 50% of the Fortune 100 are using Cloud Foundry, within the methodological limits of this study by my colleague Fintan.

[bonus update! So what can an enterprise commitment to Cloud Foundry open source look like in practice, outside of paying for membership to the Foundation. Check out Orange, the French telecoms company, open sourcing it’s Terraform provider for managing Cloud Foundry instances. Orange has a GitHub page dedicated to Cloud Foundry, and has 196 repos projects, including six pinned repos.]

Kubernetes too is seeing plenty of tyre kicking, but nowhere near the level of enterprise commitment at this point. Which brings us to some news: Kubernetes is now a first class citizen in Cloud Foundry land, which shouldn’t surprise us, but today formalised the news. Google and Pivotal have handed over their Kubo project (Kubernetes running on Bosh) to the Cloud Foundry Foundation to manage. In the process, the “dialtone” story is being fleshed out at the foundation as it has at Pivotal. My colleague Stephen wrote an excellent in-depth analysis of the balancing act between Cloud Foundry and Kubernetes here.

Kubernetes is, by design and definition, container-centric in its approach. It is described by one of its founders as “fundamentally a tool box.” Cloud Foundry, by contrast, container abilities like Diego notwithstanding, is application-centric. It is more production line than toolbox, in a sense. These approaches are neither mutually exclusive or inclusive, and indeed can and often are leveraged by different business units within the same organization depending on need.

The problem with the Cloud Foundry and Kubernetes conversation, then, isn’t the question of how the projects compare to one another. It’s the common and reductive assumption that there can be only one. The implicit assertion that Cloud Foundry and Kubernetes are the only two variables in a zero sum equation ignores both the differences between the two projects and the wider market context. Even if we assumed, counter-factually at present, that one of the two approaches could satisfy both projects’ audiences, there remains a large and growing number of other options which are neither app nor container-centric, with the function-centric serverless being perhaps the most obvious.

As of today there can definitely be two. Kubo will henceforth be known on “Container Runtime” for deploying Kubernetes apps, while Diego now called “Application Runtime” takes a more opinionated function centric, PaaS-like view.  Both runtimes actually run on containers, but they bring different perspectives to bear. Sarah Novotny, Head of Open Source Strategy for Google Cloud Platform (GCP) joined the event to explain the news from Google’s perspective.

Another really interesting data point was presented in the context of Cloud Foundry being used as the basis for enterprise multi-cloud. While it’s not at all surprising that 54% of Cloud Foundry users target Amazon Web Services as a platform, that 40% target VMware vSphere certainly is. You begin to understand why Michael Dell is so fired up about Pivotal as the spear for transformation licensing agreements across his portfolio. Consider that Pivotal won partner of the year at both Microsoft Azure and GCP, and yet more Cloud Foundry workloads are apparently being deployed on vSphere. Like I said yesterday, hybrid and or multi-cloud is very much a thing.

I wrote that Cloud Foundry wasn’t created with traditional (stateful) enterprise apps in mind. But traditional enterprise apps, in the immortal words of Willie Horton, are where the money is. Migration, mitigation and elimination of technical debt remains an opportunity worth tens of billions of dollars a year.

The CF Foundation also today announced The Foundry, a neat little portal (is that even a thing any more?) to help enterprises navigate over 600 suppliers and providers of Cloud Foundry services and products. It will be interesting to see which of the companies there with uncertified distros take the blue pill and join the Foundation. With all those enterprises engaged, it’s kind of surprising they aren’t already there. So Kubernetes goes from strength to strength, covering the industry in a thick eiderdown of vendor adoption, but Cloud Foundry is still very much in the game.

Before signing off, can I just say how much I am here for the photo above. Two smart, powerful women – Abby Kearns, executive director of the Foundation and Sarah Novotny, on stage, talking about tech, business, and ecosystems, rather than diversity and inclusion. More please everyone!

disclosure: CF Foundation, GCP, Pivotal are all clients. Opinions in this analysis though, are RedMonk’s.