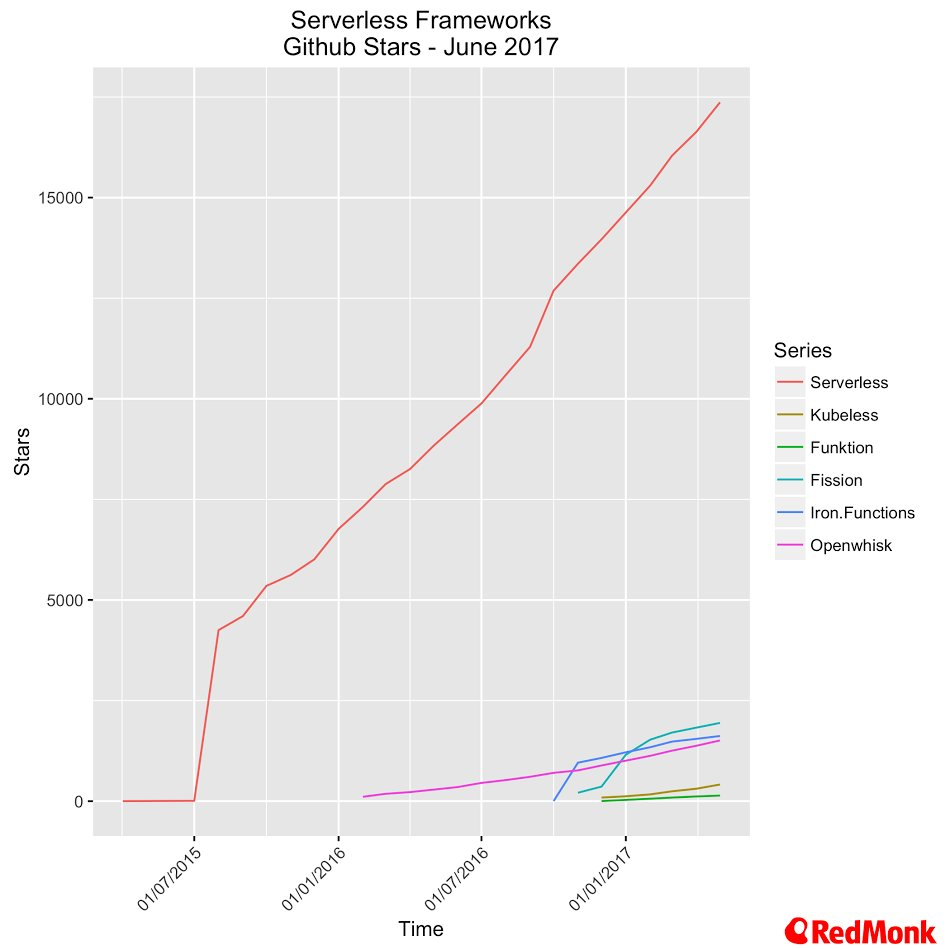 Serverless apps are auto-scaling, pay-per-execution, and event-driven. I wrote a post recently looking at the the growth of interest in serverless frameworks, with a specific question in mind about OpenWhisk. But as the chart above (which was actually at the bottom of that post) shows, interest in the Serverless framework, as least as far as GitHub stars is concerned, is skyrocketing.

Serverless was founded by Austen Collins. He’s friendly, tending to super-nice, approachable, and a great story-teller. He has an intriguing background for a technologist, having worked in script-writing (for reality TV!) in Hollywood, which explains the polish of his communications. You definitely want him to talk at your conference.

it also helps to own Serverless.com…

So why is Serverless framework catching so much attention right now? Serverless computing, or Function-as-a-Service, is hot, for one, but essentially It comes down to developer experience. Serverless solves a specific problem, which most developers using Amazon Web Services (AWS) Lambda run into- while it’s super easy to get started creating your first function and API, once you get beyond that, with more services to manage, AWS API Gateway is a pain.

The experience of ShoutOUT is pretty common.

“Prior to integration with the Serverless Framework, we had to do a lot of manual configuration on API Gateway and Lambda and deploying multiple services was really painful.”

The Serverless CLI, on the other hand, makes it easy to deploy additional services to production, and rollback if necessary, without a bunch of manual configuration steps. Written in Node.js it’s simple to get started with an npm install. Languages supported so far are Javascript (the Node.js framework), Java and Python.

Serverless.yml define functions and event sources that trigger them, as well as any other resources to be used. This manifest creates a single AWS CloudFormation template that then deploys the service. Other Serverless constructs include handlers, which are pointers to functions or events.

Some nice early enterprises wins include Reuters and Coca-Cola. Patrick Brandt, Solutions Architect at Coca-Cola is on the record thus:

“The Serverless Framework is a core component of The Coca-Cola Company’s initiative to reduce IT operational costs and deploy services faster.”

In October 2016 Serverless raised $3m from Trinity Ventures and Heavybit. The Heavybit imprimatur for companies that focus on developer experience is impressive- previous investments include Stripe, PagerDuty and CircleCI.

if you’re interested in serverless technology you should join us at Jeffconf this Friday.

The Serverless Economy, why you should care about serverless

Lambda kicks in, a serverless world made of messages

“Serverless and the the death of devops”. Can you not?

Travis CI is a client.