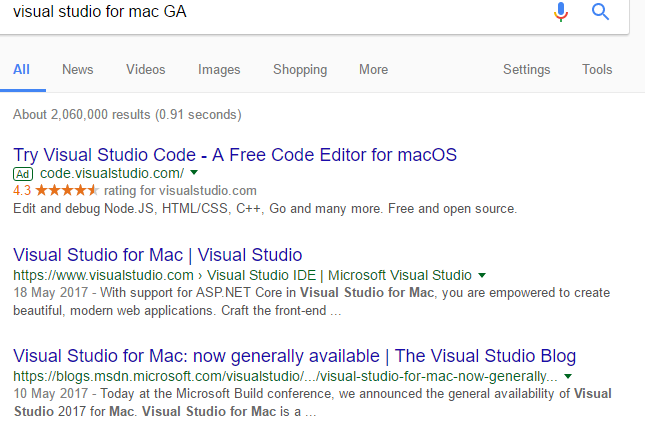 We’ve have been thinking about Visual Studio Code, Microsoft’s relatively new open source cross platform code editor, a fair bit lately. One reason Code is on our radar is that it keeps coming up positively in conversations with developers and making surprise appearances in demos at grassroots tech conferences. Folks from modern language communities really like the platform. It’s hit a sweet spot in that it’s lightweight and snappy like a code editor but offers some neat features that you’d expect from an IDE – in code completion and debugging tools.

We’ve been seeing a fair bit of commentary like

Nice. So similar to my setup. Except I switched to VS Code recently – it's really fast, easy to write extensions, and great for typescript

With a weary pessimism I thought I'd give @code a go. Turns out it's bloody awesome!

Last week this post from Nodesource – Getting Started with VS Code for Node.js Development – bubbled up on twitter. It points out some useful utilities for Node developers like npm Intellisense and Debugger for Chrome (from within the editor), Docker support and keymap overlays for other editors. Keymaps is crucial to winning converts given so much of development is muscle memory.

Code also benefits from excellent support for TypeScript, a superset of Javascript developed by Microsoft. The project is led by Anders Hejlsberg, who is famous for building shit developers like to use, having been the lead lead developer of TurboPascal and then C#. TypeScript has shown notable growth in RedMonk’s most recent Programming Language Rankings.

But other languages are definitely in the mix too. Go devotees for example have been upbeat about Code. Given all the buzz, we were expecting to see some Code get some attention at Microsoft Build – so we ran some numbers to piggyback on the event. 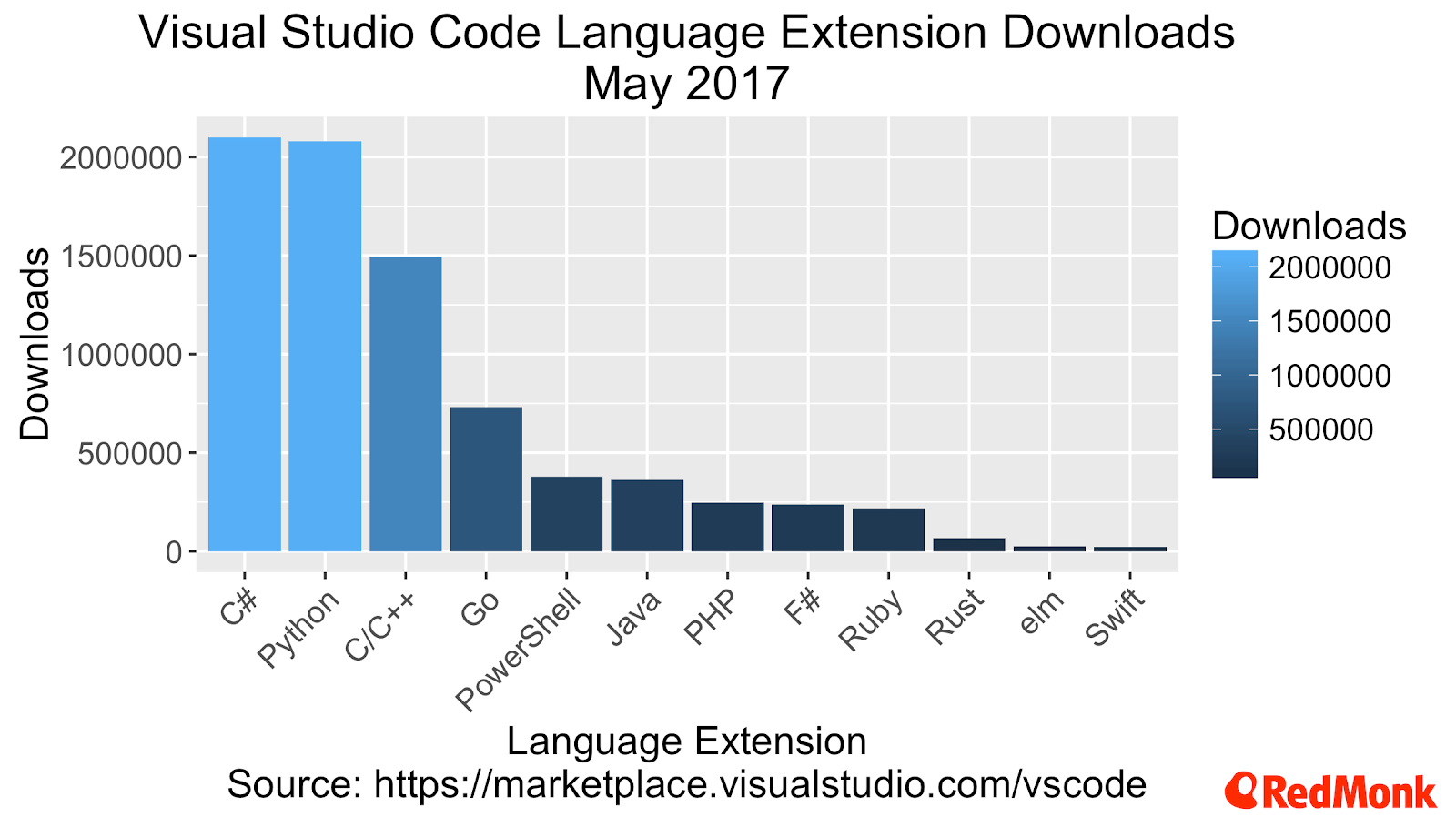 Python is very interesting because of the language’s strong growth in data science. Integration with Jupyter Notebook, which grew out of iPython, could be a key driver there. Jupyter allows uses to create and share docs including live code, data visualisations, and associated text. It’s increasingly popular in data science and machine learning communities.

So given there is broad-based interest outside the C# community, like I say, we expected more attention at Build. In fact Code got very little attention at all, which was kind of surprising and a bit disappointing. The conference used to be for Microsoft technology true believers but these days it’s a more open affair, reflecting the open platform positioning of Microsoft CEO Satya Nadella, going to where the developers are. Obviously you can’t pack in every technology in a conference, much though a grueling 3 hour keynote can make it feel like you have. To be fair Microsoft announced general availability of Visual Studio for Mac at Build, and it deserved attention. A full function version of Visual Studio running on the Mac is kind of a big deal, at least in circling the wagons. Some folks on any good development team are going to be using Macs, after all.

But in terms of the Developer Experience funnel, attracting new users to Microsoft platforms, clearly Code is the new hotness.

I spoke to Ilya Dmitrichenko, developer experience engineer at Weaveworks about recent innovation in editors and toolchains last week. He charts the beginnings of networked IDEs doing something a standalone editor couldn’t as coming from ARM, of all companies, back in 2009. It released an IDE that made it easier to target a variety of hardware form factors without the usual low level gorp and downloads. One of the reasons we chatted about networked toolchains was the announcement that Red Hat is acquiring Codenvy to harden its openshift.io online IDE, CI/CD automated container deployment story.

But back to Code – Dmitrichenko said he liked the editor, but felt it closer integration with Azure Functions to be really compelling for him. The serverless community is hungry for an experience offering better integrated cloud based IDE/dev and test – Paul Johnston goes on about this all the time. GitHub is heading in a similar direction with Atom and the GitHub marketplace, with an code editor integrated with cloud based back end services. We shouldn’t forget AWS, which acquired Cloud9 but has been rather quiet since, apart from the odd teaser by Tim Wagner, GM of Serverless about online testing, integrated with the developer experience.

The opportunity is in client + services. If we ask ourselves who is going to be the Ubuntu of developer infrastructure it’s going to be a platform that best packages both local environment and hosted developer services. Code, rather than Visual Studio Classic is (arguably) best placed from a Microsoft perspective to make a play like this happen. And the Code team is making some savvy adwords purchases even if they weren’t featured heavily at Build 😉

AWS, Red Hat and Microsoft are all clients. Microsoft paid T&E to Build.