After clearing a series of obstacles – some mundane and irrelevant, others much less so – it’s time to publish our bi-annual RedMonk Programming Language Rankings. As many are aware, these rankings are a continuation of the original work that Drew Conway and John Myles White first looked at the question late in 2010. From a macro perspective, the process remains the same: we extract language rankings from GitHub and Stack Overflow, and combine them for a ranking that attempts to reflect both code (GitHub) and discussion (Stack Overflow) traction. The idea is not to offer a statistically valid representation of current usage, but rather to correlate language discussion (Stack Overflow) and usage (GitHub) in an effort to extract insights into potential future adoption trends.

In January 2014, we were forced to make a change to the way that GitHub’s rankings were collected because GitHub stopped providing them. This quarter’s run features the first major change in how these rankings are conducted since then. To help understand how this change was made and why it was necessary, here’s a brief explanation of our GitHub ranking process.

The Process to Date

In our early language ranking runs we pulled the data directly from GitHub’s Explore page. GitHub ceased publishing the rankings there, however, and in 2014 we found a new data source using the GitHub Archive public dataset on Google BigQuery.

Our query counted repository languages (excluding forked repos) by aggregating total created events. Though now defunct, our previous query was similar to the one in this Stack Overflow answer.

This query worked from 2014 through our last run in June 2016. However, we again needed to adjust our query due to changes in the GitHub Archive table structure as well as changes in GitHub’s API that impacted GitHub Archive’s language data. These changes provided the opportunity to evaluate our data source.

In June 2016, GitHub and Google announced a second public data set for publicly licensed repos. We initially explored the languages table on this dataset as our new potential source. This data had that benefit of providing multiple languages for a repository based on the number of bytes used per language, which in theory could give a more accurate representation of languages rather than using a repo’s primary language.
However, we found that the results from this data were suboptimal because:

We also briefly explored the GH Torrent project. While this was an interesting data set that could be a great resource for curious individuals, its licensing prohibited our use in this instance.

This ultimately led us back to GitHub Archive. Though we could not access the same language data that we had previously, we were able to query language by pull request. Our query resembles the one GitHub used to assemble the 2016 State of the Octoverse.

We endeavored to make the new query as comparable as possible to the previous process.

The primary change is that the GitHub portion of the language ranking is now based on pull requests rather than repos. While this means we couldn’t replicate the rankings as they were before, the results were generally correlated with our past runs and were the best method available. On the positive side, it also eliminates the most common complaint regarding the rankings historically: that measurements by repo might overestimate a given language’s importance – JavaScript, most frequently.

The obvious question in the wake of this procedural change concerns impact. How do this quarter’s rankings compare with our last run? There are two answers to that: first, the change within the GitHub portion of our rankings; second, the change in our rankings overall with the unaffected Stack Overflow results weighted in. In both cases, it depends on where in the Top 20 a language is ranked. Within our Top 10 languages, for example, the average ranking change for the GitHub only results was a significant but not enormous 1.2 spots. In the back half of the Top 20, however, the average change in a language’s position was 5.7.

When we weight in the Stack Overflow results, predictably, these differentials are somewhat more modest. Within the Top 10, languages moved on average only half a spot. And even in the much more volatile back half, the end change in the overall rankings was a mere three spots.

This is, to be sure, the most significant change since we started performing this analysis. But as mentioned, after testing various approaches, this is the one most tightly correlated and thus offering the greatest continuity between our previous rankings.

With that, here is the first quarter plot for 2017. 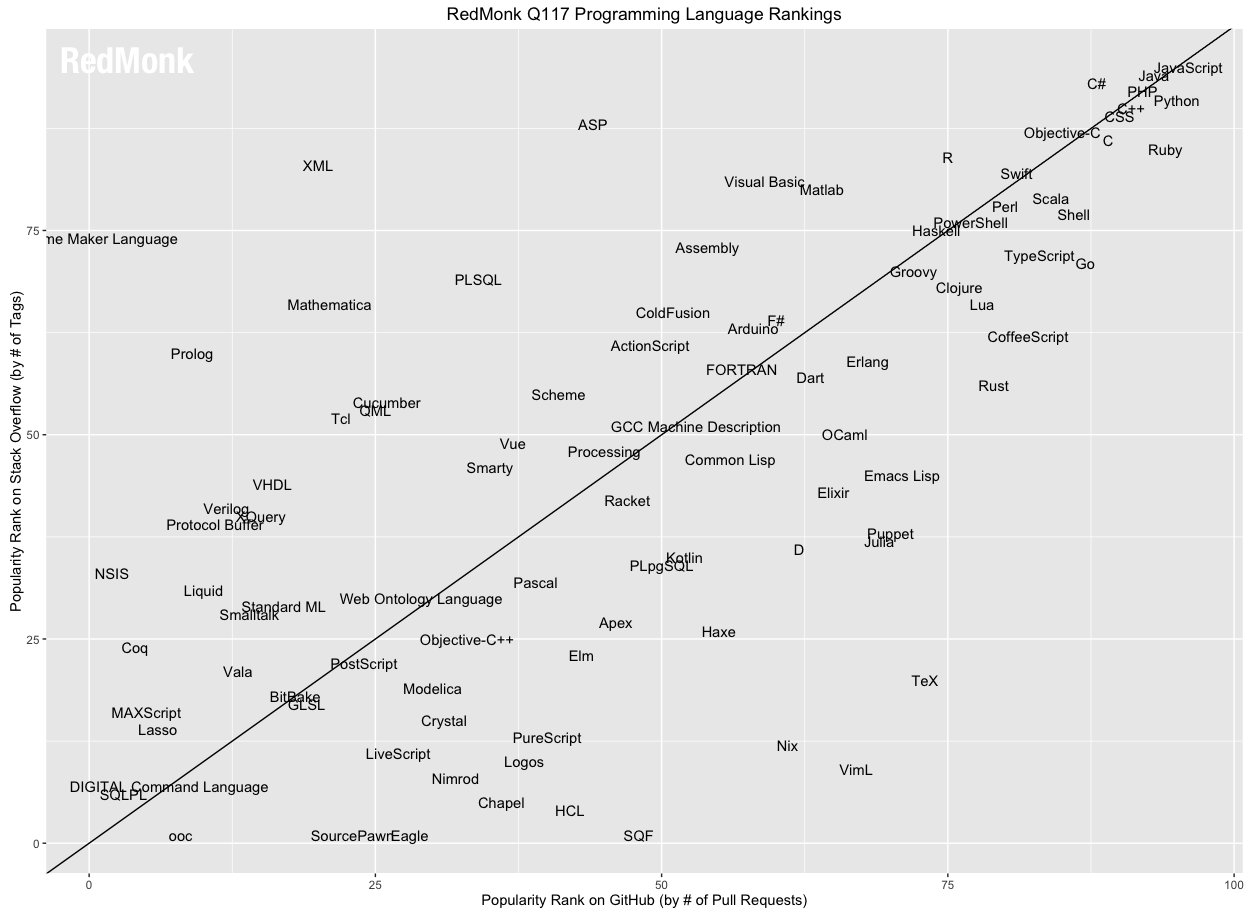 Besides the above plot, which can be difficult to parse even at full size, we offer the following numerical rankings. As will be observed, this run produced several ties which are reflected below (they are listed out here alphabetically rather than consolidated as ties because the latter approach led to misunderstandings). Note that this is actually a list of the Top 23 languages, not Top 20, because of said ties.

Updated process or no, JavaScript and Java retain their respective positions atop our rankings. The lack of movement in JavaScript is particularly notable given that some argued that measuring by repo overweighted JavaScript’s actual significance versus a metric like pull requests, the basis for the new query. PHP has dropped a spot for the first time in the history of our rankings, but remains enormously popular even at the number four spot. Out of all of the languages in the top ten, on the other hand, Python benefitted the most from the change in our GitHub ranking process: where the average movement was one spot, Python jumped three spots, hence its leapfrogging of PHP. Outside of that, the only really notable movement in the top ten was Ruby dropping from five to seven.

Lower down in the order, however, things get more interesting. A few comments on languages with notable movement, in no particular order.