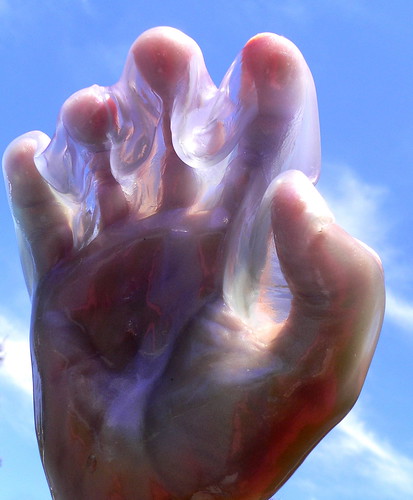 Rather than writing a once and future post I wanted to jot some thoughts down about legacy portals and what to do with them. Portal reskinning is a growing business – both Deloitte and Accenture, for example, have built practices dedicated to using Adobe technology to make existing enterprise applications and their portal front ends less painful for users.

That’s right- less painful for users. Products like IBM WebSphere Portal and SAP Netweaver Portal were supposed to bring much improved user interaction models to enterprise IT, but unfortunately traditional systems-focused IT departments, rather than user interaction specialists and their web brethren, did the work. People like Josh Porter generally weren’t invited to the party. Portals were built to support IT systems and data, rather than users. Portals were part of what Adobe calls a system-centric view of the world. Portals had glue, if not concrete poured all over them.

What kicked off this line of thought? The Adobe 09 analyst conference in San Jose. At the time I said:

Who would have thought Adobe’s big enterprise play would be portal replacement? #adobe09

The canonical example of a systems-centric view of the world is SAP, and its customer base. Everything is about data and process, not user experience. Its no surprise that SAP portals are hardly renowned for being user friendly. That is not to say they aren’t valuable, they just aren’t very flexible. So it is time to rethink SAP Portal is a management interface rather than a user interface?

Major portal vendors such as IBM and SAP have now implemented AJAX in their portal suites, offering whizzy eye candy transitions, and enhanced performance, reducing screen refreshes across for example text search using frameworks such as DOJO. This is all to the good, and certainly dramatically improve the portal user experience, but the goodness of AJAX should not be confused with the goodness of Web 2.0 more broadly.

Web 2.0 is more about information than presentation, and the social aspects of information sharing at that – and that’s where plasticity is required. The other issue about reskinning for better interaction is.. who actually does the work. For obvious reasons services vendors are pitching the idea most strongly. Meanwhile it is lines of business, not IT, that are most keen on moving to a user, rather than systems, focus and are driving budget accordingly. Of course reskinning and rethinking user experience is a great services opportunity, which explains why firms like Deloitte are interested, but also may explain some user recalcitrance. “Spend money on software we already bought? Why do that?” The answer of course is business value.

I recently met with Kevin Cochrane, chief marketing officer at Day Software [client]. I thought he described the evolution of content management and user interaction I am describing really well. So let me quote him at length.

“The trend that happened between convergence of portal and content management needs to continue. In the early days of web everything was hand-rolled. Along came Interwoven etc but the presentation layer was build your own, and so more complex. There were also simple use cases- but because the CM vendors were stabilizing their back ends, they couldn’t invest in the front end. Then you saw the development of an independent portal market – plumtree etc. You also saw application server maturation and consolidation, with the likes of Silverstream going away.

The fixation then was on a portal deployment model. But that took away the design aspect of a lot of web sites. Notably “tailorability”. It was partly a reaction – personalised design was just too expensive. Now we’re seeing the pendulum swing the other way. We have these web 2.0 apps, with javascript we can add all kinds of flexibility.

Pendulum swung that way. So now – people are saying I want a portal framework that I can have easy lightweight customisations”.

Deloitte’s play was particularly impressive. The slideware may not have been as slick as Accenture’s – but Jaco Von Eeden, the guy that runs the practice, was outstanding. Here are a couple of quotes from his presentation:

“Virtually every ERP deal we see we ask where can we use Adobe. We have a reasonable revenue flow and fantastic pipeline.”

Accenture and Deliotte were pretty well aligned in terms of overall message though. Accenture’s ERP practice representative Joel Osman, said what we’re seeing is a second wave of rich internet apps. For more on this see this presentation. You can also check out this case study from IDC about Accenture’s work improving Well Fargo’s apps.

But the real killed quote came when Osman said:

“We’re at the back end. victims of systems-based computing”

But where does user interaction end and process begin? Very good question, it turns out.

Lets take a look at Southwark Council in the UK, which signed up Vangent to build its one touch citizen services apps and call center. Adrian Blair ran the project, and he has form in using Adobe to improve public services. What does he say?

“We use SAP CRM. When citizens call, you have to create a ticket etc, as per the system, but that’s not what the process is [italics mine], for example there is a car blocking my way.

SAP Portal is used for application access. for its exchange infrastructure and business warehouse and so on, but Adobe is our choice for user workflows. We have a user-driven desktop built in flex, which is user centric rather than system centric.”

The problem keeps rearing its head… what is the difference between a user interaction and a business process? How do we define where systems focus ends?

Ray Wang wrote an interesting post the other day which comes at a related problem from a slightly different angle – Why Every Social CRM Initiative Needs An MDM Backbone.

In order to cut through the high noise to signal ratio, organizations must determine how best to manage the complexity and scale of data being generated

Master Data Management is very much part of the Systems first view of the world, and as such is an extremely valuable concept. Corporations thrive on the idea of a single view of the truth, which is the MDM space. In the social context you want to know exactly who a person is – entity resolution. But we’re talking about user interactions right?

With other users, or with data, or with both?

Like Adobe Flex Builder and Flash, Javascript can offer a surprising amount of user interaction function, and folks like John Lister aka Jayfresh can build it. But wait that guy is a web designer, isn’t he? Stat!

Read my lips-no Java skills required. At the risk of pimping a client, Mindtouch is all about this model. It has plenty of customer examples using the Mindtouch wiki as the pane of glass for Javascript-based integration, offering flexible data and user interaction services.

AS I said at the top of the page, this post is more a placeholder than a finished article. The industry doesn’t have an agreed language for the new interaction focus (“RIA” just doesn’t cut it). Suffice to say this will be a research focus over the next couple of months.

“the trend that happened between convergence of portal and content management needs to continue” – early days of web. Interwoven etc- the presentation layer was build your own, more complex. But there were also simple use cases- because the CM vendors were stablising their back ends, they couldn’t invest in the front end. Then you saw the development of an independent portal market – plumtree etc. Also saw app server maturation – silverstream going away etc

New growth portals. The fixation was on a portal deployment model. But that took away the design aspect of a lot of web sites. Tailorability. It was partly a reaction – personalised design was too expensive. Now we’re seeing the pendulum swing the other way. We have these web 2.0 apps, with javascript we can add all kinds of flexibility.

Pendulum swung that way. So now – people are saying I want a portal framework that I can have easy lightweight customisations. JSR 168 – that’s where our new version plays.