Last Thursday I was supposed to be moderating a discussion about standards at the second Cloud Camp London. I had to pull out at the last minute, because of some prior family commitments I should never have considered breaking. To cut a long story short Benjamin Ellis stepped in and saved my bacon. Not only did he moderate the session with Matthias from Zimory, but then he summarised the event for me in the post below. I love the people of the web, who really live the Contribution Society. Benjamin is a top top bloke! He is also an awesome photographer! 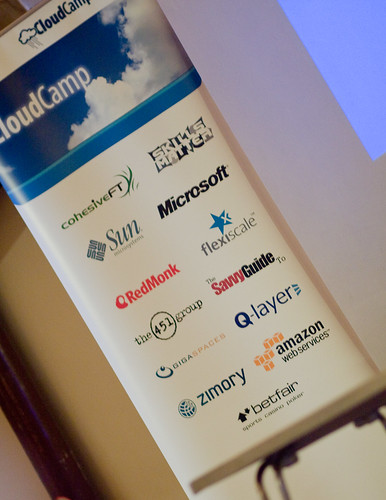 Thursday night saw the second CloudCamp in London. It was a sell-out gig, with the Crypt packed to capacity. The fact around 250 people came out on a cold wet London night to discuss Cloud Computing is a testimony to the growing fascination with all things cloud. One way or another, it is a phenomenon that will disrupt the status quo. 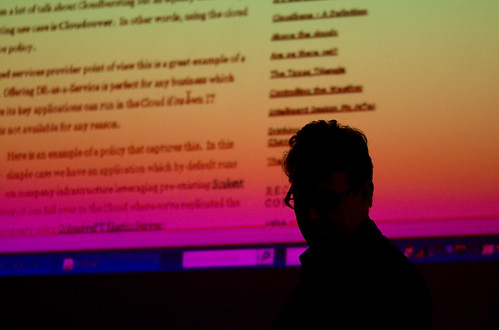 The evening kicked of with a set of brutally speedy presentations. 5 minutes per presenter. Their velocity and compactness makes them hard to summarize, but let me try:

Simon Wardley, now with Canonical, was first. Always an interesting presenter (I might have been biased by his love of ducks and the fact I had his power supply). The fact that I could use his power supply on my laptop is a testament to the importance of portability and the power of re-use, which was the theme of Simon’s presentation. It continued his XaaS theme from the last CloudCamp, making the case for the importance for standards. Simon also argued for the importance of transparency in cloud services (cf. recent happenings in the financial world as the result of opacity). Who owns and operates the equipment isn’t always obvious in cloud services. An immaculately timed 4 minute 59 second presentation.

Joe Baguley, CTO Europe of Quest Software, was next up, asking if the cloud is really green. Here we are, putting 20kw of power demand into a rack, then trying to keep it at 22’c. Less than 0.3% of the electricity used makes it through to the processor. Rather than looking at how much processing each watt gives, Joe argued that the new question people will ask is: for each service is use, who much energy is consumed? Server power consumption doesn’t scale linearly with use. An idle server still consumes huge amounts of power. Even so, virtualization doesn’t give the power savings many expect. Even worse, while VDI (desktop virtualization) is trendy, it moves even more processing into the datacentre and uses lots of RAM, and therefore even more energy. Then you throw away the old desktops… definitely not very green. Joe’s advice? Go green: take a hybrid approach, re-use and rethink. Oh, and make sure you get the (power) bills. (4 minutes 50 seconds).

Paul Watson, of Newcastle University, has been doing some work on behalf of Arjuna. Throw away the cloud infrastructure, or get cloud from existing infrastructure? Paul suggested that you should create a private cloud, and spread the load. Put service agreements on sharing resource in place, and then share computing resources between different departments to make efficient use of (unused) computing power. Then link that to public cloud services to cope with peak demand. Paul’s model suggests the idea of many federated clouds (both public and private) – a kind of cloud of clouds. Interesting.

Duncan Johnston-Watt, Enigmatec CTO, performed a canned demo (using Elastic Fox), showing how the cloud might be used for disaster recovery. Apart from his very correct use of the work “momentary”, the demo was a little pedestrian and long.

Thankfully Cisco’s Phil Dean hopped on stage to tell us what CIOs want from the cloud. A reminder from Phil that CIOs are seeking to be business leaders. Accord to him CIOs like Cloud’s offer of consistency for all users, service simplicity (cost and 24×7 operation) and service orientation (for business agility). They don’t like the loss of control, risk management issues (business continuity and security) or migration and hybrid operation. I found myself thinking that perhaps CIOs don’t understand Cloud Computing yet, and are still wrapped around the axle trying to understand Web 2.0. Anyway, cloud needs a business focus says Phil.

Zimory’s Philipp Huber used his commanding stage presence to talk about what pervasive cloud computing might look like. He wheeled out comparisons with the energy market. Why does the energy market run so smoothly? Multi-tier supply – energy products, distributors, resellers – and 100+ years to get where they are. Both private and commercial demand, with well educated customers, and well established infrastructure standards (fuses, plugs… ). SLAs and quality standards, operating in an open market. How does cloud computing compare? New cloud providers emerging daily. Increasing demand, but driven by early adopters. The early majority still has major concerns about security and stability. Standards are emerging, but still not providing a seamless experience. Full interoperability is still “in the clouds” – fundamentally it works against the cloud producers, since it reduces stickiness. Billing models need to be transparent between clouds too, and easy to understand – again, something that might not be immediately attractive to providers.

Rhys Jones (from RBS) laid out an IT department perspective in “Clouds are cool (so why aren’t we using them yet)”. Power is nothing without control was his cautious note, before laying out some key benefits from his perspective: Switching from capex to opex is attractive. Cloud can do things that couldn’t be done before (due to resource constraints). Cloud gives ability to scale down (relevant currently). Someone else can do the optimisation, leaving you free for higher value activities. Rhys doesn’t see the cloud as just another form of box rental. Because of the cost structure, it enables rapid, low-risk trials – that opens up new possibilities for innovation. He noted that moving to the cloud is a cultural shift, and changing culture is hard. In corporate IT, demand outstrips supply, and the demand has always been upfront.

Wayne Horkan, Sun Microsystems CTO (UK and Ireland), talked about the global cloud infrastructure build out. A little unsurprisingly, he sees cloud computing as becoming dominant. He cited bandwidth figures from Amazon showing S3 using more bandwidth than Amazon web sales – I’m not sure that’s a proof point, but interesting none-the-less. Wayne said, “This is the Klondike gold rush…” – the building wave is starting to feel that way. Wayne drew out a layered model from network up to operations…. “What’s the next stack?” open source he says. Wayne ran out of time and was gracefully ushered from the stage by a gracious host.

Neil Hutson, senior director at Microsoft, outlined their vision. Drawing a linear platform evolution from mobile, to client, to server, to cloud, Neil outlined the changing economics of software towards a consumption based model. He pointed out that Microsoft already run their own data centres, and have done for a long while, supporting their Live offerings. He outlined the Microsoft Azure announcement, and the themes contained in it: standards and simplicity, and cited support for HTTP, REST, SOAP…. The Azure announcement has been covered just about everywhere, so nothing new to add. Only time will tell where it goes.

After a quick break, the gathered masses split into three groups. I facilitated the “standards and interoperability” open space with Matthias Kohl of Zimory. It was a highly interactive 45 minutes, touching on a broad range of issues. Although the discussion kicked off focusing on potential standards for system images, with a view to enabling portability, it was very clear that portability requires significantly more than that. The variations in storage architectures, database technology and support for network features all contribute to blocking migration between services. It is unlikely that a single body will be able to standardize all of these different aspects, and even if they could, standards bodies have traditionally struggled to keep up in rapidly developing spaces.

Just the ability to move the code doesn’t enable migration between different providers. Organizations are also reliant on operational procedures and interfaces. There are a huge number of dependancies. The group talked through some real world examples, during which Amazon got a good deal of air time. Do they have the momentum to become a de-facto standard, with a Amazon clones springing up around the place?

A standard image format might provide a base level of standardization, but there is a risk that the industry then gets caught up in a ‘lowest common denominator’ model that throttles much of the unique innovation that the scale and speed of cloud computing allows. There was a consensus for a pragmatic approach: a layering of APIs, standardizing a layer at a time.

The hardest thing about moderating was stopping the conversation when we ran out of time. Even warm pizza wasn’t enough to stop the conversations that went on late into the evening.