In case you missed it, we’ve been publishing videos from Thingmonk over the last couple of weeks. They are well worth checking out. Thanks so much for the sponsorship InfluxDB (time series platform for metrics and events). Thingmonk is a developer conference, but it’s also an inclusive tech conference, which covers a fair bit of ground in terms of Internet of Things (IoT) topics. We try not to assume too much knowledge, but don’t patronise people either, when it comes to learning new concepts and technology. So what even is a distributed commit log and how is it different from a message bus? This year we were really lucky to have a couple of brilliant talks to walk people, stepwise, through modern event-driven messaging architectures to help explain that question and more. 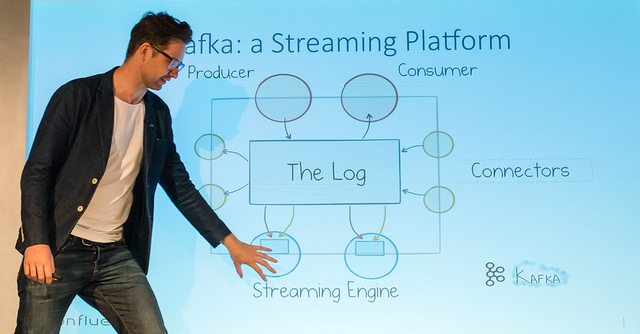 Ben Stopford works at Confluent as an Engineer and Systems Architect on Apache Kafka. Again – while he may work on a company that specialises in delivering Kafka for the enterprise, his talk was very much about education rather than sales. How does Kafka work, what is it, and what makes it so powerful? Kafka, originally developed by LinkedIn as its central data pipeline, has been getting a ton of attention from cloud companies and the customers they serve.

Clemens Vasters has form at Thingmonk. Last year he stepped in to give a presentation with nothing more than a whiteboard and about 10 minutes of preparation. This year though, he had a bit more time to work on his slides, and gave a really helpful primer on streaming analytics, event hubs, notification hubs, IoT hubs, and relays. Clemens may be lead architect on the Microsoft Azure cloud messaging team, but his talk is a long way from being a sales pitch.

If you watch these two talks you’ll certainly be a lot smarter by the end. Demystifying streaming data and more. Everything you ever wanted to know about this stuff but were afraid to ask.