Tracking cloud revenue numbers at major vendors is hard. As ever, financial reporting, for all its supposed rigour, can hide as much as it reveals, depending how and where things are reported. But one trend is inarguable – the share price premium for telling an effective story for cloud transformation.

To spotlight the cloud premium just check out IBM’s recent financials. On October 18th IBM reported revenues that beat expectations, with organic double digit growth in security and cloud. IBM’s share price jumped 8% on the news, its biggest jump in nearly 8 years. IBM claimed that cloud revenue for the quarter was $4.1 billion, but the reporting still seems opaque.Revenues overall may still be declining but IBM convinced the Street it is growing fast enough in the right areas.

To put the cloud transformation in even starker relief, in the same round of company reporting, as the FT pointed out – Amazon, Microsoft, Alphabet market cap gains add up to a new IBM. 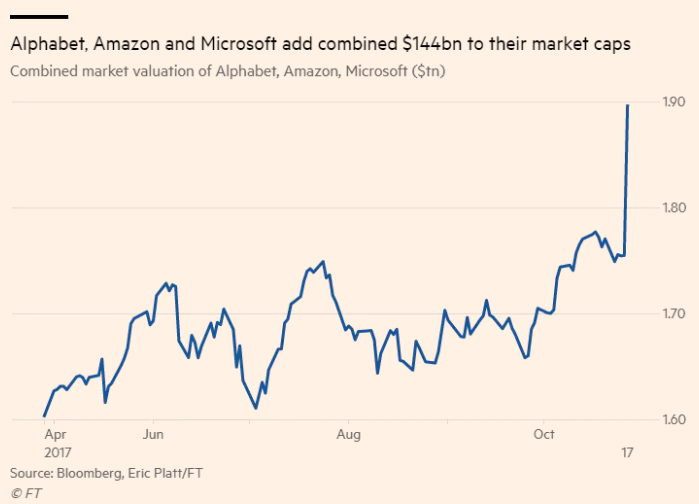 Microsoft is now in a good place. The Satya Nadella revolution is now translating from halo effect to sustained financial performance. Having said two years ago that it would reach $20bn in cloud revenues by 2018 it actually breezed through that mark this year. Azure revenues grew 90% during the quarter. Microsoft’s Office 365 growth rates have now fallen to 42%, but that’s on a sizeable customer base – 120m active users. Microsoft has also now the subscription corner, driving more revenue from Office 365 than traditional licensing.

Alphabet does not as yet break out Google Cloud Platform revenues, but the company has seen some notable customer wins, as its Engineer to Engineer program helps it engage more successfully with lighthouse accounts.

Amazon unsurprisingly crushed it yet again. Q3 earnings for Amazon Web Services (AWS) were $4.57 billion. No SaaS apps, just Infrastructure and platform services. It remains the top dog in cloud, and if it does become the first trillion dollar company, it will do so not on the strength of its retail business, but the margins and upside for AWS.