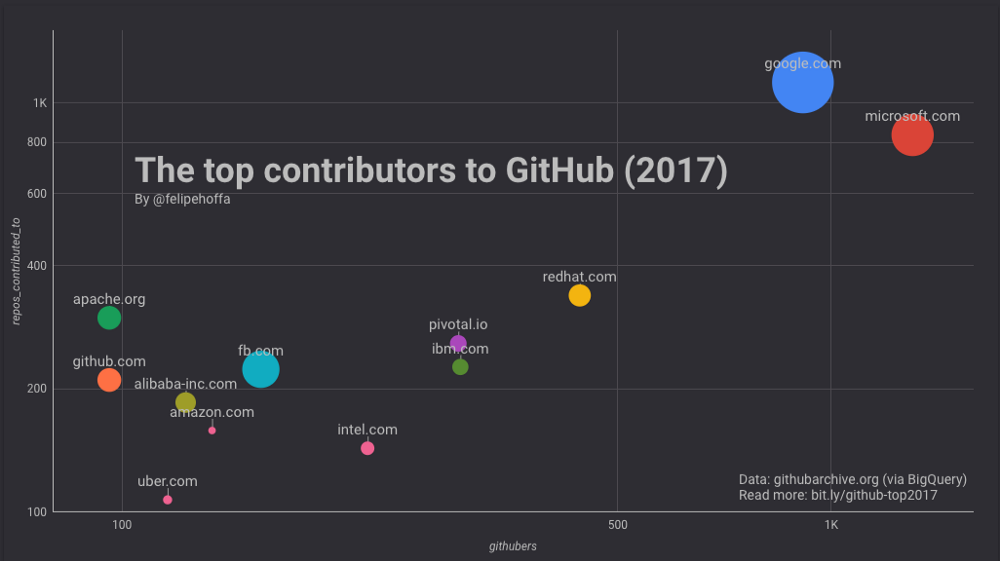 Yesterday Felipe Hoffa from the Google Dev Rel team published some interesting research looking at corporate usage of GitHub. Given my post on the danger of GitHub astroturfing yesterday I was keen to dig in.

“For this analysis we’ll look at all the PushEvents published by GitHub during 2017.”

So all the usual caveats on using GitHub data notwithstanding, and the limits of this particular analysis, Microsoft has the most contributors by some distance, some 45% more than than Google, but they’re working on a smaller number of top projects. Amazon Web Services meanwhile barely shows up as a contributor. Nothing really surprising in any of this, but even in 2017 it’s possible to sit back and marvel at how far into open source Microsoft is these days.

What is surprising on the other hand, at least at a glance within the limits of this methodology, is that Pivotal is currently contributing as much software to open source projects as IBM. Given IBM has built deservedly solid reputation over time as an open source contributor across various core infrastructure projects, and is at least 150 times bigger than Pivotal, this is fairly impressive. I noticed that in the twitter thread about the post initially only us.ibm.com email addresses were being counted, but it still really stood out, at least to me.

On the same thread was a pointer to another information resource gleaned from GitHub.

So I went to check it out. The site include corporate contributions by company names but also stars that individuals have earned and – holy shit – Sindre Sorhus. What can you say about Sindre Sorhus?

237, 644 stars? To be honest I couldn’t see how the maths add up with the lipis service. But well north of 100k stars at a glance on Sindre’s GitHub page is pretty amazing for an individual. Sindre curates awesome, a curated list of awesome lists. Nearly 68k stars, 314 contributors. Avajs (great name, by the way) looks like his “day job”.

Hats off to Sindre for making things people like.

disclosure: AWS, IBM, Microsoft, and Pivotal are all clients, but this analysis is independent.

related: So where all the GitHub link farms at? Astro-turfing in software development.