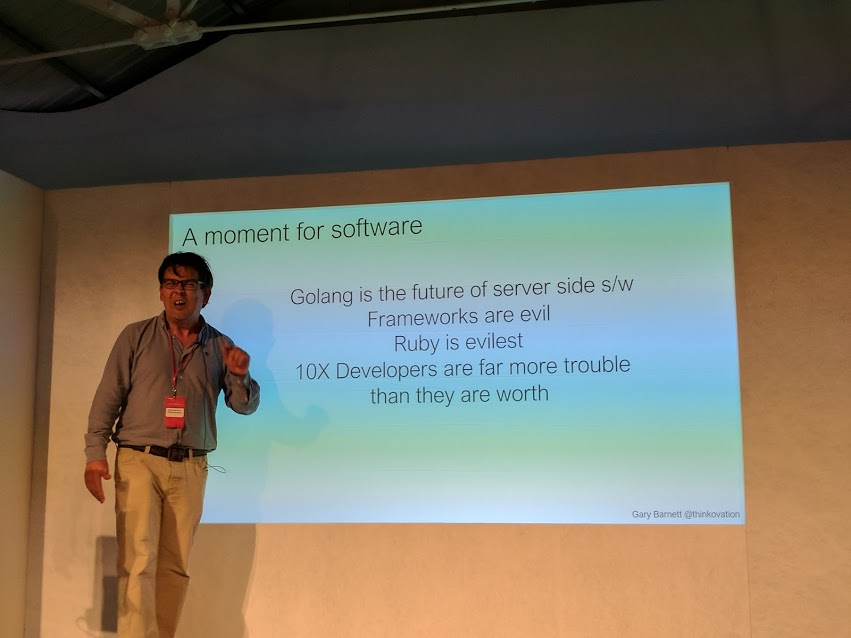 We had a set of fantastic speakers at Thingmonk. Thanks to all of them.

Andy Stanford Clark, IBM CTO for UK and Ireland, kicked off Day 2 with an explanation of the “Digital Twin” concept we’d called out as an umbrella theme for the event. In case you’re wondering what on earth that is, for a crisp high level explanation I highly recommend this talk by Chris O’Connor at IBM. Stanford-Clark however brought his own perspective – he argued that once you have a digital twin of your physical assets you can begin to run what if scenarios. Take trains for example. Schaeffler makes bearings: it creates digital twins of its assets in order to help customers evaluate safety and speed across rail networks. Airbus is now creating digital twins of its places from its original engineering diagrams, which allows for simulation. How will the plane act in different environments – such a 90 mile an hour headwind? Multidisciplinary teams are working on the same model, which makes it more effective, and in that sense digital twin begins to echo moves we’ve made in software engineering towards agile development. Stanford Clark said digital twins allow for mass customisation for industry.

Next up was Yodit Stanton, founder of OpenSensors.io, a London-based startup focusing on commercial building, environment and asset monitoring. Wired called it “the twitter of sensors”. It has 100 paying customers – a lot more than many of SF-based VC-funded companies we talk to. An important leader the UK tech scene, she talked about the Top 10 reasons IoT projects fail.

Next up it was really cool to see a collaborative talk between folks from different companies – Charlie Isaacs and Martin Gale from Salesforce, and Andy SC from IBM again. Our first demo of the conference saw how Node-RED could be used to wire up sensor events to Salesforce backends. Great “story” too – making sure nobody opens your wine shipment on its way to you. It’s not the first time we’ve had cross vendor demos at Thingmonk but it is unusual at tech events. Mixed environments do however reflect the reality customers face. So that’s kind of cool.

Next up we had Gary Barnett, a fellow analyst at another firm, but at Thingmonk talking about his role as CTO of the Air Sensa Network. At any good conference there is at least one talk that leaves you crying with laughter. This was the talk that did that. The Air Sensa goal is simple, even if achieving it is very hard: to make sensors that can measure small particulates – sub 2.5 micron – for under £100 per unit. Why bother? Mostly because we’re not measuring this stuff… Barnett said there are only 15 sensors that can measure these small particulates in the whole of London. Today, he said: “40M britons are living in areas of illegal air pollution levels etc”. Gary’s talk was funny, biting, and warm, all at the same time. When the videos come out shortly. I highly recommend you watch it, if only for brutal Ruby takedown, and gems like:  10x devs are nice to have around but don’t let them put anything into production.

Our next speaker was Boris Adryan. Very smart chap, spoke about organisational structure and tech teams. He echoed Stanton – the team structure should be interdependent, simple command structure, tactics, shared experience as a team. One fascinating insight was that the Lancaster Bomber in World War 2 had self-selected. The individuals worked out what the teams should be, and who should have which role.

What would an IoT conference be without a talk about Railways? Kamil Baczkowic spoke on Busting train delays on Great Western Railway. His company Luminate provides software and sensors for the national railway system. They don’t call what they offer “digital twins” but process interlocking, and standard data models allow for process interlocking, and predictions and what if scenarios across a complex network. What will the impact be if maintenance happens in Didcot, on a particular bank holiday?

“If you’ve got 15 problems to deal with, you want to focus on the ones that are causing the biggest problems”.

We then had a guest appearance by 11 year old Femi Owolade-Coombes.

A truly amazing young man – he recently went to Bangladesh to teach street kids to code. He has also had his code running in a space station. We’ll be seeing a lot more of him I am sure.

Joe Pindar, Director Strategy, CTO Office at Gemalto, talked about Blockchain secured IoT. His talk was really refreshing in that it eschewed Blockchain hype in favour of trying to get core concepts over to an audience of mixed experience levels. The IoT is inherently distributed, with an Implicit underpinning of trust, which actually maps pretty well to Blockchain.

We ended day two with a talk from my friend Rob Carter, CEO of Fieldmargin. Stuck for a talk title we told him just talk about The farm’s Digital Twin. He ran with it. Much like the Air Sensa talk, this one had a crucial payload. Farming isn’t getting any easier, exacerbated by climate change and poor land management, and yet in order to feed the world’s population we’re going to need to increase yields significantly. VCs are waking up to this market. Tractor companies are positioning themselves as data companies. There is a company growing microherbs underneath Clapham Common. Farming is increasingly data-driven. Some of the sources here are really fascinating. Even 5 years ago the idea you could get an aerial view of your farm every six weeks was faintly ludicrous. Today, with satellite imagery and drones, it’s very much a reality. Then apply AI to identify areas of water stress for example. Why not use lasers to kill weeds? We’re going to need “Robo crops”. Robots are getting very good at picking even soft fruit now. The implications for jobs are serious, but we need greater farming productivity, and IoT is going to deliver it.

And that was a wrap for Day 2.