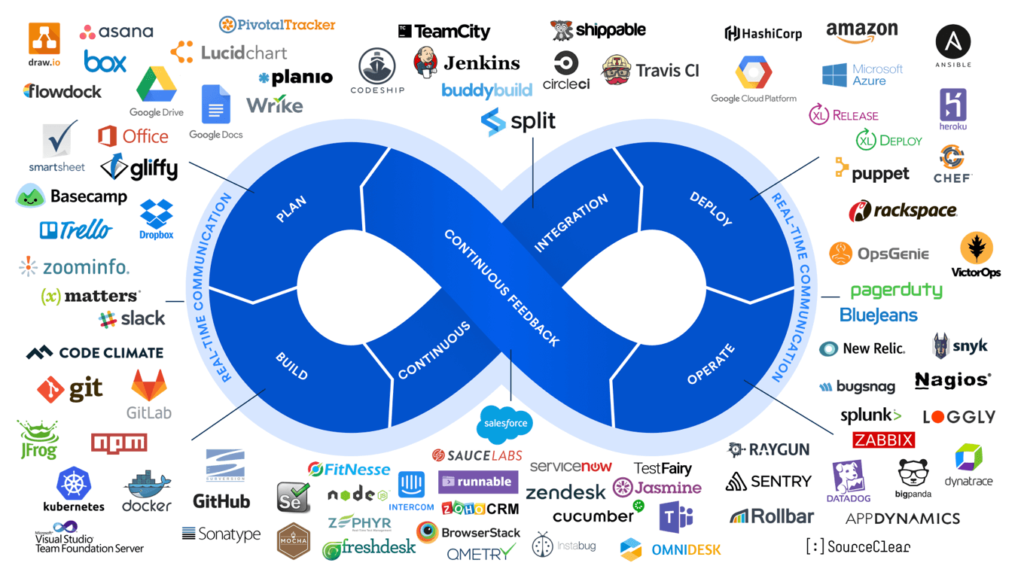 The play to become the standard industry backplane play for Pipelines and DevOps – integrating tools across the application lifecycle, ALM 2.0 if you like – is heating up. Today Atlassian launched DevOps Marketplace and the list of launch partners is impressively comprehensive. The vendors above represent a who’s who of modern dev and ops tooling across functions Atlassian defines as– Plan, Build, Continuous integration, Deploy, Operate, Continuous Feedback, and Real Time Communications.

I wrote recently about Github Marketplace, which launched with 14 partners:

“We’re seeing massive fragmentation of tools choices, which is a problem for engineers, not just buttoned up enterprises. But GitHub increasingly is the glue by which different toolchains can be integrated. Travis CI, one of the early marketplace vendors, runs on the GitHub API. Heroku Pipelines, same. We need tools that allow us to embrace open ecosystems and its associated fragmentation in new ways.”

That is the game – to own pipeline integration in a fragmenting tools landscape.

GitHub has a significant advantage in terms of social coding, given its central position in open web-based software development. After all, what modern developer doesn’t have a GitHub account? Open source projects have increasingly migrated to GitHub for exactly that reason. Python considered Gitlab as an alternative, but decided in favour of social dynamics. One issue for GitHub is that it’s marketplace is almost too platform oriented, many of the initial partners are betting so heavily on GitHub that they may be less relevant to companies that aren’t all in – namely enterprises.

Because while GitHub has an enviable beachhead in open development enterprises are a different kind of animal, and as ever, tend to favour solutions that can (at least potentially) run on prem. For all the sound and fury of the public cloud uber alles crowd, we still see enterprises with a bias to on prem. There is a reason that GitHub has an on prem product, GitHub Enterprise. Some of the partners however are cloud only. It is early days for GitHub in the enterprise.

Atlassian, by stark contrast is very much an enterprise software company. For all the rhetoric about not having any salespeople Atlassian has a well defined sales motion, and enterprise value proposition based on the comprehensiveness of its offerings – Bamboo, Bitbucket, Confluence, Hipchat, Jira, etc . Atlassian is a classic integrated suite play.  I was speaking to a major credit card company recently, and the Chief Architect said that while he preferred GitLab, Bitbucket was good enough for his teams’ needs as the organisation was an Atlassian shop. Atlassian also today introduced Stack, with standardised pricing to make it even more attractive as a DevOps oriented suite option.

Atlassian has an interesting line to walk. On the one hand, in order to become a significant platform player, it needs to make it easier for partners to sell to it’s customers, it is also not going to stop making acquisitions and filling in holes in its offerings. I thought it’s purchase of StatusPage was masterful for example – for all the codified best practice about communicating downtime and outages. But from a partner perspective Atlassian is potentially the fastest way to win enterprise customers with enterprise budgets.

Marketplaces are great for small vendors because they potentially avoid the problem of not being on the customer’s approved supplier list. Atlassian is already an approved vendor at a huge number of enterprise accounts, so being in its marketplace has fairly obvious advantages. GitHub Marketplace vendors will also benefit from this effect, although to a lesser extent given GitHub’s smaller enterprise footprint.

IBM’s Bluemix platform has its own approach called Open Toolchains covering partners including PagerDuty, New Relic and Slack, but it’s certainly less comprehensive, and is aimed pretty squarely at IBM Bluemix runtimes.  Bit of a shout out to our client PagerDuty here- it’s definitely doing something right – it’s one of the first ports of call for integrated DevOps plays.

We’ll see other vendors look to package pipelines as a marketplace offering.  Bit surprised we haven’t seen more of CloudBees here given Jenkins penetration in the enterprise. Pipelines underpin CI/CD and DevOps and tooling fragmentation continues apace. But for now Atlassian looks to be in a suite spot.

IBM and PagerDuty are clients.