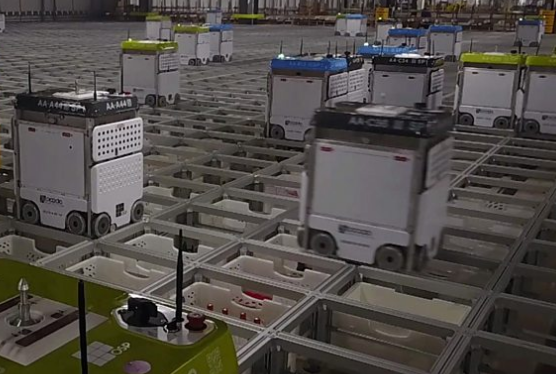 Ocado is doing a bang up job of representing itself as a tech leader. I go to plenty of tech conferences where the customer slots are sort of embarrassing, thinly disguised adverts for a brand that really don’t respect the audience. But Ocado is different – it puts forward interesting speakers with plenty of technical experience, providing lessons based on deployment at scale. I wrote a post recently about Ocado lessons on data culture, based on a talk at Google Next. Today at New Relic FutureStack, again in London, Ocado Technologies COO Anne Marie Neatham gave a fascinating talk about the company’s warehousing operations and future as a supplier for retailers wanting to compete with Amazon.

Ocado says it is the biggest dedicated online grocery retailer in the world – though as ever competition is fierce. It plans to up its game by becoming a full service logistics supplier to other retailers in other geographies, with a modular warehouse system and full stack IT to manage it. Ocado always served other retailers in terms of delivery- see its Waitrose relationship for example, but the technology game has moved on a fair bit, as has the threat posture. Competing with Amazon pretty much sucks – High Streets are littered with the bodies of bankrupt retailers, and it’s not going to get any easier. And of course Amazon isn’t just online retail, it’s also an incredible logistics company.

Ocado has recently rolled out a new generation of bots at its distribution hubs that are very futuristic. Annoyingly it is not embeddable but you should check out this video on the BBC web site to get a glimpse of the future of warehouse automation. The bots are all monitored using New Relic, which is particularly noteworthy given the monitoring company has only recently begun to manage on prem hosts, let alone robots and cranes. Yes cranes – I talked to Neatham after her keynote and she explained that using New Relic they had identified some latency between their bespoke management software and the speed at which cranes put things away in the warehouses. Solving a problem like that for a 24×7 operation could lead to savings of between 30k-80k GBP annually. Those kinds of logistics savings can add up quickly, and it’s a solid win for New Relic. Ocado also uses BI, or AI, to reduce food wastage – claiming that at .75% it’s about a quarter of the industry average.

Neatham is also well cognizant of the potential social costs of automation. She said jobs like putting fruit into baskets all day long are not exactly fulfilling and that Ocado was able to employ more than 12000 people precisely because it is investing in technology. 950 of its employees work in tech, and from what I have seen it looks like a fulfilling and interesting place to work from an engineering perspective.

“Everyone in the management team has a background in coding, When you have a technical background it’s easier to hire technical people.”

Neatham might have added – particularly when you can give great talks to a technical audience.

Does this case study suddenly make New Relic a player in IoT? Nope. But smart vendors create market opportunities based on the weird stuff that customers do with their customers. If I was New Relic I would be introducing Ocado to all my retail and logistics customers – the story is compelling, and has the benefit of being future facing and real.