Yesterday I joined Red Hat to help launch its new Open Innovation Lab in London. The space is by the Monument, which is kind of appropriate – if you want to kick off a conversation about leaving legacy behind why not do so just a few yards from the site in Pudding Lane where the Great Fire of London started?

One reason Red Hat was keen to have me speak was that not only is it my job as a RedMonk analyst to help organisations understand modern software development communities and practices, but I also run a coworking space, and have run literally hundreds of developer events in Shoreditch, which is home to some of the most disruptive companies in the UK.

The Open Innovation Labs are Red Hat’s answer to programs run by Pivotal and IBM, designed to help enterprises transform how they do IT, becoming more like Web Companies. Pivotal, in particular, has done a stellar job of industrialising the transformation of development organisations, teaching companies test-driven development, pair programming and agile. Companies come to Pivotal offices in locations such as San Francisco, South of Market, and London in Shoreditch, and come away inspired with a new way of working and thinking.

Red Hat is also now inviting its clients into dedicated spaces where they can work closely with engineers, learning about modern development pipelines, deploying to Cloud Native technologies. It is important to get out of the office to learn new skills, and a little exposed brickwork and concrete seems to make people amenable to change. Also insanely good coffee. Culture is more likely to change with a change of scenery, that opens people up and makes them feel creative and responsive. Buildings and neighborhoods and density of talent are key to organisational creativity.

Think of Apple, for example, a buttoned up culture in so many ways, but insisting that architects of its building create spaces that will force serendipitous “informal” meetings between employees.

The OI Lab in London isn’t huge – accommodating about 25 people on an average working day, but the approach is on the money. Start with ideas, move quickly to proof of concept applications, and learn the skills to harden them for production deployment. Of course, it being run by Red Hat there is a strong focus on OpenShift, but that makes sense given the solid momentum Kubernetes has in the market.

While we were there the latest incumbents were Motability, an excellent and surprisingly high scale social enterprise allowing people in the UK with disabilities to lease a car, scooter or powered wheelchair in exchange for their mobility allowance. Motability isn’t technically hip, but it gets amazingly high customer satisfaction ratings, and wants to offer better digital services to its clients.

One of the points Red Hat made during its presentations, which would give many traditional enterprise IT organisations a bad case of the heebie-jeebies, was that its OpenShift PaaS platform has been through 3 revisions in 5 years, the last a major rewrite from the ground up, packaging Kubernetes for enterprise adoption. One of the points of my talk however was that life comes at you fast in cloud native, with new open source technologies, battle hardened by web companies, emerging at an almost comical rate. Bottom line – technology is going to keep changing, and we’re now in an environment where IT’s value is in being a forager, developer and packager rather than a farmer. IT can’t just sit back and use and maintain WebLogic and Oracle database as deployment runtimes. Not if they want modern apps that appeal to modern consumers, built by modern developers (they don’t have to be young though!) on modern platforms.

If you’re an enterprise thinking about modernisation strategies I recommend you engage with a company like Red Hat, IBM or Pivotal that has a space where you can hang out, meet startups, peers and enterprises that are looking to create new ways of doing things. Obviously a standard methodology for change isn’t going to hurt. 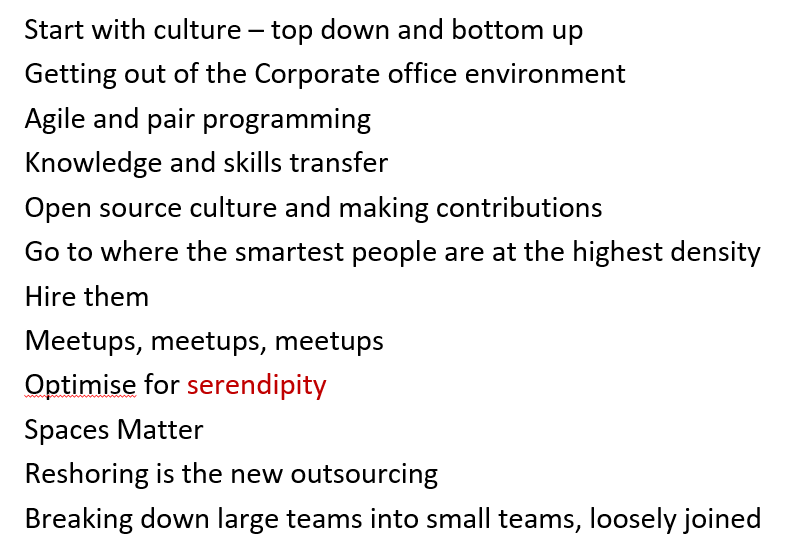 I really enjoyed giving the talk, and I include the slides below.

Disclosure: all the vendors mentioned are clients.