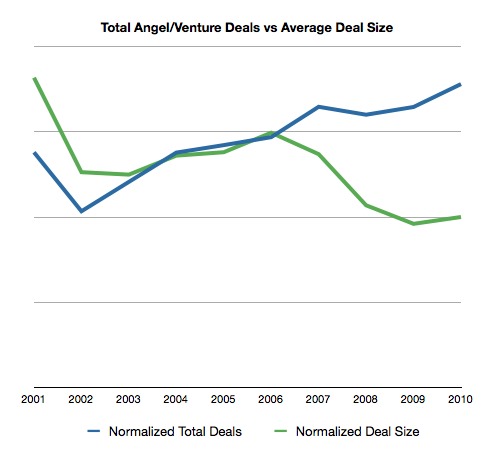 I recently helped out with the inaugural Serverless Conf, and gave the closing remarks. The event was held in a warehouse in Williamsburg, New York. Organiser Ant Stanley of ACloudGuru did a great job of organising his first conference.

There are plenty of smarter people than me explaining what “serverless” is – Paul Johnston, who spoke at the conference, has a great blog series on the topic. To me however serverless computing is primarily interesting for three key reasons:

The chart above suggests a couple of interesting things about the discontinuity in 2007. Deal size shrunk, while average number of deals dramatically increased. Why? The obvious answer is the launch of AWS, and the attendant creation of Y Combinator and the accelerator model, rather than traditional VC-driven company creation. Given that serverless hasn’t exploded so far, it might seem overblown to draw comparisons with the introduction of AWS. And yet. And yet. There is no doubt that today smaller teams can make a bigger impact than ever before. Consider Instagram or WhatApp, which sold to Facebook for $1.9bn with only 55 employees. Serverless attempts to industrialise developer impact- if we’re going to see the first single employee billion user multi-billion dollar valuation startup it’s likely they’ll be building on something like AWS Lambda. Could we see another similar discontinuity to the chart above, with deal size cratering again, and many more flowers blooming? It’s a reasonable scenario. Certainly Amazon’s serverless implementation would hope to enable that. Serverless is fundamentally about permissionless, the ongoing direction of travel for all IT decision-making.

As Sam Kroonenberg, CTO of ACloudGuru put it:

“AWS Lambda is to compute what s3 is to storage.”

AWS is pretty confident about serverless advantages. Its Serverless GM Tim Wagner made it pretty clear that he expects serverless to put severe pressure on orthogonal markets – such as Docker-based infrastructure, partly because he expects the model to drive more testing into the cloud. Serverless is not solely an Amazon phenomenon. IBM has adopted an open source model with OpenWhisk, while Google is building a set of services around Firebase, originally a database as a service it acquired. Microsoft has taken a hybrid hosted/open source approach with Azure functions.

Competition has been sufficient that Amazon took the surprising step of announcing it was to open source a serverless framework called Flourish. On that more details as they emerge.

Joe Emison works at DMGT building B2B applications and services. He gave a great presentation which was frankly pretty scathing about AWS.

“In this case i don’t think Amazon has the best option for any of the services out there. It’s about the front end. AWS serverless is largely about back end processing, which we have largely outsourced. To me, the advantage of serverless is the key is faster iterations, and a move to fatter clients”

Emison argued that AWS Lambda is focused on enterprise adoption, with the attendant complexity that necessitates, in order to boost revenues. For Emison serverless is simply the most effective way to establish product/market fit. Emison recommends a stack of services designed from the ground as developer friendly service for high scale ops, including  Algolia (for search), Prerender (Javascript SEO), Sendgrid (email delivery), Cloudflare (CDN), Google Firebase (data storage and associated services), Auth0 (authentication).
Beyond product/market fit serverless potentially means not needing to penalise customers for being interested

30 day trials of SaaS products that expire before you’ve had a chance to schedule some time to actually try them. Such an anti-pattern.

That is why I think serverless could be a big deal. It’s the economy, stupid.
[update: While not intended to be completely comprehensive, one point I had originally intended to include in the post was that serverless may not be AWS only, but the approach clearly makes the most sense when you have a ton of resources at hand, with automation to support it. Mary Branscombe called me on it over the weekend and her comments are worth including verbatim:

Surprised you didn’t mention how serverless rewards massive operational efficiency of hyperscale. it’s a byproduct of cloud at a different unit of scale. by being that good at offering images you become able to offer a unit of compute at a much granular level. which means there’s an operational aspect to evaluating services, not just the technology. Can a business ever be efficient enough to make running serverless themselves economic? I’m doubtful, frankly. A model where essentially putting images on machines is something we do very fast and we don’t need to pass on the cost.