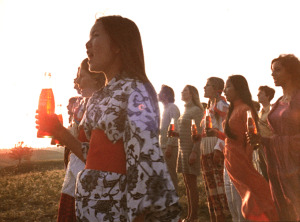 I recently had a jam-packed week in San Francisco, attending Dreamforce and running IOT at Scale.

For the one or two of you that weren’t actually at Dreamforce, it’s kind of hard to sum up a conference with so much stuff going on. With that in mind it’s probably best not to try.

I will however say that the Internet of Things space in the Developer Zone was really solid. Salesforce doesn’t do things by halves, and IoT Pied Piper Reid Carlberg nailed it again. Salesforce is doubling down on wearables, which I think is pretty smart, given that at least two industries – healthcare and insurance – are going to be utterly transformed by people wearing little devices that monitor their behaviours. The old mantra you can’t manage what you can’t measure is coming to a human body near you. Everything from heart rate to blood sugar level to amount of exercise taken is going to be used by insurers and healthcare professionals in making decisions. Whether or not you see this vision as dystopic or utopic it is coming and coming soon. Here is Amanda Mackenzie, CMO of Aviva, talking about the revolution.

The technology exists to guide dietary choices and identify environmental risks to health, too. Spectrometers that scan food, walls or carpets for allergens will help relieve suffering among those with particular sensitivities, but also have the potential to help everyone keep a check on what they’re putting in their bodies. Again, insurers can track positive behaviour and reward it. Far more importantly, so too can doctors.

But one of the most interesting demos in the IoT section was from eBest, a Retail mobile services company. The demo involved putting a phone into a vending machine, using the onboard camera to track merchandising – ensuring for example that a Coca Cola supplied drink cooler in a retailer was only full of Coca-Cola Company beverages rather than competitor offerings. The app could also use image recognition to potentially ensure all drinks are properly facing forward and so on. Beyond the business implications I was struck by the development approach – the transactional services were running on Force.com, with the the image recognition on Heroku. Hai micro-services!

If I am really honest, what most excited me seems to have been a misunderstanding. The eBest rep said that “Coke had bought eBest” so I was taken aback. Wow Coca Cola now has a software-based retail services arm. Software is drinking the world, indeed. Sadly a Google search indicates that this idea was indeed a misunderstanding – Coke did not in fact like the solution so much it bought the company.

The example outlined above however does show a world beyond wearables with a very clear business case, bridging traditional enterprise transaction services with image recognition running on a PaaS. If I was Salesforce this is exactly the kind of example I would encourage, bridging as it does the Force.com and Heroku worlds. If you’re a traditional ERP company customer on the other hand, this kind of deployment would be a significant structural challenge.