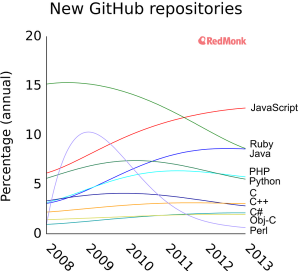 Yesterday my colleague Donnie posted this chart, to immediate effect. Hundreds of retweets later, with developers rubbing and nuzzling into the data like cats to catnip, and I still wasn’t sure what the data meant.

Donnie had originally noted that it represented falling market share by Ruby, which is seemingly obvious from the graph. And yet…

And this is where I need to be careful, because Donnie has a PhD in biophysics, while I am merely data curious. I am sure the post he will write will clear everything up

But in the meantime the graph as far as I can really shows just what a mainstream phenomenon GitHub has become. While just a couple of years ago GitHub was still heavily skewed towards the Rails community, which had grokked the value of the social coding platform, today Ruby is just one of the languages significantly represented there.

Rails developers were the new Kingmakers that helped propel GitHub to dominance, but now others have joined the party.

The free wheeling Post Open Source Software (POSS) folks churning out Javascript libraries are still growing their share of the total platform, but everything else is seemingly stabilising.

One reason Java is now so well represented is that the open source foundations – first Eclipse and then the Apache Software Foundation – are now onboard.

The movement of entire communities to GitHub is best represented by the Perl graph. At first glance the chart screams “Perl is cratering.” But in fact what are seeing is 21000 Comprehensive Perl Archive Network (CPAN) projects being ported to GitHub in late 2009.

That said, according to this data composed by Adam Bard, we may indeed be seeing some softening of Perl on Github.

When I look at the chart above I see GitHub emerging as a mature platform, used by a broad range of developers, communities and technologies. GitHub is no longer just about Web Development, but rather all mainstream development.

Git is hard to use and grok, but GitHub made it social and consumable by a broad range of constituencies. Which is why its going to hit 5m developers by year end, according to Donnie.

In summary the chart above is beautiful but dangerous. As far as I can see it shows us that Github is now not about outliers. The Social Coding model is now mainstream. Forking isn’t scary anymore.