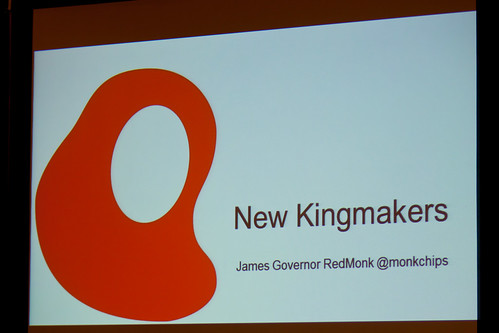 Just as it is every year May was insanely busy in the tech business. With the Spring Conference season there are plenty of major shows such as IBM Impact, SAP Sapphire and the Adobe Digital Marketing Summit. I was involved in all three of these conferences – either on a speaking, or consulting basis. What can we learn from the directions these firms are taking, in terms of their events, themes and approaches?

The single most significant trend to mention is that IBM and SAP getting serious about courting software developers, rather than simply focusing on purchasers. Adobe on the other hand, is moving in the opposite direction- focusing less on tools and developers and more on line of business buyers, in particular the marketing department. Adobe is emerging as the exception that proves the rule: RedMonk’s long term contention that developers are the most important constituency in IT is clearly on the money. They are the New Kingmakers. 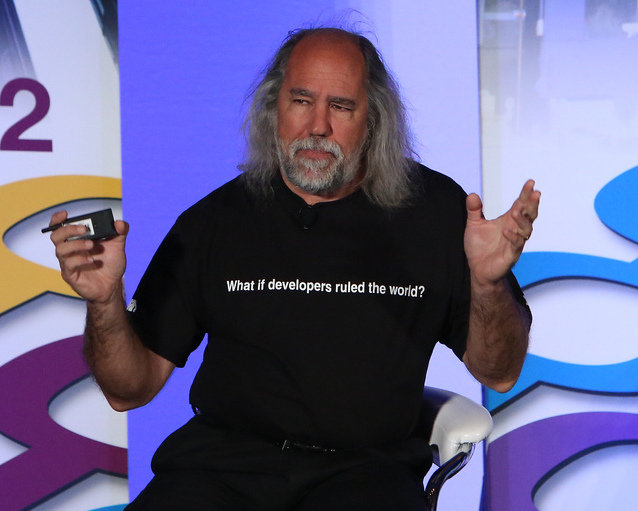 At Impact IBM ran a fun, well-attended, developer unconference again, and gave out t-shirts that said “What if Software Developers Ran the World?”

On the back of the shirts was the rejoinder – “They do” – pretty aggressive wording from IBM Corp. Seems appropriate to use Grady Booch as a model in the picture above. Of course a t-shirt and an unconference don’t get you in the game- but the WebSphere Application Server Liberty profile, a lightweight Java application server based on Stackless Stack principles, new commitments to help customers build and make money from public APIs, and some interesting new mobile development and management tooling in the shape of Lightworks (a new IDE not from the Rational stable)  are all engaging plays. Is IBM the natural choice for the grassroots Web developer? Far from it. But it’s now recognising the fact it needs to appeal to a wider developer pool. REST APIs is just part of the story.

In his keynote Jerry Cuomo, WebSphere CTO, announced the new Cast Iron Live API Management service, designed for coordination, publishing and consumption of API assets. Who defines the success or otherwise of an API set? Developers of course. Cuomo said something I found particularly interesting.

APIs are the company’s public persona.

In an age where developers decide which platforms win (see Apple as exhibit A, or Microsoft in the last round), they also begin to dictate which brands succeed. No wonder marketing is becoming a key driver of new application development spend.

SAP – Developers are the new influencers

Unfortunately I wasn’t able to make it to Sapphire in Orlando this year, but I did some consulting with SAP before the event around developer experience (DX). The team running the plays is clueful – it’s one thing to arrive for a consultation and find the client has created a load of strategy and marketing material which badly misses the mark… its quite another to walk into an engagement and think wow – all I can help with is polish. So props to Anne Hardy, Thomas Grassl, David Brutman and Mickey Gaffny. SAP knows it needs to be more developer friendly if it wants to grow its business organically- to that end it is trying to lower barriers to participation in a number of ways. SAP has not quite taken the final step in making all its tools freely available, but it has created new developer-friendly pricing models, new onramps using Amazon Web Services, and a new startup program to encourage HANA use cases. To my mind the most interesting developer opportunity for SAP would be to reposition its Project Gateway as an API management platform. HANA the in-memory database is certainly interesting technology, but its a data analysis rather than developer platform at this point.

One thing I really liked about SAP’s pitch to developers is that it tries to clearly articulate something important- how will the developer make money from the SAP ecosystem. SAP may not exactly have an Apple style app store, but like SAP it certainly has tens of thousands of customers that expect to pay for apps. #

As I have said before, Adobe’s repositioning for the Omniture agenda makes sense in terms of business model and revenue, but it has created some collateral damage in practitioner communities. But rather than dwell on that I should just say a few words about the London Digital Summit. In short it was very good indeed. The content was fairly rich, and the focus on customers telling their own stories was refreshing. Oh yeah – the food was excellent, though the coffee didn’t match it. But the real lesson was in how engaged the audience was. Adobe has clearly tapped into something. The European digital marketing scene was seemingly waiting for a catalyst. I spoke to a lot of delegates and many of them had no prior experience of Adobe – they were largely Omniture customers. These folks were excited about by some of the integration between Creative Suite, Adobe’s CQ5 Content Management platform and Omniture analytics- A/B and multivariant testing has seldom looking so easy, or compelling. Adobe wants to persuade Marketing to buy more of its tools and if the inaugural European event is anything to go by, it has plenty of runway ahead. I have been to plenty of Adobe conferences that focused on developers, but I have rarely seen such a clear business message and idea how Adobe will make more money. Investors take note.

So IBM and SAP are moving in one direction, Adobe seemingly another. Of course its more complicated than that. IBM is investing heavily in digital marketing measurement and management tools as well as Adobe. It’s going to need a conference dedicated to those folks. And Adobe? You can perhaps afford to focus less on developers at a Corporate Strategy level when you have people like Dave Johnson, Andre Charland and Brian LeRoux running community efforts on the ground – from the Nitobi acquisition, PhoneGap is an extremely strong developer community – the data is unambiguous on that score. And Apache is making friends in the Apache community.

Developers are the New Kingmakers. That’s now received wisdom from major corporations, not just outliers like RedMonk. Its a great times for developers and engineers, whether in Silicon Valley or the Fortune 500.

disclosure: as per above, all three companies are clients, and I carried out engagements with the vendors relating to all three events.