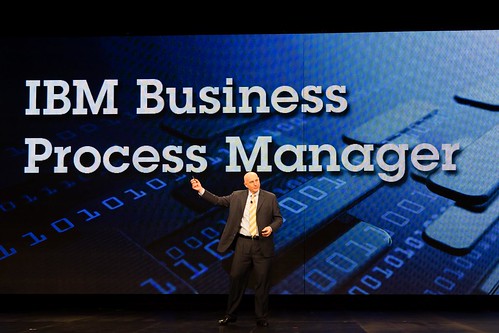 “This is some of the most beautiful enterprise software that’s ever been released. When you talk about information management at scale, then beauty matters. Consistency matters.”

Phil Gilbert, IBM senior vice president, describing Business Process Manager 7.5 at Impact 2012. When I wrote up IBM’s Impact business and technology conference last year I noted that Phil Gilbert is an executive to watch at Big Blue. Progress in the interim confirms the view that is he is a significant agent of change. Gilbert, who joined IBM in early 2010 when it acquired Lombardi Software, brings a different perspective to IBM, and he is clearly making an impact on the company’s development culture. I have been an IBM watcher for nearly two decades and I certainly can’t remember hearing an executive from the firm talking so passionately about the need for beautiful software; and more importantly – striving to deliver it.

[update: As I have said before, I am not a dedicated BPM market watcher. It shows apparently – I seems to have run into some version control issues in this post. The eagle-eyed amongst you will have noticed that the forthcoming cut of IBM BPM is in fact v 8.0, rather than 7.5.]

With all the chatter today about the consumerisation of IT it’s easy to forget just how clunky the traditional user experience (UX) of enterprise software is – well, unless you have to use it, of course. In traditional IT the user is basically treated like a data entry clerk. But a more modern approach, learning from consumer IT, is to focus on flow and simplicity and the ability to manipulate the data that is already in the system.

My initial impression is that BPM 7.5 user interface is clean and well thought out. Funnily enough the web UI is crisper than the new IoS app, also unveiled at Impact. The new BPM release brings some consistency to a complex portfolio – 7.5  was a consolidation of more than 20 products, and 8.0 extends the model. Thus Tivoli Identity Manager is now embedded in the product, without looking like a spare part.

Of course flow is more than skin deep – a clean UI won’t improve a suite of poorly integrated products. It looks like Gilbert has been trusted with cleaning up the unwieldy bunch of tools IBM’s BPM-related tools had become, through years of both organic development and numerous acquisitions- with multiple workflow engines, repositories and user interaction models. IBM is never going to be a clean green field – which is what why ongoing decrufting is so important.

Internal integration will only get you so far though –thus one of the new features in 7.5 is much deeper introspection of SAP services. Of course IBM integration with SAP isn’t a selfless act. As Gilbert puts it:

Subtext: middleware and BPM flexibility are more important that apps. Hardly surprising when Oracle is the primary competitor – IBM likes to claim it doesn’t sell apps, so this reframing makes sense.

I have said that user flow is a function of user interface, and tool integration, but another crucial component is social. Lombardi was building social software before it became the new black – BPM should of course be collaborative, and 7.5 is built to provide context integration between lightweight twitter-like Activity Streams and more traditional BPM activities. Part of social is also just building for people: it is not accidental that in the toolset “forms” are called “coaches”, being there to coach the user through the experience. Gilbert believes in coaching but not micro management. One of my favourite moments at Impact this year was Gilbert’s response to an analyst that questioned whether adding Activity Streams to business apps wouldn’t just distract the user – he said you had to trust the user to manage their own work, and not try to micromanage them using tools.

“You can turn just off instant messaging, right?”

And IBM account managers looking for an upsell should be salivating at the opportunity to revisit current accounts in light of some findings of Gilbert and his team around one of the key modules in BPM – Operational Decision Support.

“We have reinterpreted the data. We thought it was business performance data, but its actually social interactions. Our customers have a huge amount of social data to process.”

Great opportunity there to sell Social and Analytics into IBM BPM accounts.

So IBM BPM just got social, in an age where social is winning. The Lombardi acquisition was already smart from a customer base and technology perspective but it’s also clear that it was an acquihire (a term used in Silicon Valley for an acquisition predicated on the talent of the acquired team).

We wouldn’t be RedMonk if we didn’t at least mention the developer angle – BPM now offers RESTful APIs, which makes it amenable to Web style integration – callable functions include Business Process Definitions, Process instances, Tasks, External activities and services, Users And groups, Saved searches and custom searches. The tool also includes a REST API tester, acting as a JSON or XML client, so developers can get a feel for the services and how to use them before development and deployment.

Is IBM Software suddenly all easy to use? No. But the BPM portfolio is looking increasingly clean and modern, with a smart guy running strategy.

disclosure: IBM and SAP are clients. Oracle is not.