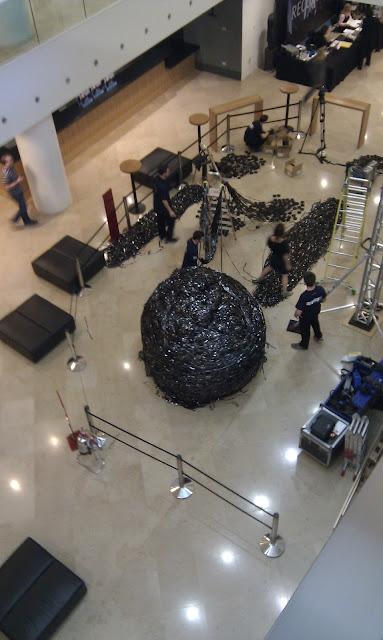 Last week I went to EMC’s EMEA Analyst Summit at my favourite London conference venue- Kings Place in Kings Cross. As a software guy I tend to focus on SpringSource and VMware, rather than the storage mothership, but I have been around long enough to know EMC pretty well. I like to take a historical view on the IT business, because context is everything. Something that struck me really clearly is that in many respects nothing has changed in terms of narratives, strategy and remorseless execution. EMC is even still arguing that tape is dead.

And that bottom line. What a bottom line. EMC just turned in its fifth record quarter in a row. Arguably EMC sailed pretty close to the wind from a market disclosure perspective, given the theme of the event was Record Breaking… just a week before EMC reported yet another storming set of numbers. In Q4 2010, EMC’s consolidated revenue was $4.9 billion, an increase of 19 percent from the year-ago quarter. Compare and contrast with Cisco – another firm you’d expect would benefit from many of the same trends driving EMC growth- I mean networks and storage grow in lockstep, right? Apparently not – Cisco has had a tougher downturn – missing forecasts, and hitting “air pockets”.

At EMC though there is apparently no such turbulence to report, although of course questions remain about future growth- with EMC giving the standard answer for Elder Companies- future growth will come from the mid-market.

If one single thing screamed out at me during the two day summit it was the utter seriousness with which EMC views Amazon as a competition. This should be no surprise- EMC was mentioning Amazon in 10-k filings while other major enterprise vendors had never even heard of AWS. EMC executives repeatedly dinged what they called “the bookstore”. For example:

“Amazon is clearly being subsidised by the bookstore at some level.” – EMC CEO Joe Tucci.

Funnily enough Tucci then went on to explain how EMC’s Mozy backup business gave EMC a better volume story. Well if you do plan to compete with one of the best retailers on the planet you better have volume in place.

“We buy more disc than anyone else on the planet. Our cost structure is based on cost of storage”

EMC is looking at workloads such as gene sequencing, geophysical exploration, media editing. It recently acquired GreenPlum, a massively parallel processing engine, built on commodity hardware – to accelerate its go to markets in Big Data. In terms of engagement models and vertical industry skills and experience EMC may lag IBM, but certainly not in terms of ambition. I would be very surprised if EMC didn’t quickly make a number of software and services acquisitions to bulk up there, adding to EMC Consulting. Because at least as far as the enterprise is concerned Big Data is all about domain knowledge. Thus for example, in rail transport Big Data can be used to lower operational maintenance costs – by tracking the roundness of wheels. Seriously- over time wheels go out of round, and become a little oblong, which lowers fuel efficiency, and increases stress on the track. IBM SVP Steve Mills totally owns this story when he tells it to customers and influencers. You see for IBM Big Data is a facet of a broader Smarter Planet play, while at EMC its a market in its own right.

A little surprising was that in talking to Elie Simon, GreenPlum’s EMEA general manager, it became clear he is sceptical about in-memory processing of Big Data. This seems a little short-sighted. Flash SSD, Nearline Disc, In memory, and yes even tape- are all going to be part of the Big Data processing landscape going forward. Check out SAP’s High Performance Analytic Appliance (HANA), for example. But Simon doesn’t lack aggression:

Where is the Developer?

EMC is all about selling to ops. But to succeed big in Big Data EMC will need to address not only more Line of Business folks, but also software developers. Luckily it has SpringSource in the arsenal for that. It also doesn’t have any direct relational database revenues to protect, so it can get busy with the noSQL wave. I wrote up VMware’s alternative database play here – VMware’s SpringSource Redis and Rabbit acquisitions: A Database Play is Emerging. If you’re more interested in a customer view check out this write up about how the Guardian is offloading workloads from Oracle to more modern data architectures – The Guardian: NoSQL EU. Don’t Melt The Database.

Because make no mistake – the cloud is all about developers (it certainly has been driven by them do far). With that mind its interesting that EMC CEO Joe Tucci said:

“There are two kinds of service providers – those that wont buy from us- google, microsoft, amazon, and then classic, evolving – telcos, hosters, outsourcers, pure plays that will, making EMC the platform of choice for service providers who share our vision.”

Record quarters is impressive, but I was perhaps less impressed by the fact EMC claimed last week was the largest product launch in the storage business’s history: 41 new products. Why? Because it felt responsive – IBM Storage’s big claim of 2010 was that it had undertaken a “complete refresh of the portfolio”. Seems EMC didn’t want to be seen as less revolutionary. To be fair some of the new products look solid, and more on that next week. In summary EMC is going great guns, and is well positioned for future group. It needs to get closer to developers- but it has some of the necessary pieces in place to do just that. See SpringSource Code2Cloud, which is being adopted by the same customers choosing VCE.

But Big Data- that is a record any storage company wants to listen to. In case you’re wondering the photo is of a big ball of tape.