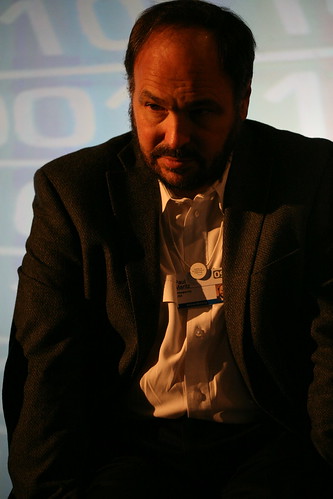 I was in Copenhagen last week for VMworld Europe 2010. Monday was an analyst briefing so I wasn’t particularly surprised when VMware CEO Paul Maritz spoke at length about his strategy to attract developers to VMware as a platform.  After all most analysts are curious about what happens next.

If he made the same speech at SpringOne this week it wouldn’t be out of place at all. That’s right. SpringOne – in case you missed it VMware recently acquired SpringSource- the enterprise Java company. Sadly I couldn’t make the show but I will be following up because I know there was significant news waiting to drop at the event. [My spar @cote captures the big Spring picture in quick and dirty fashion here– its a very good read. ]

Maritz said that other major tech firms were still “consolidating the client/server stack” while VMware wanted to capture a new wave of application development.

“Developers are moving to Django and Rails. Developers like to focus on what’s important to them. Open frameworks are the foundation for new enterprise application development going forward. By and large developers no longer write windows or Linux apps. Rails developers don’t care about the OS – they’re more interested in data models and how to construct the UI. Those are the things developers are focusing on now. The OS will fade into the background and become one of many pieces. We plan to do the best job of supporting these frameworks.”

Or as he said to the analysts:

“Our goal is to become the home of open source and open framework-based development”.

[contextual digression here: In case you didn’t know, Ruby On Rails, the framework for building web apps invented by David Heinemeier Hansson continues to be about as popular with web developers as Apple Macbooks, which is to say, very popular indeed. If you want good-looking data-driven apps Rails is a really good place to start. Frankly though, hearing Maritz name check Django was more surprising – the framework bills itself as “The Web framework for perfectionists with deadlines” but is not nearly as well known. There is a wave of content-driven application development building, and Maritz is evidently hip to that. Adobe acquired Day Software, which is playing in that space. This week Alfresco at its developer conference pushed the message that content applications was all about the web, rather that traditional Enterprise Content Management. I met with Eric Barroca of Nuxeo last week and he is extremely excited by the new developer-driven content management apps he is seeing emerge. Nuxeo had originally been positioned as an application – but now its very much a platform to sell to architects, rather than slideware purchasers. Eric said his goal is to become a platform to integrate innovation happening in open source content management. So VMware certainly isn’t alone. Maritz is evidently just the highest profile executive to really grok what’s happening. Two key standards seem to driving all this content management integration goodness- CMIS and OSGi. I should also strongly credit our client the Apache Software Foundation for providing governance for a lot of this open source code/innovation.] But back to VMware.

Given RedMonk is all about developers you can imagine I loved the keynote. Thought I doubt many people in the audience had a bloody clue what Django is. When @sogrady came online later that day he immediately asked on twitter:

it’s one thing to rubbish the operating system, but what about packaged apps? At the analyst briefing Maritz made it very clear indeed where he thinks competitive advantage lies.

In the final analysis they [purchasers] are not the people making strategic decisions in the business. Developers have always been at the leading edge, because that’s where business value is generated. Things that don’t differentiate you at a higher level will be SaaS apps – which will also be purchased at a higher level. The differentiated stuff you have to do yourself, and that means software development”.

In other words Maritz has pretty much the same core thesis as RedMonk: Developers are not an overhead – they are the new Kingmakers. I have to say I was pretty stunned. I still am. After years being an outlier RedMonk now has chief executives on side. And lets look at the folks Maritz has hired. Tod Neilsen is on the management team- he is the guy that built up the Microsoft Developer Network (MSDN) – you might have heard of it. Maritz himself is ex-Microsoft, and clearly knows developers. Paul Lukovsky is another ex-Microsoft guy in the fold – he understands what makes a successful API as well as anyone on the planet. Apparently back room enforcer Charles Fitzgerald is also in the mix.

That VMware can hire from Microsoft is not surprising. But poaching outstanding talent from Google shows the level of ambition, aggression and resources that VMware will throw into becoming a leader in application development, not just operations.

Meanwhile the SpringSource assets are already great basis for a solid developer story. Rod Johnson, who runs that part of the business for Maritz, is as smart a strategist as he is a technologist – and he is a scary good technologist – with Spring he managed enterprise Java development far less painful. He is a purist about developer flow- which is why he outsourced development of the Spring IDE to Mik Kersten of Tasktop Technologies. Kersten’s company also contracted with Spring to develop the new “Cloud ALM” platform announced this week. Spring ROO is a Rails-influenced environment for building Java apps, while Spring is also home to Groovy, the dynamic language. Another intriguing developer play in the Spring arsenal comes in the shape of RabbitMQ – a lightweight scalable message queue system popping up all over the place. Developers like it, and messaging is going to transform the web into a more a event-driven transactional model. I list these technologies because you may not know about VMware’s assets in the space. (Please check out further coverage of VMware SpringSource here, here and here.)

You can’t buy competitive advantage, but you can build it. That’s VMware’s line. I’d love to see Nicholas “IT Doesn’t Matter” Carr and Maritz in a debate.

The photo of Maritz, capturing something of his brooding nature, is by Robert Scoble. Please click on the link to see more of his flickr portfolio.