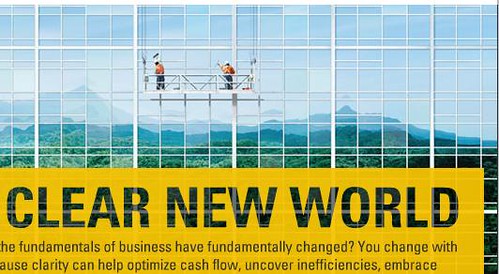 Earlier today I twittered about some interesting news from SAP.

Something that struck me very clearly reading the release was that this compliance application was being led by Business Objects, rather than SAP Classic. Now I haven’t had a chance to get an update on the direct from SAP but this makes perfect sense. For one thing- look at the speed of delivery. This is not a traditional SAP module development schedule. Also, organisationally Business Objects now owns Governance, Risk and Compliance.

We’re in a period in history where new laws are being made on the fly, which calls for more situational approaches to application development. The usual rules don’t apply. From that perspective you’d have to say the timing of the Business Objects acquisition was nigh on perfect. Now is a time for getting things done, not agonising over architectures and the need to support every possible international jurisdiction.

The new package consists of a software solution designed to help public sector organizations make the best use of economic stimulus funds by delivering transparency into spending, accountability and performance evaluation.

What is a bit surprising is that SAP evidently hasn’t realised it has a new umbrella marketing campaign for this kind of stuff yet. Where IBM has Smart Planet SAP has Clear New World. But guys- no one is going to join the dots for you (well except me, I guess). Where are the branding and marketing police when you really need them? If it was me I would be pitching this as the first app of the Clear New World.

The new app should hopefully bring some much needed clarity to spending in local government through the Stimulus. Well somebody has to track this stuff. Frankly I’d like to see the tracker as a cloud-based application that concerned citizens could also query. That really would be a clear new world.

disclosure: IBM is a client. SAP is a client of Greenmonk services and will very likely shortly jump on the RedMonk train again in short order.