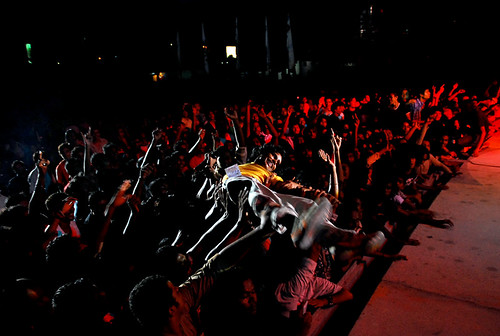 A while ago I put forward Asymmetric Follow as a name to describe one of the key phenomena driving Twitter adoption – the asymmetrical nature of the model, which suits the kind of scale-free networks we see on the internet, and the architectural pattern of publish and subscribe. The idea evidently has legs. When even a cynic like Dare Obasanjo uses the terminology, rather than leaving your guts in a puddle on the floor, you’re probably onto something.

But since I wrote the piece something has been bothering me-namely that the real power comes from Asymmetric Reply rather than Follow. If the root node never replies, then the phenomenon is far less interesting. Its fairly easy for me to track people that reach out to me with direct messages or @replies on twitter- after all, I only have five thousand followers. But what if I was @wossy (150k) or @stephenfry (301k) or Scobleizer (72k)?

The A in A-list probably stands for “administration”. Everyone wants a piece of you. Ping. Ping. Ping. I still believe that the whales can reply in order to build a rich conversational community. But its hard.

Scobleizer, for example, pushes as much traffic to FriendFeed as possible, because he strongly appreciates the filtering mechanisms there. Stephen Fry puts forward a tortuous lottery scheme for the chance to be included in his twitter stream.

ADD remains one way to keep abreast of stuff (that’s my strategy!). Lots of self-searching etc.

Well last week I had a chance to walk in the fan’s shoes, and of course I learned a lot, while trying to build buzz for our charitable efforts for Red Nose Day. I have to admit I hated it. I *really* wanted to get the attention of @wossy or @stephenfry. Could I? Of course not. These guys have day jobs…

But it was only on spending a lot of time surfing around user profiles to check for spambots that I discovered how profoundly depressing the celebrities on Twitter phenomenon can be. It was coming across profiles of Twitter users following ten or so celebrities on Twitter (and nobody else), wondering why their questions weren’t being answered. Why are they ignoring me, I keep asking them questions? After I saw a few of these profiles I felt a little depressed.

Just as we can’t expect celebrities to understand all the tools they can use with Twitter to build relationships with fans, so as Twitter hits the mainstream, and millions more users join the network they aren’t going to know the “tricks” of Twitter relationship building. Lets face it I know these tricks pretty well, and I couldn’t get attention when i needed it, even for a BBC charidee event.

It was sad to see people defining themselves by their disappointments. I can only hope that as more people use twitter they can discover that the real beauty of Twitter is that “ordinary” people are awesome, interesting and entertaining. (As if twitter could teach this lesson!). I follow around 700 folks, and the celebs would be the first to go if I had to cull my list.

The celebrity bit of twitter is a fairly pointless sideshow within the grand scheme of things. That there are people who spend all day trying to get an answer from Jonathan Ross or Stephen Fry says more about them than it does about twitter. It’s the same people who hang round outside film premiers. And they don’t reflect badly on cinema as an art form.

It’s an entirely permissions-based system. So if you want to get a comment out of Dave Gorman or Will Carling or Demi Moore, you’ll have to engage them the way you would anyone else. Celeb obsessives notwithstanding, Twitter is a great leveler.