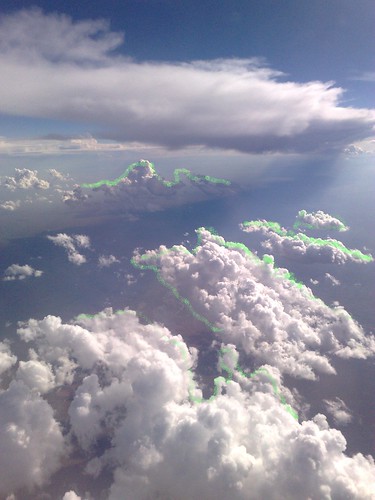 Great question from Tom over on the Greenmonk blog.

Not sure he correlated the question with this slightly bizarre incident he also wrote up, in which Google rebuts a claim about how energy intensive it is. Plausible denial against academic research that hasn’t even been peer-reviewed? Weird, or perhaps just a sign of things to come? Cloud providers are going to make Green claims. I can easily see Google and Amazon competing on that basis.

Of course one issue with the cloud in this context is transparency and auditability? How are we going to evaluate one claim against another? Evaluation is going to become even more important as Carbon trading and Carbon Added Tax kicks in. You don’t expect to see CAT? Even Exxon-Mobil’s CEO is calling for carbon taxes.

Seems like Nick Carr is in the mix too, as ever. That dude is true grit, always making pearls (to case before swine). Nick, like any good researcher, follows the money:

In addition to being a researcher, Wissner-Gross is an entrepreneur who has a start-up that sells a service for tracking the electricity consumption of web sites. So he has a commercial as well as an academic interest here. So far as I can tell, he hasn’t made public his calculations. If he’s going to throw his conclusions around, he should show us how he arrived at them.

But Nick is also prepared to buy into the basic position.

Google has been very aggressive in developing energy-saving computer technologies (much more so than traditional PC and server manufacturers) – and its efforts should be applauded. Cutting energy consumption is a business imperative for the company (because its electric bill is one of its biggest costs), and I think it’s fair to say that the Googlers see it as a moral imperative, too. But that doesn’t change the fact that its search engine and other Internet services, like those of other online companies, consume an enormous quantity of electricity.

Our very own Stephen O’Grady though calls him out thus:

“i don’t disagree with the basic premise – that Google and its friends are massive consumers of electricity, or that we need to think about all of our consumption. but i think Carr is neglecting to discuss the implications of non-digital distribution on the environment because it might complicate his argument.”

Point, counterpoint. It seems to that we’re facing an economy of scale problem here- and frankly if Goog and M$ didn’t know energy was an issue they wouldn’t be building on rivers, and investing in wind farms. It is very good though to see Nick agitating about Energy – me and Tom both think that’s in many respects the more interesting Big Switch (replacing aging energy infrastructure with smart grids and renewables).

Every time I think about carbon trading a little lightbulb goes off in my head. Enron, which kicked off the recent age of SOX, was of course an energy-trading company… and that’s Cloud Computing companies are likely to become. Energy, Compliance, Cloud- not too many interlinked problems to solve then…