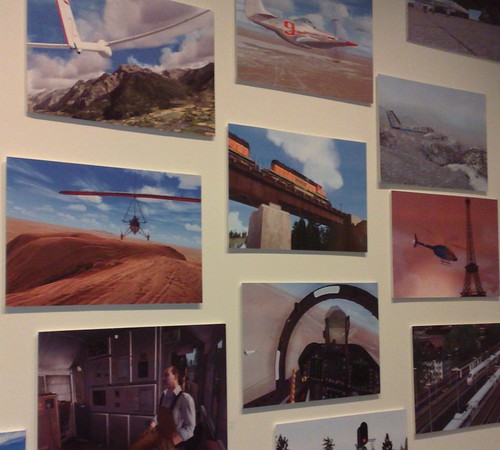 Last Monday I gave a presentation about Sustainable IT at the Big Microsoft Virtualisation kick off in Bellevue, Washington. Tuesday that week my day was relatively free so my time was a jump ball – who in the Microsoft Analyst Relations team would grab it? Two business units stepped in; developer tools and a group within Microsoft’s game division. ACES Studio is the creator of Flight Simulator, a software product even hardened Microsoft haterz love.

I was intrigued but I must admit I was also worried that meeting Shawn Firminger, manager for ACES, was going to be a bit of a waste of his, and my, time. After all, I’m an infrastructure analyst and troublemaker, not a games guy. On the way over Sarah Tatone, the analyst relations rep from Waggener Edstrom, told me not to worry because the ACES division, with its new ESP platform, is about more than games-indeed it already has aviation companies such as Lockheed as customers. Industrial applications of Flight Sim don’t exactly sound like a developer-led or grassroots story, now do they? I needn’t have worried. Not only was what I was to discover probably the single coolest initiative I have seen from Microsoft in the 13 years I have been watching the firm on a professional basis– but it’s also very relevant to RedMonk for a number of reasons.

Battle Plans and Maintenance Fees
The agenda was to learn about ESP. What’s that? Microsoft describes it so:
“Microsoft ESP is a visual simulation platform that enables organizations to create, deliver, and realize the enormous benefits of immersive simulations while gaining a strong return on investment that’s not readily available from other simulation tools today. Simulations built on Microsoft ESP engage users in immersive experiences with very realistic land, sea and air environments.”
The key phrase there is land, sea and air. Flight Sim after all is very cool but almost too realistic – not everybody wants to actually fly a plane. But next up will be Train-SIM (of course not everyone is train spotter either, but run with my here…), then automobile and underwater. Microsoft basically wants to model the entire world as accurately as possible, embedding “real” physics into the system. The ambition is stunning-and so is the work. Microsoft is not only looking to establish a simulation of everything, but then to integrate it, with, for example, Virtual Earth. The model will grow over time and become more realistic. Currently, for example, if you’re using Train-SIM, traveling through a particular geography, the foliage is going to be typical rather than actual- going forward though why not model every major tree on a route? Clearly doing so would require participation from world and dog, but that’s not impossible with the internet as a model. We know user generated content is capable of amazing things.

But once you know what the world actually looks like and behaves, you can begin to model changes to the system. What if we deforested this area? What if we removed all the natural predators from a particular marine ecology? What if we banned all car traffic from a city? What might the alternatives look like?

Microsoft’s initial customers are likely to ask more prosaic questions. Firminger had some truly scary statistics about the costs of keeping aircraft in flight for military training purposes. Anyone for $7k an hour for maintenance, per plane? The big difference now with Flight-SIM- it has evolved from game into a certified platform, which creates all kinds of new revenue opportunities for Microsoft, which will drive further evolution of the platform. The US military already makes extensive use of gaming technology, which could be leveraged in planning for actual battles. Import the street and then run scenarios: If we attack insurgents on this street in Falluja what will be lines of site where we should position our own snipers and take out theirs? At the risk of getting carried away, could we have modeled the surge? Could technology like this have helped the military make the case for more feet on the ground during the initial attack on Iraq? War Games can embed significant truths.

My hope though is that ESP quickly moves beyond applications for the military-industrial complex and into other spaces. Certainly the PC economics – commodity hardware oh yes, the platform is now being designed for multicore—involved make it likely. If the only people that can get their hands on World-SIM are military departments then Microsoft will have failed. But frankly that’s not going to happen. Flight-SIM remains an incredible way to lose hours of your life. Just wait til you can get your hands on the rest of it.

The rise of Bit Miles and Virtual Terraforming
One area that I believe holds out great promise for this kind of simulation technology is in sustainable and sustainability modeling. Take the pilot training example above; while the highest cost may be for maintenance engineers, but how much fuel is being needlessly burned? Training in the real world is expensive. Moving Atoms has a cost. I have recently started talking about Bit Miles as a Greenmonk narrative, defined as is the carbon cost associated with moving a good or creating a service that could instead have been delivered digitally. Bit Miles offer us a moral imperative to digitize: a simulation of the world is a beautiful opportunity to rethink and potentially dematerialize business processes.

Why not Supply Chain Simulator ™, which would pull together all of your plant information (pulled in from OSI, say), where your people are located (Peoplesoft), and how you move goods and services (SAP) around the world? An organisation could begin to run really deep “What If” scenarios about the energy costs of their businesses with simulations like these. But what would really make these models sing is the fact they’d be visual and immersive. Telling is rarely as effective as Showing. What would a low energy manufacturing business look like? With virtual technology we could maybe work it out. At this point it might seem that I have gone off the deep end, but the ESP team inspires that in you. I didn’t see a single Powerpoint slide during my visit. Rather Shawn likes to open up people’s imaginations. 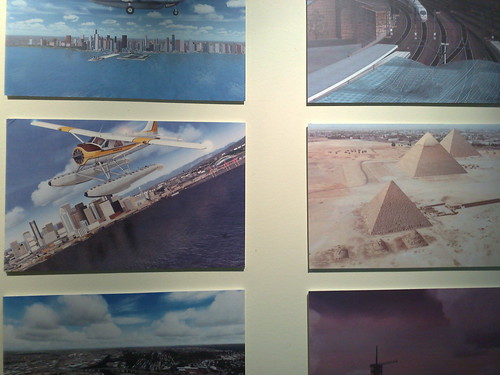 Willows on Leather: a culture of design
Therefore, when you visit the Willows Building where ACES is location, your imagination hits the ground running. One obvious distinction between this and other Microsoft groups is the culture of design. They don’t call them games designers for nothing. I remember thinking that even Matt Jones, design god (see the Dopplr User interface), brutal skeptic and piss-taker extraordinaire might have been impressed. Matt Jones works with Matt Biddulph, Dopplr’s CTO, in a classic developer/designer conversation (I dislike the term workflow for something that is clearly not procedural). From the specific to the general: designer-developer collaboration is perhaps the biggest issue ESP will need to solve as a platform. Who is going to build and extend the platform? What kind of tools will they require?

The ACES team needs to build something that would make Matt and Matt say – aha –”we have to use this for something.”

The ACES design culture doesn’t stop at visual and eye candy though. If you want to see, or should that be hear, some deep modeling, see Microsoft’s sound engineering in Flight-Sim. I was introduced to one of the sound designers, and he let me feel a simulation rather than seeing it. You put a set of noise-canceling headphones on, and through them hear the faint noises of other pilots on the mission. What you feel though is something entirely different: The roar of the engines, coming through a ludicrous set of speakers in the corner, comes right through your stomach. It’s a weird, cool, realistic feeling, and I am pretty sure all hardcore gamers will expect this kind of setup as part of their experience going forward. Clearly for real flight training, noise simulation is invaluable for verisimilitude.

Then Shawn kicked it up a notch- “show him the cone stuff”. It was time for basic physics 101 – stand behind an aircraft and you hear something very different than if you stand to one side. All of this difference is captured within the Microsoft modeling, which I must admit I thought was absurdly cool.

The sound architecture stuff may be old hat- it’s probably as common as Wii numchucks in that community. I’ll be getting an email from Jones saying: “well done granddad”… But it does seem to me that including sound as a modeling dimension could be a boon for building design, for example.

Cutting back on the Cool Aid
It’s important not to get too carried away when you’ve seen some impressive demos. The reality of delivery can be very different, especially at Microsoft. I was there when Microsoft “delivered the bits” for Longhorn (later Vista) in 2003. So I have to be skeptical.

The ESP team is beginning to bring in functionality from other Microsoft games- a human figure renderer here, a line of sight function there. That’s cool, but the more Microsoft platforms ACES needs to integrate with the greater the likelihood of failure. To be fair to Microsoft it seems to better understand the dangers of integrated aggravation these days. It got it right with the x-Box, although the Zune went too far in trying to be different (just what my Windows machine needs for a music device- a whole new music player!).

What about other players and approaches? IBM believes SecondLife can begin to play a training and simulation role for its customers, and make for improved virtual learning. It’s hard to believe Adobe won’t make a play for the world of 3d modeling and simulation beyond its current capabilities in building models, and its clearly far more experienced at building tools designers like to use. Frankly Microsoft ESP would do well to integrate with Adobe tools for exactly that reason. Google will surely introduce What If on top of Google Earth, and has repeatedly shown its awesome number crunching and data gathering capabilities. Apple’s Hollywood experience shouldn’t be ignored either. But then none of these are showstoppers-rather they are potential competitors, which is all to the good.

Giz a Job
At the end of the meeting I told the team- though I wasn’t really actually about to ask for a job, this was a Microsoft team I could actually imagine joining. I can’t think of a stronger endorsement. BusinessWeek came away impressed too. If Microsoft gets the tooling right, can establish the right programming languages and standards, makes the world hackable, doesn’t end up in a digital rights management rat-hole, and provides the right tools it could revolutionise a number of industries. Microsoft needs to think about open sourcing some content, in order to sustain a world community to populate its models. ESP needs to become an architecture of participation, and if it is, then we might begin to know the shape of Web 3.0. It looks a lot like the real world, only simulated.