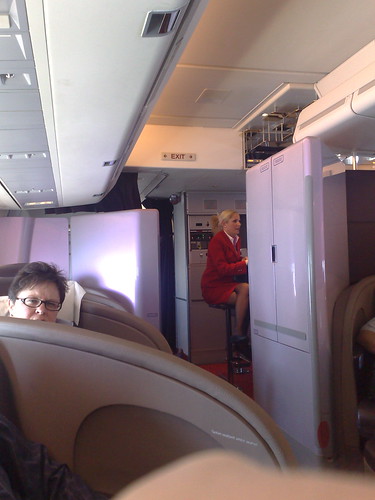 I have decided to leapfrog desktop Linux and move straight to Solaris on my Thinkpad after meeting Chris Armes, senior director Solaris engineering on my flight over to JavaOne. I am only half-kidding. Chris sat next to me on the flight over to SF, and we got talking. He showed me OpenSolaris booting off a USB stick. So my Thinkpad was running Solaris, and the experience was slick. GNOME-based, nicely put together.

Stephen is a long time Compiz guy, but it was cool to see OpenSolaris including things like the 3-d desktop Mr Tecosystems uses. I am hoping it will be new to him on Solaris. Seriously: if i can tell my colleague something he doesn’t know about Solaris I will be in very good shape indeed. Its not every industry analyst that goes to kernel engineering conferences.

One thing that really brought home to me how far Sun has come with a usable desktop environment was the virtualisation stuff Chris showed me on his Thinkpad. Chris described Virtual Box as the best acquisition Sun has done (He is a bit of a fanboy). It brings the kind of virtualisation experience many Mac users are familiar with (Parallels) to OpenSolaris. Run what you want when you want it. For example: I recommended Chris use the Windows Live Writer blogging client on an XP instance he has on the machine.

It was fun to be running Solaris on my laptop in Upper class. I mean- I don’t even run Ubuntu so it was a big deal. Sun has made a lot of progress in a short space of time. Chris credits Jeff Jackson.

So Sun – when are you going to be ready with laptops for me, Stephen and Cote?  Or will you just take over our Lenovo hardware?

In case you’re wondering, the person looking at the camera in the foreground is not Chris.

disclosure: Sun is a client. It paid for me to travel premium economy and I used miles for the upgrade.