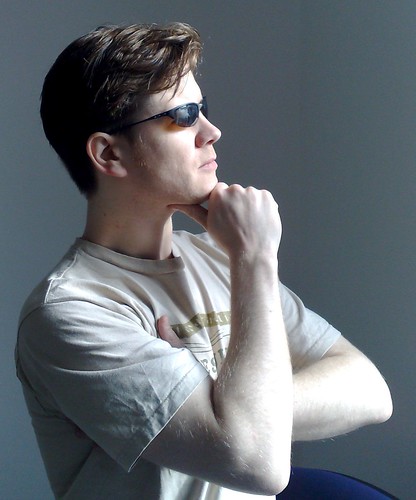 One of the things about being an industry analyst is that its possible to get pulled away from the coalface and lose sight of what’s actually happening on the make-side. Arguably I was never at the coalface. My background before becoming an analyst was as a journalist. There are some that argue you need to have been a CIO to be a solid industry analyst – I hope they are wrong. RedMonk I think has a good range of skills: one ex-SI turned OSS alpha adopter, one software developer turned future media mogul, and one hand-waving ex-hack.

At RedMonk we pride ourselves on being close to the latest trends in developer tool and framework choices, open source and social software tooling. Well I recently started learning a lot more about these things. What started as a joke, is now picking up steam. Stowe Boyd doesn’t point to what you’re doing if it isn’t interesting.

We are building an avatar timeline for people that use the increasingly popular twitter service. Mine looks like this. 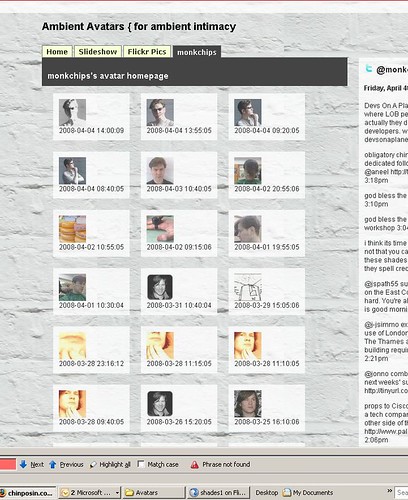 I often tell software companies that if they want to build developer community momentum they should look at the three legged strategy of the 37Signals posse.

There is the platform: Ruby On Rails (“web development that doesn’t hurt”)

There is the place to talk about developer/designer issues: Signal vs Noise

And last but definitely not least there are applications that implement the ideas of the platform and opinions of the people behind it – in this case Highrise, Basecamp and so on.

The three legs all benefit one another- being small things, loosely joined. They enable people to do things, but also support a strong conversation with the marketplace.

In our case we have chinposin the blog, the chinposin application which implements the idea, and the ambientavatar storage platform, which allows people to do something they previously couldn’t.

Am I comparing what we’re doing with 37Signals? Only in that I think those guys are the awesome.

Some people have asked me why we’re doing chinposin. The answers are pretty simple. Because we can, and because I am learning so much about the dynamics of software and community success. Is it Stephen’s job to load MySQL and play with it, or to install any number of packages and tools? Arguably no, arguably yes. But its certainly not wasting time when he goes deep on a new technology or platform. Hopefully I am doing something similar.

Next week I will be at IBM SOA Impact showin Vegas. IBM may even use elements of the platform. But I better go get that wiki up and running. Good times.

If we’re going to be canaries in the coalmine we need to be close to the coalface. tweet.