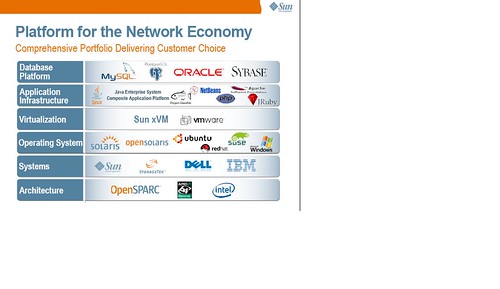 Strange bedfellows is a hallmark theme Jonathan Schwartz’s rein as CEO of Sun Microsystems. I can’t think of a better illustration of his leadership than a slide at Sun Analyst Summit 2008 which names Dell, IBM, Intel, and Microsoft as partners. Meet the new boss, totally different from the old boss.

Jonathan is quiet, understated and concentrates on running the business, rather than running down the competition. He may not have the raw charisma of his predecessor Scott McNealy but in my opinion he is a just as strong, if not a stronger character.  His decision to shell out a billion dollars MySQL also shows he is extremely ballsy – Wall Street is finally coming round to the idea of Sun as a going concern rather than a basket case, and what does Jonathan do? He goes and buys a little company from Sweden that builds an open source database which pretty much no one actually pays for.

Sun’s acquisition meant I was lucky enough to finally meet one of my heroes in the open source business, MySQL CEO Mårten Mickos, this week. Mårten has that Finnish restraint thing going on, a trait that he shares with my business partner Stephen, who Mårten describes as a “Finn in disguise”. One of the main reason Stephen and myself think so highly of Mårten is that we see his business as a model for our own. There are three different kind of customers: those who will never pay for your services, those that one day might, and those that will.

So what is Jonathan up to, buying into a business model that looks somewhat speculative? Think back a few years to the late 90s when Sun was crushing all comers in the server market, and Solaris was seen as the OS for the web, the dot in dotcom. Big, well funded dotcoms and large enterprises with ever increasing IT budgets were buying tons of Sun gear for network infrastructure.

But at the same time something else was happening. Linux was growing like mushrooms. In the dark. Market research firms, CIOs, industry analysts, IT executives had little idea. After all why count what you can’t sell? Free software- that’s just for nerds. Nerds like… two kids from Stanford called Brin and Sergey. Really it was inevitable something as useful as Linux was going to be packaged and turned into a business. The company that did the most effective packaging job? Red Hat. That’s the little company that nearly brought Sun to its knees. For middletier workloads Solaris was overkill. The volume Unix business died as quickly as the Linux business exploded. Sun’s share price tanked, Red Hat’s exploded.

Lighting the LAMP, Capturing the M

So that was the L in the now widely accepted LAMP stack. What of the M? That’s MySQL, and unlike Linux, which is still surprisingly fragmented, MySQL is a single code base developed and run by a single company. That doesn’t make it any less pervasive. RedMonk for example has seven MySQL database production instances, and at this point we’re not paying for any of them. When you also start counting our individual blogs- which run WordPress, which uses MySQL as a data store, the numbers quickly get out of hand. I pay a third party, YellowPark, to run my GreenMonk and GreenForge blogs. The money doesn’t go to MySQL, but the database is definitely part of an economy. WordPress is free software but I pay for service and support in related areas.

Amazon, Google and others make extensive use of the database. Pretty much every Ruby on Rails application ever built runs on MySQL. The aforementioned WordPress, built by Automattic, recently funded to the tune of $30m is at the vanguard of the MySQL built out. As we move from the transactional to the conversational economy MySQL is in a strong position to benefit.

That is not to say MySQL business can’t be transactional. Many telcos are now using the software, and last year the company hit a crucial milestone – it signed a million dollar support deal with one of them. You can rest assured Oracle is not particularly happy to see Sun buy a database company. But then Sun has had to watch as Oracle built its own clustering technology into the base product, commoditising previously high ticket items in its server arsenal. Sun had almost no leverage with Oracle before MySQL. After MySQL the situation is a bit different.

While I would respectfully disagree with Gartner Group that it is time for enterprises to evaluate MySQL as an Oracle or DB2 alternative, its a mark of the platform’s impact that the market research and advisory Giant is so bullish about the acquisition. What Roland said.

But MySQL is valuable because its different from Oracle, not because its the same. Its the modern developer’s favourite bucket of bits. Sun sells storage and servers, and buckets of bits have to run somewhere. Amazon, which offers MySQL hosting, rather than Oracle, may be Sun’s strongest competition in some markets, Funny old game, technology, eh?

You really need to read Stephen’s excellent Q&A for full context about the hows and whys of Sun’s acquisition. And of course Jonathan’s blog on the topic, and Mårten’s: What makes a freedom fighter join a giant? Mårten clearly admires Sun’s bravery – he didn’t have to sell out, and it took bravery himself to decide he would take his 400 employees into the Sun fold:

“in the last few years, they have come back with a vengeance – so much that their current drive and their courage make MySQL look timid and corporate-like.” 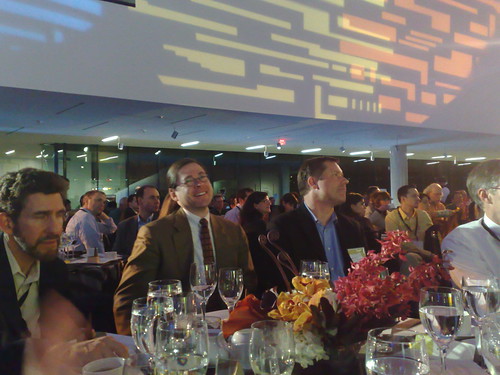 Jonathan takes a long term view – he looks at five year technology waves. His approach to shareholder value doesn’t run in 90 day cycles. One final point to make- I believe Mickos is one of the most talented executives in the industry. Some noses are going to be put out of joint when he is swiftly promoted ahead of long term Sun alumni.  It could be Sun staff that quit, rather than MySQL. But that is all part of the corporate reinvention.

One other thing that strikes me. People keep arguing about whether there will ever be a billion dollar open source company… there already is one. Its called Sun Microsystems.

I came to SAS wondering what the hell had happened to the Microsoft partnership, announced with some fanfare back in 2005, then refreshed in 2007. For Sun to succeed it needs to dramatically crank up the volume of x86 servers that it sells. One way to do that is to ship SQLServer, Exchange and Windows on Sun hardware, without hobbling the offerings with list prices that favor Solaris and provide little or no incentive for Sun sales people and channel partners to shift the tin when it runs other OSes.

The list price insight comes from an Intel employee, who also told me that that the chip giant is disappointed with Sun for not shipping the volumes expected when the two signed a joint engineering and OEM deal. They accused me of pandering to Sun by claiming it is in “pretty good shape”.

This critique, coming from someone at Intel, could hold a little bit of weight, but there are a couple of things to consider.

Firstly- it could just that be the market is choosing AMD rather than Intel in some segments. Another factor to consider is that Dell and IBM are both supporting Solaris on their x86 servers. If customers weren’t choosing Solaris on x86 there is not a chance those firms would be supporting it. Volume comes where you find it, and Dell is the king of volume Intel sales. Intel almost certainly didn’t decide to work with Sun because of promises and targets – it made the decision because AMD was encroaching on turf it saw as its own. So internal whining from the chip giant is kind of funny.

Secondly its obvious to me that to evaluate Sun’s success or lack of it purely in Intel’s terms would be to ignore most of its business. Intel is just one product line of many at Sun, and its coming from a small base.

A Knee in The Curves

Sales of servers based on Sun’s own Niagara chip, based on its Afara acquisition, are spiking nicely, for example. Sun’s Identity Management business is also growing at a clip (the Waveset acquisition also seems to be paying dividends). What is this – successful Sun acquisitions aren’t supposed to happen… except of course the one that first turned Sun from a workstation company into the real deal, arguably one of the best acquisitions ever.

The buzz phrase among Sun execs at the summit this year was “a knee in the curve” – that is, the tipping point where product sales go from ticking along to stronger growth. If Jonathan can get a few of these under his belt he may not need to genuflect to anybody, let alone Intel.

Microsoft and Sun Get it On (at last)

So what about Microsoft and Sun and my concerns. There are many in Sun that still think Sun selling servers that run Microsoft is heresy. Over my dead body and all that. Maybe they should look for a job where religion is more important than survival, because Sun is frankly not the right home for them any more.

In the next few weeks Sun and Microsoft will announce their joint interoperability lab in Redmond has finally opened. The certification and support issues are finally worked out. Sun has a new head of SMB sales for x86 – Christine Beury – and she didn’t even blink when I said her core marketing message should simply be – we’re the best place to run Windows apps. The channel has to get excited about screaming Windows performance, and that’s where joint engineering will come in. Building a channel is hard work, but without a real commitment its totally impossible. Any volume x86 business has Windows as a core component. Sun and Microsoft are finally ready to get in on, and start shipping pre-installed boxes to customers. Can Sun really compete with Dell? From an engineering perspective it undoubtedly can. From a volume perspective not so much. But really all Sun needs is a knee in the curve in this market. It doesn’t need to be the new Dell. Sun has plenty of innovative software products to sell around its boxes and Andy Bechtolsheim’s designs are the kind that make geeks go all goo-goo eyed. It would be pretty funny if Sun’s iPod turned out to be a Windows server. 😉

I don’t really have a lot to add at this point, other than to say that Sun’s new pragmatism is serving the company well. The company has been written off more times than John McCain, but its come back pretty strongly. It may not be a front-runner yet, but its playing a different game by different rules. Sometimes religion just gets in the way of success. At Sun it definitely did.

I expected a magnum opus from Stephen but it looks like I wrote the book this time. 😉 Cote wonders whether shareholders will be prepared to wait for “utopia” (well they have waited this long… )

Oh yeah – here are my thoughts on the show, as interviewed by Ian Murdoch.