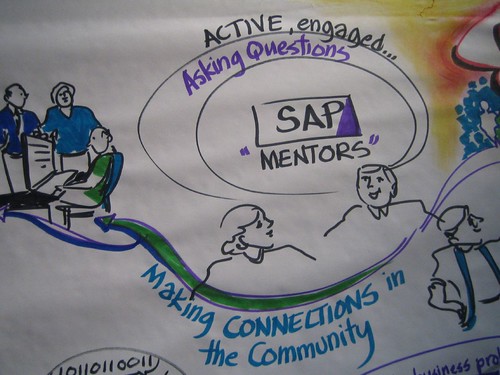 Today I received notification someone called @yojibee is now following my updates on Twitter, the 140 character social networking service. As a general rule I go and check out anyone that is following me. That is not to say I follow everyone that follows me: Twitter is asymmetrical as well as generally asynchronous. But yojibee’s short bio really caught my eye:

into it all, having fun being a busy bee .. mostly consulting — a blend of SAP/social media/marketing

“a blend of SAP/social media/marketing” – the weird thing is just how many people in my network this description fits. SAP and Social media are now synonymous rather than antonymous. I could point to @ccmehil (“Community and Technology Evangelist in the Enterprise World”), Susan (“Continuous, continuous partial attention reckless e2.0 blogger & tale teller”), Nigel, @welshcathy (“SAP Techie and Girl Geek”), Gregor, @mprosceno (“blogger relations and social media evangelist at SAP”), Abesh (“Comfortably Bum!”)

People at other firms such as IBM and Oracle increasingly span social media and enterprisey roles and contacts, but the degree to which this change is occurring in SAP communities is impressive. SAP is not your father or mother’s SAP. Nope- its where a lot of the cool kids work. And play. Community as a powerful change agent.

disclosure: IBM and SAP are clients