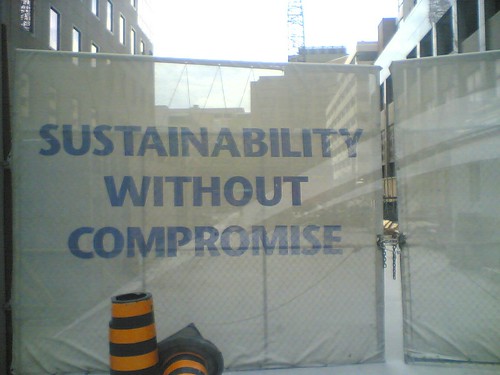 I spent yesterday in Berlin with Transparency International (written up by Dennis here), which crystallized a lot of my recent thinking on a number of issues. The corporate point man for my new understanding is SAP’s James Farrar, who sponsored yesterday’s event.

Like many others I have tended to view corporate social responsibility (CSR) with a great deal of suspicion. Its just puff, PR and flummery. Corporates try and make us think they have responsibilities and interests beyond profits and share price. Greenwashing, and so on. But spending time with the likes of the BT CSR team, I am realising we have a real opportunity here. The web changes everything, and spiking energy prices and global warming mean that CSR is being reassessed. Talking about efficiency is no longer the game. Now the CFO expects the organisation to actually deliver it. Sustainability is not just a buzzword any more, which means CSR is not window dressing any more either.

CSR is becoming a window itself- an important gateway between the business and us: individuals, customers and stakeholders. CSR becomes another breach in the corporate social membrane. But as Hugh MacLeod says “Nothing pokes holes in a membrane better than a blog.” (for blog we could also read Twitter or Facebook).

IF CSR is already a window, or hole in the membrane, social software can accelerate the dialogue and flow of information.

Today over at Greenmonk I talk to a new index from JungleRating, a Dutch consultancy which has researched the online reporting efforts of a number of major European companies – and comes to the conclusion that CSR is moving from static to dynamic. We’re moving beyond brochureware to something far more conversational. Sound like anything we know? Damn straight it does- the Read/Write Web – or dare I say it Web 2.0.

Over here I called out a Google site designed to help the grassroots (that means you) cut their carbon emissions. Or how about me praising Rupert Murdoch’s SkyTV (the UK equivalent) of FOX, for asking customers to vote which charity deserves corporate support.

James from SAP makes a very good case for CSR’s new relevance. His employer is showing leadership in CSR by explicitly linking its community platforms with CSR interests (on this more later). James says:

It is little known but not a secret that SAP has supported the UN World Food Programme over the past few years. Some senior executives have even taken time to visit WFP field missions for a more personal experience. WFP is also a valued SAP customer.

This year SAP has decided to link contributions to WFP with employee engagement in voluntary service to their local communities. I will expand on this relationship in following posts. Our goal is to recognize and promote local action on behalf of the individual whilst as a community we show solidarity for a single cause of fundamental concern.

We need to put the social into CSR. Where we do – that’s CSR 2.0. I am going to be encouraging it, consulting to it, and looking to help create communities to drive substantive sustainability efforts. Greenmonk is now integrating with RedMonk. Hopefully CSR 2.0 will mean big companies similarly integrate their sustainability interests with their corporate strategies. We need to move beyond good intentions.