I am not sure how I ended up seeing the post on Facebook, rather than her blog, but Susan Skrupski gave me a great ‘aha’ moment yesterday, helping me to understand some of the awesome simplicity, and community power of Facebook as a primary interface for blogs and other content. Why would I ever want to use Facebook as the UI for blogs? One simple reason: people as tags, tags as people.

Check out the sidebar: 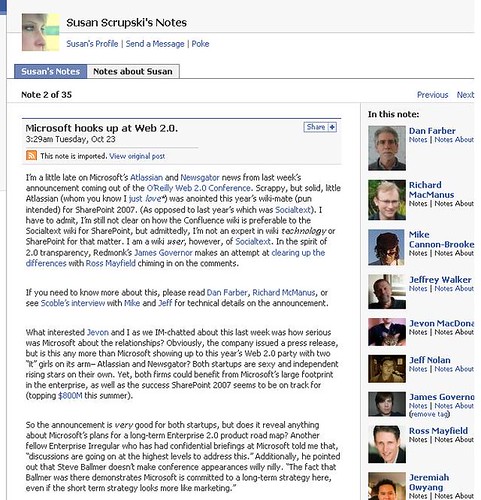 The trackback meets Facebook- would we call these “Facebacks”? Certainly I think its really nice to see the people associated with the story.

Stephen and I have long agreed on that it would be great if blogging systems could autocomplete on the blogs that we regularly point to. Tags moves into the same problem space. Some time ago Stephen said:

The question in my mind is this: is it worthwhile to try and establish some form of centralized identity repository, such that an individual on your local machine becomes not simply another meaningless string of text but a meaningful namespace? Something that other applications – be they blog, IM, email, office productivity, or otherwise could access via a standardized API much as they might access spellcheck? The basic topology might look something like the Evolution Data Server in GNOME, but with more robust capabilities and an API that applications could ask not to check spelling, but to perform a lookup against a library of known identity namespaces.

And in answer to my – not sure how in the first line… it was obviously Facebook that notified me I was in the piece. Thanks for the Faceback Susan. I better return the favour.