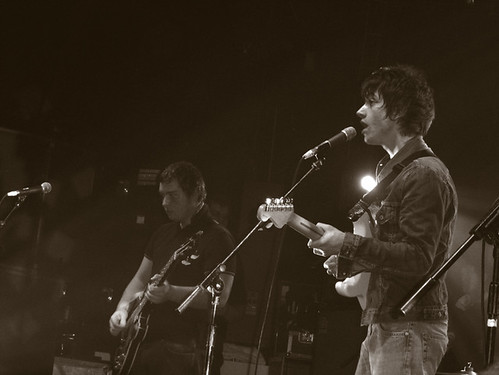 I saw the Arctic Monkeys last night at the Orlando Hard Rock Cafe. Thanks very much Mark for inviting me and paying for the tickets. Anyway the show was awesome, with plenty of classic tunes from the band’s last album and WTFAAM EP, except for one small deal- no encores at all. Just before the band went off this girl in a tiny little Budweiser dress ran on from the side of the stage, and jumped on Alex Turner, and started rolling around on the floor with him. He got up, and then she jumped on him again. That was it. End of gig. We all stood around wondering if there would be an encore. I had been drinking Budweiser all night because that’s all the Hard Rock Cafe had (teh SUCK!). But the image was indelible. Budweiser+Alex Turner = cool. You can’t buy that. I have no idea who the blond is, but Budweiser should send her a cheque. The best part of the show for me was seeing drummer Matt Helders kick ass, driving the band, but also sing great punk harmonies, with a weird stretched neck sideways stance – why was the mic placed there? 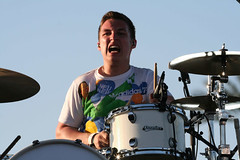 I had not realised the extent to which the real axis of the band is Alex and Matt. Seeing the group changed all that. They rocked. It almost makes me want to drink Budweiser… maybe not.

Thanks to the tripwirenyc for Helders pic.
Thanks to Lola’s Big Adventure for the other pic.

update: oops it was this piece on Budweiser marketing from James Cherkoff that made me post this in the first place.