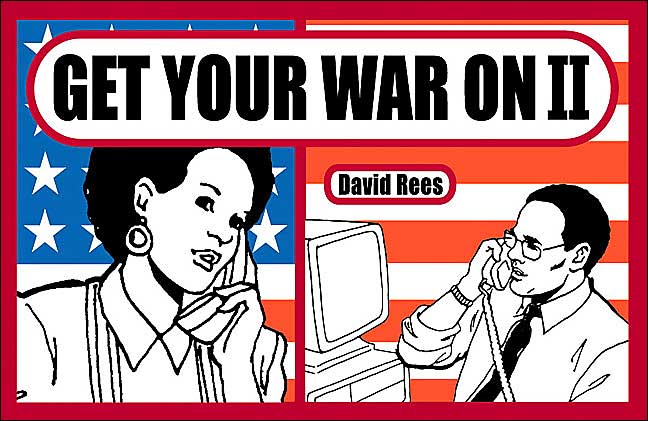 I am a fan of (I seem to be starting a lot of blogs like that lately, what a fanboy) David Rees of Get Your War On and My Filing Technique is Unstoppable fame. I was checking out his site today when I visited the link that says “buy“.

But everything is sold out. Everything. Every last hat, book and t-shirt. [Unless that’s a bug in the commerce code, but that would rather ruin the point of this post, and the book is out of stock at Barnes and Noble too]. I see David as a global microbrand. Hugh allows people to use his stuff for free, which is great, but I bet if he sold t-shirts, mugs and stuff he would make pretty good money (Why see someone else get $52 for a print when you can get $10 for a piece of cotton) . I guess he can make more selling wine, but the Rees sold out theme really stuck me. Never mind the art market – merchandising is where its at. But if that’s the case, I hope David prints some more t-shirts soon.

Its all about the work of art in the age of digital reproduction, pace Walter Benjamin, who said:

“The presence of the original is the prerequisite to the concept of authenticity. Chemical analyses of the patina of a bronze can help to establish this, as does the proof that a given manuscript of the Middle Ages stems from an archive of the fifteenth century. The whole sphere of authenticity is outside technical – and, of course, not only technical – reproducibility. Confronted with its manual reproduction, which was usually branded as a forgery, the original preserved all its authority; not so vis-à-vis technical reproduction. The reason is twofold. First, process reproduction is more independent of the original than manual reproduction. For example, in photography, process reproduction can bring out those aspects of the original that are unattainable to the naked eye yet accessible to the lens, which is adjustable and chooses its angle at will. And photographic reproduction, with the aid of certain processes, such as enlargement or slow motion, can capture images which escape natural vision. Secondly, technical reproduction can put the copy of the original into situations which would be out of reach for the original itself. Above all, it enables the original to meet the beholder halfway, be it in the form of a photograph or a phonograph record. The cathedral leaves its locale to be received in the studio of a lover of art; the choral production, performed in an auditorium or in the open air, resounds in the drawing room.

The situations into which the product of mechanical reproduction can be brought may not touch the actual work of art, yet the quality of its presence is always depreciated. This holds not only for the art work but also, for instance, for a landscape which passes in review before the spectator in a movie. In the case of the art object, a most sensitive nucleus – namely, its authenticity – is interfered with whereas no natural object is vulnerable on that score. The authenticity of a thing is the essence of all that is transmissible from its beginning, ranging from its substantive duration to its testimony to the history which it has experienced. Since the historical testimony rests on the authenticity, the former, too, is jeopardized by reproduction when substantive duration ceases to matter. And what is really jeopardized when the historical testimony is affected is the authority of the object.”

Authenticity of course is something that Hugh and David have in abundance (unless I just confuse swearing with authenticity) which puts them in a wonderful position for doing good work and getting paid for it. The “ritual” may have been removed, but the authenticity remains. I went to gapingvoid and all I got was this lousy t-shirt. Indeed.

As an extra-bonus item, I have something to say about the iPhone. Well, actually about its gesture-based user interfaces. Check out what Paul Valery said back in the 1931:

“Just as water, gas, and electricity are brought into our houses from far off to satisfy our needs in response to a minimal effort, so we shall be supplied with visual or auditory images, which will appear and disappear at a simple movement of the hand, hardly more than a sign.”