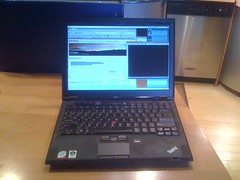 As previously discussed, thanks to the kind attentions of a couple of the folks from Lenovo, I’ve managed to get my hands on one of the new Thinkpad X300’s for a few months of testing. This is what we in the business know as a “score.”

Upon receipt of the hardware, I first ran the stock instance of XP that it had shipped with, but as of a week or so ago I blew that away in favor of a native installation of the latest Ubuntu iteration, Hardy Heron.

To review the hardware, I’ll look at it in two parts. First, because this is what most of you will be interested in, I’ll look at hardware itself and the software experience as it relates to Windows. Tomorrow, for those that are interested, I’ll explore how the X300 handles under Ubuntu.

So, to the review.

The machine is highly polished, and eminently capable of performing at a high level running Windows XP. While untested, the same could likely be said of Vista. If you can find room in your budget for a premium-priced piece of hardware, it’s highly recommended for the Windows user.