What follows is my review of the new 12″ Macbook after a week of use. The fact that I’ve had seven days with the 12″ Macbook is to Apple’s credit. Originally, Apple promised delivery between May 6 and May 13. Instead, I picked the alarmingly small box up at Fedex a week ago yesterday. The tl;dr review is that in the week that I’ve had the machine, it’s been almost exactly what I expected. The machine is a series of trade offs. You don’t get 10 hours of battery life, MagSafe or a high end processor or memory. You do get an ultralight frame, a reasonably large Retina display and a USB-C connector that, its current detractors aside, I consider a virtue. But more on that later.

There are a lot of reviews of the Macbook floating around, and the one thing that most seem to agree on is that the machine is a compromise. What people are debating is: to what degree? Joanna Stern of The Wall Street Journal, for example, is convinced that the machine is too aggressive with its single USB-C port, arguing that

The majority of us still require two or three ports for connecting our hard drives, displays, phones and other devices to our computer.

I’m not convinced that’s true, however. Certainly it’s not for me, as I rarely used the two USB-A ports on my 2011 Macbook Air, and never for a display. From hard drives to printers to phones, I’ve gone wireless.

My reaction instead, then, is closer to David Sparks, who wrote:

The new MacBook isn’t for everybody. Indeed, I’d argue it’s not for most people. There are a lot of compromises involved but in exchange you get a Mac that can go just about anywhere with you. The compromises required for that portability, in my case, are worth it.

Because I have a large workstation to fall back on when I need to do anything computationally difficult, the clock speed in the machine – which is close to my four year old MBA except when it bursts up towards 3 Ghz – the processor’s perceived limitations just aren’t relevant for me. I opted for the 1.3 Ghz model just to future proof myself, but even at 1.1 Ghz that wouldn’t be enough to disqualify the machine from consideration.

As for memory, while I would vastly prefer 16 GB, I’m coming from a machine with 4 GB, so the performance is an improvement for me either way.

The net for me after a week of use is that the performance is fine. Right now I’m running Slack, Tweetbot, VLC, iTerm2, Skitch, Excel, RStudio, the memory pig Chrome (22 open tabs) while writing this in Sublime Text. Zero issues.

In the time that I’ve had the computer, I’ve noticed the performance once. HBO Now stuttered a bit at fullscreen during Game of Thrones. Netflix, for its part, is fine at full resolution, as are Amazon Prime and Plex. Everything else I do on the machine is unremarkable, in that it just works. Large datasets in Excel have been fine, and most importantly MLB.tv works like a champ.

On the plus side, the fact that the processor doesn’t require a fan is big. Particularly because this is what the fan in my MBA used to sound like.

The Macbook’s display is excellent, and a huge improvement over the non-Retina Macbook Airs. The machine ships with a default resolution of 1280×800, but I bumped mine up to the “More Space” setting, which is 1440×900. The additional screen real estate is welcome, but if you wear reading glasses you might want to skip it.

The Retina pixels are nice to have even when doing something as trivial as tabbing between open applications. For HD apps like MLB.tv, it’s legitimately transformative. I’m not so spoiled by the Retina that I can’t go back and use non-Retina displays, but the downgrade is both noticeable and grating. If you’re on the fence about an 11″ Macbook Air versus the 12″ Macbook, I’d go with the latter for the display alone.

To make the Macbook even thinner than the Air, Apple had to sacrifice depth in both the keyboard and trackpad. This means that neither the keyboard nor the trackpad travel as with previous machines, meaning that the Macbook has a different feel to it. Of the two, the trackpad is in my opinion less affected. With the addition of haptic feedback, the Macbook’s trackpad is virtually indistinguishable for me from the Air’s in terms of feel. If I hadn’t been told that the underlying machinery had changed, I never would have known.

Reactions to the keyboard will, I suspect, depend on personal preference. As someone who wasn’t in love with Mac keyboards to begin with, the Macbook’s new design is fine. The difference is noticeable, but hasn’t materially affected my typing. For superfans of the current Mac keyboards, however, expect an adjustment period. Layout-wise, the larger function keys at the top of the keyboard are an improvement, while the arrow design is not.

In his review, Matt Mullenweg compared the Macbook to an iPad, and it’s close. The first generation iPad was 9.56″ × 7.47″ × 0.528″ and weighed 1.5 lbs. The Macbook, meanwhile, is 11.04″ × 7.74″ inches × 0.52″ and weighs 2.03 lbs. In other words, the Macbook is essentially an iPad that’s two inches wider and a half pound heavier. With a larger, higher resolution screen and full keyboard. The form factor practically advertises its intended purpose: portability is the goal here. It also suggests its limitations: power is not.

In terms of build quality, it’s basically what you’d expect from Apple. The only issue I have with the frame is that the sides are a sharp angle, and thus uncomfortable to rest your wrists on for any period of time.

Besides the machine itself, it’s worth noting the weight differences in power supplies. The 29W USB-C brick that the Macbook ships with is slightly smaller than the 45W adapter for the Macbook Air, and noticeably lighter. 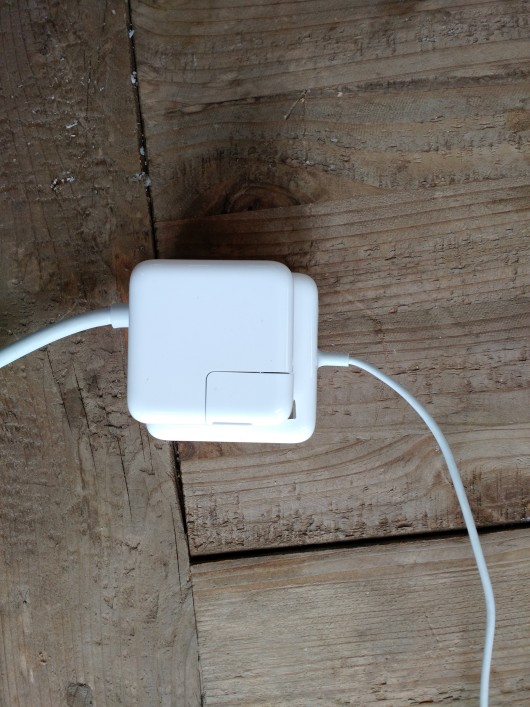 More importantly, it’s now small enough to fit in my gear bag, like so.

Which means that while I used to travel with these: 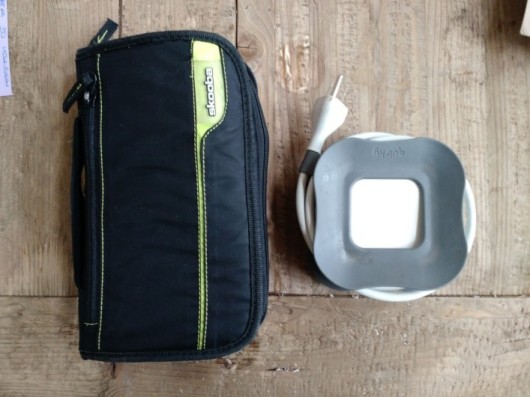 This is all that I need to throw in my travel bag these days: 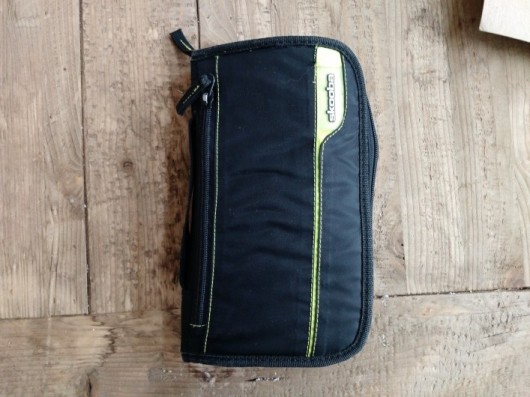 Apple claims that the battery should provide 9 hours of battery life if you’re browsing, and 10 if you’re watching movies on iTunes. Most of the reviews I’ve seen claim real world battery life of around 7 hours; I’m usually shy of that. Maybe I’m working the machine harder, maybe it’s because I opted for the slightly more powerful processor, but short of turning the screen down to an unreadable level it’s not likely that I’ll see anything close to 10 hours of battery life. Complicating matters is the fact that the battery is taking its time with calibration.

Fully charged, the Macbook might tell me I have less than four hours remaining.

Down to 39% capacity, on the other hand, it may project over six.

The poor ability for the machine to predict its own battery life aside, averaging out the other reviews, it seems reasonable to expect seven or so hours off mixed usage. For me, that’s an improvement as my MBA was lucky to hit four with a new battery. If battery life is your absolute priority, however, the Macbook Air is a better bet – with one wild card I’ll address in the next section.

Of all of the features of the new Macbook, USB-C might be the most controversial. Whether critics focus on the fact that it’s not MagSafe or bemoan the lack of current peripherals, USB-C is frequently cited as one reason to not get this machine. As far as I’m concerned, however, USB-C was one of the reasons I bought the Macbook.

Before we get into the advantages of USB-C, it’s necessary to acknowledge two things. First, it is true that, relative to traditional USB, USB-C peripherals are harder to come by. They’re not totally unavailable, as some reviewers have stated, but simple items such as USB sticks are not yet available for USB-C – you have to use a USB-C ==> USB-A dongle. Second, Apple’s decision to include only one port means that users who rely on ports day-to-day for outboard displays, external drives or the like will have to employ secondary hardware such as USB hubs for now. It’s probably also worth mentioning that the USB-C port is most definitely not-MagSafe, but from what I’ve seen of MagSafe 2 I actually consider that a positive.

Anyway, to focus on the above issues is, to me, to miss the bigger picture. The fact that USB-C is a standard connection is tremendously underappreciated by reviewers. First, it means that Apple now has competition for accessories. Don’t want to pay Apple $50 for a USB-C power supply and a startling $29 for a 2m USB-C cable? Not a problem. Google has a USB-C charger with cable for $50, and even if you want to stay with Apple’s power supply Monoprice has 6′ USB-C cables for less than half of what Apple charges.

Expect more and more USB-C accessories to follow, as well, as Apple and Google ship more USB-C hardware and other manufacturers’ models come to market. Whether it’s vendors like Amazon and Monoprice or Kickstarters such as InfiniteUSB, USB-C peripherals are on the way – and you don’t have to pay Apple’s prices for them if you don’t want to.

Also nice about USB-C is the fact that it can be connected to existing USB hardware in ways that proprietary Apple power supplies cannot. As noted by David Sparks in his review, this regular Anker USB external battery pack used for reviving phones or tablets can actually be used to recharge your Macbook (this Mophie cannot, however). If you’re concerned about battery life but already carry this or a similar external battery then, expect to be able to extend the Macbook’s battery life significantly.

Lastly, there’s the possibility that USB-C could become not just a standard, but a universal standard. Android phones will reportedly be incorporating USB-C in future models. After years of carrying around separate connectors and power supplies, the prospect of consolidating down to one charging system for laptop, phone and tablet is very attractive.

The Macbook is a good fit for my particular needs. I’d appreciate a bit more memory and battery life, but I’m not willing to trade weight or the Retina display for them, which makes the machine a better choice for me than an Air. Your mileage may vary, of course. Here is how I would break down the machine for potential buyers.

Disclosure: None. The machine was purchased through normal retail channels at full retail cost.