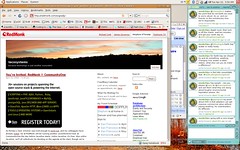 Previously, on tecosystems: part 1 of our intrepid review of the X300, wherein we say nice things about Lenovo’s latest effort. Yes, the same effort that is tempting some to ponder a departure from the Mac attack.

Anyway, for those of you that are new around here, for reasons that are long and complicated and not worth going into now, Linux is my preferred desktop operating system. Which is another way of saying that once the X300 got here, it was just a matter of time until I replaced Windows with Linux. Where ‘time’ equates to less than two weeks.

So, by popular request, the rundown on running Linux on the X300.

Having been an Ubuntu person for some years now, I chose Hardy Heron to run on the X300. According to Miguel, who’s in a position to know, OpenSuSE is also well equipped to run on the platform. Pick whatever seems appropriate.

What Works Out of the Box

Just about everything. The installation of Hardy Heron proceeded without a hitch – even the freaky new SSD, and post-installation I booted into a desktop in which everything more or less worked out of the box. The screen, as you can see for yourself, is gorgeous and spacious enough to accommodate a Firefox session and Twhirl with room to spare (that’s Google Reader in Prism in the background). The onboard Intel X3100 graphics chip handles 3D effects with ease, even with the “Extra” visual effects switch toggled.

What Works With Some Tweaking

Out of the box, suspend did not work for me which is a major issue given my laptop usage patterns. Primary symptom was an initial suspend followed by an immediate resume. Fortunately the fine folks over at Thinkwiki.org had the fix for me. Do this:

And you’re all set. That will remove the ethernet module before suspend, thus allowing the machine to satisfactorily suspend.

One note: use the function keys – Fn-F4 – to suspend the machine. Though the lid open action is detected and will resume the machine, lid close does not appear to be and will not trigger a suspend.

Sound. That’s the bad news. The good news is that I’m about the last man on earth for whom it will not operate. If you follow this ALSA bug, you’ll see several exchanges between users that have successfully gotten sound working and the ALSA maintainers actively working on patches. Patches which are available from the SuSE ftp site here.
I still have no idea why I cannot get sound working on my particular machine – it worked under Windows so is not likely to be a hardware issue – but I’m sure I’ll get it sorted sooner or later. And as mentioned, it’s pretty much working for everyone but me.

What I Haven’t Tested Yet

It’s not likely to be relevant to many of you, but be advised that the RF killswitch – Fn-F5 – kills not just bluetooth as it did on older Thinkpads such as the X40, but wifi as well.