This iteration of the RedMonk Programming Language Rankings is brought to you by Pivotal, the company behind Spring and Cloud Foundry. Join us in San Francisco for SpringOne Platform, a cloud-native event for the professional Java developer. Register here using the promo code S1P_RedMonk100 for $100 off your pass.

With a new and stable process for collecting the base metrics, it’s time to publish our Q3 Programming Language Rankings. As always, these are a continuation of the work originally performed by Drew Conway and John Myles White late in 2010. While the means of collection has changed, the basic process remains the same: we extract language rankings from GitHub and Stack Overflow, and combine them for a ranking that attempts to reflect both code (GitHub) and discussion (Stack Overflow) traction. The idea is not to offer a statistically valid representation of current usage, but rather to correlate language discussion (Stack Overflow) and usage (GitHub) in an effort to extract insights into potential future adoption trends.

With that, here is the third quarter plot for 2017. 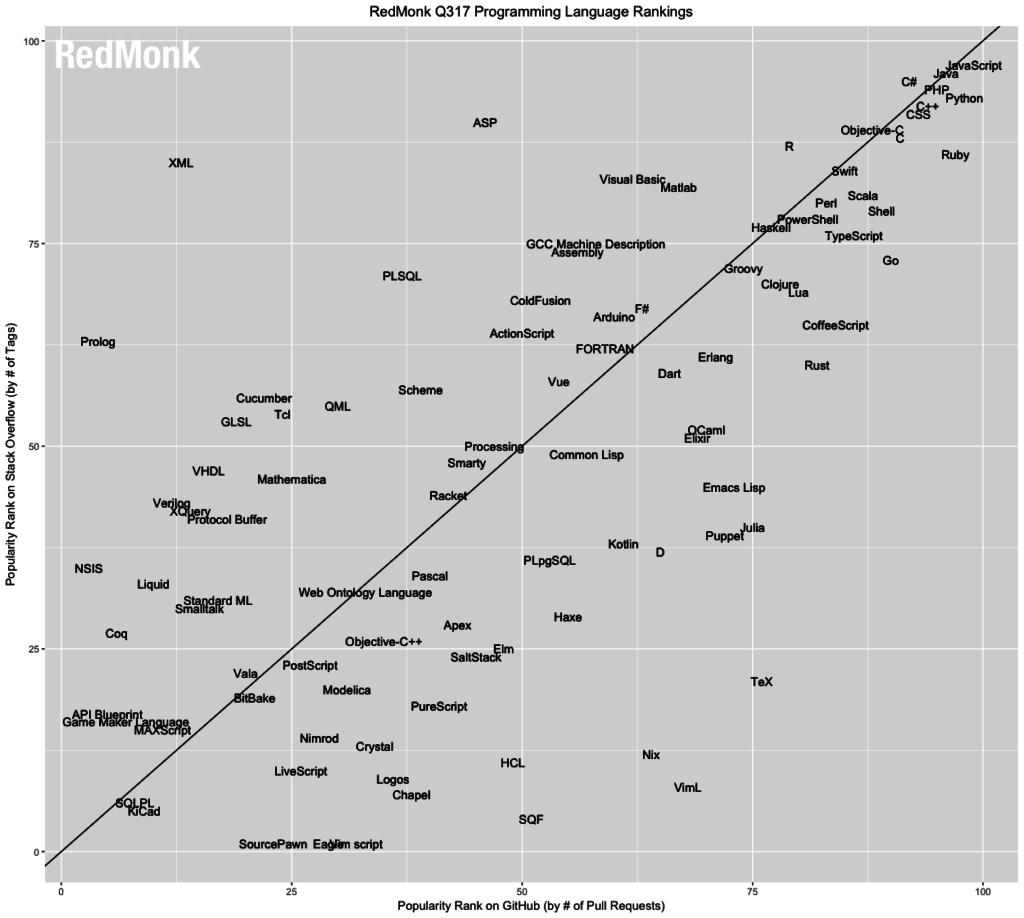 Besides the above plot, which can be difficult to parse even at full size, we offer the following numerical rankings. As will be observed, this run produced several ties which are reflected below (they are listed out here alphabetically rather than consolidated as ties because the latter approach led to misunderstandings). Note that this is actually a list of the Top 22 languages, not Top 20, because of said ties.

Following the update to our process entering 2017, what we most wanted to see in a subsequent run was stability. Because programming language adoption is a lagging indicator typically assessed by counting metrics, wild fluctuations are likely to be false indicators and over-responsive to actual market shifts which tend to be slower. In this, we were rewarded, because this quarter’s rankings show the expected modest amounts of change.

While the overall rates of change were minimal, as expected, this quarter’s run did feature a number of interesting moves both up and down the rankings, which we’ll discuss in a moment. Before then, it’s necessary to observe once again the remarkable staying power of JavaScript and Java atop the rankings. The former has lead the rankings as long as we’ve been doing them, and Java has never been lower than two. Rounding out the Top 5 are Python, PHP and C# which have at times traded places but are all languages with massive volume behind them. None of these languages moved in this ranking, but one tied for fifth did slip.