Update: These rankings have been updated. The next iteration is available here.

As we settle into a roughly bi-annual schedule for our programming language rankings, it is now time for the second drop of the year. This being the second run since GitHub retired its own rankings forcing us to replicate them by querying the GitHub archive, we are continuing to monitor the rankings for material differences between current and past rankings. While we’ve had slightly more movement than is typical, however, by and large the results have remained fairly consistent.

One important trend worth tracking, however, is the correlation between the GitHub and Stack Overflow rankings. This is the second consecutive period in which the relationship between how popular a language is on GitHub versus Stack Overflow has weakened; this run’s .74 is in fact the lowest observed correlation to date. Historically, the number has been closer to .80. With only two datapoints indicating a weakening – and given the fact that at nearly .75, the correlation remains strong – it is premature to speculate as to cause. But it will be interesting to monitor this relationship over time; should GitHub and Stack Overflow continue to drift apart in terms of programming language traction, it would be news. 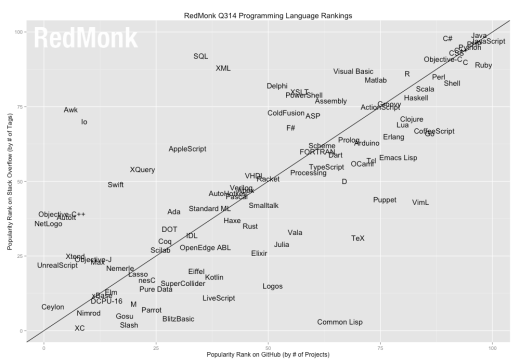 Besides the above plot, which can be difficult to parse even at full size, we offer the following numerical rankings. As will be observed, this run produced several ties which are reflected below.

Most notable for advocates of either Java or JavaScript is the tie atop these rankings. This finding is not surprising in light of the fact that one or the other – most commonly JavaScript – has been atop our rankings as long as we have had them, with the loser invariably finishing in second place. For this run, however, the two languages find themselves in a statistical tie. While the actual placement is, as mentioned above, not particularly significant from an overall share perspective, the continued, sustained popularity of these two runtimes is notable.

Aside from that tie, the rest of the Top 10 is relatively stable. Python retook fourth place from C#, and CSS pushed back C and Objective-C, but these changes notwithstanding the elite performers in this ranking remain elite performers. PHP, as one example, remains rock steady in third behind the Java/JavaScript tandem, and aside from a slight decline from Ruby (5 in 2013, 7 today) little else has changed. Which means that the majority of the interesting activity occurred further down the spectrum. A few notes below on notable movements from selected languages.

Big picture, the takeaway from the rankings is that the language diversity explored most recently by my colleague remains the norm. While the Top 20 continues to be relatively static, we do see longer term trends adding new players (e.g. Go) to this mix. Whatever the resulting mix, however, it will ultimately be a reflection of developers’ desires to use the best tool for the job.