To understand everything that follows, you have to understand that for years we have had one rule at RedMonk. One simple rule. The first rule of RedMonk is that you never, under any circumstances, talk about how old RedMonk is. If RedMonk got old, after all, how old would that make us?

For years then we’ve deflected questions during introductions with vague replies like, “well, we’ve been doing this longer than we care to admit” or similar platitudes.

It is also worth noting that it seemed possible, at least, that if we were to acknowledge the company’s age someone – maybe more than one someone – might feel compelled to say something positive about one or both founders. And while James isn’t particularly comfortable with positive praise himself, I’m allergic to it. I’m a craggy New Englander at heart, and that means praise is for other people. I was taught early on to do my job, and not expect a gold star for doing it. I really don’t like being thanked either, which as you might imagine makes me a joy to deal with overall.

Imagine my surprise, then, to wake up to a few tweets yesterday congratulating RedMonk on our 20th birthday. It was absolutely shocking. Also, horrifying. Who could have known that? Who could have possibly remembered? For a brief, hope filled minute, I thought it was one or two tweets that would be quickly lost amidst the flood of daily twitter nonsense. Then there were a few more. Then I noticed the hashtag, #20YearsOfRedMonk. Suddenly it became apparent that this was no accident. It was a coordinated effort. But the question remained: who could be responsible? Surely it couldn’t be an inside job. Surely our colleagues would never throw over our one, core rule in this fashion.

NARRATOR: it was an inside job.

Our colleagues, as it turned out, had gone full conspiracy. With their warm, kind and ultimately pitiless hearts, they decided that our one, core rule was more of a guideline, really, due to the perceived gravity of the anniversary occasion. I don’t know when they started planning it all, and I don’t know which of them started it, but I know they were all in on it. All of them.

What followed was something I’m guessing even their conspiratorial hearts couldn’t have predicted: an absolutely incredible and unprecedented in our history flood of congratulatory tweets, trips down memory lane and (largely) undue credit laid at our feet for the works and effort of others. It took over my timeline utterly, and judging by several of the tweets I saw go by, I wasn’t the only one to be swamped like this over the course of the day.

There are so many tweets, in fact, that it quickly became apparent that replying to each one would keep me busy into next year. About the best I’m going to be able to do is favorite them all, which seems like a poor repayment indeed for the outpouring we saw but still kept me up late into the night.

In the end, what can I say about all of this? A few things.

When James and I started this company all those a couple of years ago, he was more certain about the outcome than I was. I thought we had a chance to build something new and different, but just that: a chance. If you’d asked me, and I’m sure someone did back in those days, I probably would have said that the odds of us being around in three years let alone five was a coin flip.

But I don’t think either of us would or could have predicted what has happened over the last however many years it’s been. Because communities and people like this just don’t come around all that often. On behalf of myself, then, as well as all of the rest of the team: thank you. From the bottom of our hearts.

Now with all of that said, let’s never speak of any of this again. 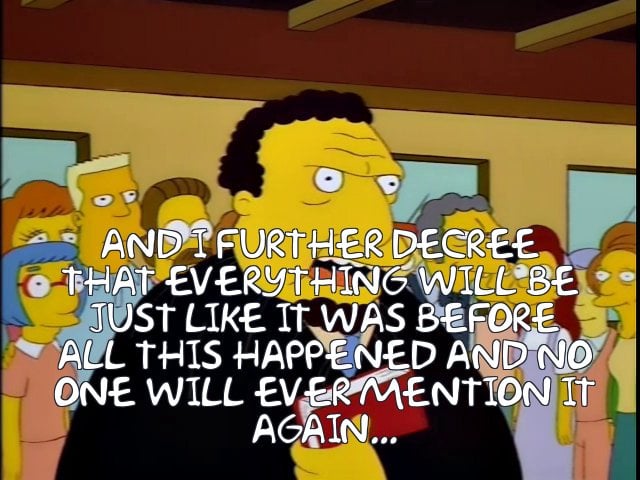 But I have one more thing to add to that.