It’s interesting to ponder whether this is where it all started for Google and Kotlin. As Tim Bray notes, it wouldn’t be the first time that Steve Yegge has moved the needle. Regardless, Google’s decision to anoint the language as a “first class citizen” for the Android platform is interesting news.

For many, if not most, it came with questions. Most obviously, what is Kotlin? Whatever the language’s merits, it has not been hugely visible historically. According to our language rankings, as one example, as of Q1 it ranked 50th. The language immediately ahead of it was Racket, with Mathematica just behind.

The short version is that Kotlin is a JVM-based language originally released in 2011 by the JetBrains (makers of IntelliJ) team from St Petersburg, Russia. Like Scala, an inspiration for the language, Kotlin is intended to improve on the Java foundations both syntactically and otherwise while trading on that platform’s ubiquity.

Like most programming languages, Kotlin is permissively licensed (Apache 2.0). The project is open to outside contributors, and has had some notable ones with Netflix (1 commit), Cornell (79) and Square (3) email addresses listed in the commit logs (James Strachan, of Groovy fame, checks in with 650 commits, interestingly). But as you can see above the overwhelming majority of development is done by JetBrains, though it’s important to observe that the generic @gmail.com addresses which are collectively the second largest contributor can obscure contributors from other organizations who choose to use their personal email addresses rather than their employer issued one. Note also that the graph above conflates @jetbrains.com and @intellij.net addresses, and that localhost rolls up everything obviously local.

With Google’s new commitment, it will be interesting to see if the ratio of internal to external contributors changes over time. For the moment, however, there are several reasons to pay close attention to Kotlin.

What’s next for Kotlin, then? The data available is obviously limited as Google’s news is a week old, but what there is is suggestive.

On GitHub, for example, Kotlin’s base repo was the unsurprising winner amongst trending repositories. Clocking in at number five, meanwhile, was this repo containing a cheat sheet on moving from Java to Kotlin. 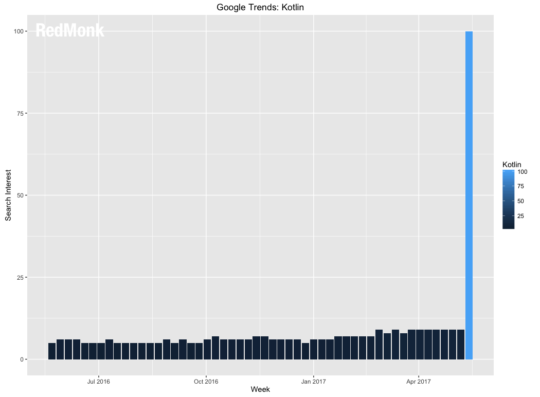 Google Trends, meanwhile, recorded a predictable surge in Kotlin (the programming language, not the island it’s named for) queries. 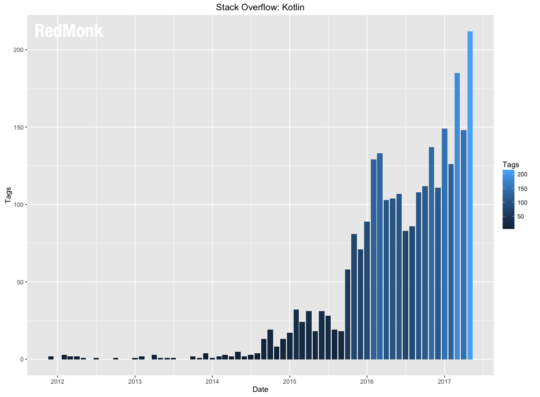 The Stack Overflow data was notable for two reasons. First, because of the spike this month. The bars on that chart are monthly aggregates of tag counts for Kotlin, and May’s count is easily the highest and it’s only halfway through the month. More interesting, however, is the notable uptick in activity late in 2015 and ramping up in 2016. The cause isn’t provable, but is likely the result of early Android experimentation. Whatever the cause, the accelerating traction is certainly reflective of the “low-key buzz” that attracted Yegge and others’ attention.

It’s impossible to say that it’s early days for a six year old programming language, but it’s also inarguable that Google’s decision to support the language on the most popular mobile platform in the world is a game changer. The worst case outlook for Kotlin would seem to be the modern, default choice for development for Android moving forward. Its best case scenario, however, is far more interesting. Advocates of Apple’s Swift – including major Java supporter IBM – have been attempting to expand that language’s horizons outside Apple’s mobile platform and establish it as a credible server-side language for the enterprise based in part on its clean modern design and implementation. In Kotlin, however, enterprises potentially have a language with many of the benefits of Swift but that is compatible with their Java based investments past, present and future. In other words, the boost to Kotlin in mobile could lead to an equally bright outlook on the server.

There’s a long way to go before the language realizes that future, of course, but it’s possible that in seeking a modern path forward for its Android platform Google may have inadvertently created one for traditional enterprise Java users as well.