It’s become common in the technology industry today to say that open source has gone mainstream. Evidence for this assertion abounds. From the multiplying number of projects to accelerating participation from vendors who once were dedicated to protecting their source code, open source is more accepted and more of a default by the day. What the industry doesn’t talk as much about is what open source means.

While we tend to talk about open source as a singular, cohesive category for the sake of convenience, this is obviously an oversimplification. While the fundamental concept of making source code open is common, the rights, responsibilities and privileges conferred thereby are interpreted very differently from community to community.

Copyleft licenses, for example, of which the GPL is the most notable variant, are committed to the freedom of the source code. Code governed by a copyleft license asks for reciprocity from consumers; if changes to the code base are made and distributed (we’ll come back to that word), they must be released and shared under the original terms. Permissive licenses, on the other hand, are built around freedom for the developer: permissively licensed assets impose few if any restrictions on downstream users, and require no such reciprocity. Both communities are strongly committed to freedom; the difference lies in what, precisely, is kept free.

For the better part of the last decade, with better than two thirds of open source projects licensed under the GPL, one might reasonably assume that copyleft was the standard or default, and anything weaker the exception. For years now, however, the dominance of that style of license has been steadily eroding, giving way to licenses at the opposite, permissive end of the spectrum.

Indeed, if we contrast each license’s share of the repositories surveyed by Black Duck this month versus January 2010, the shift is quite apparent. 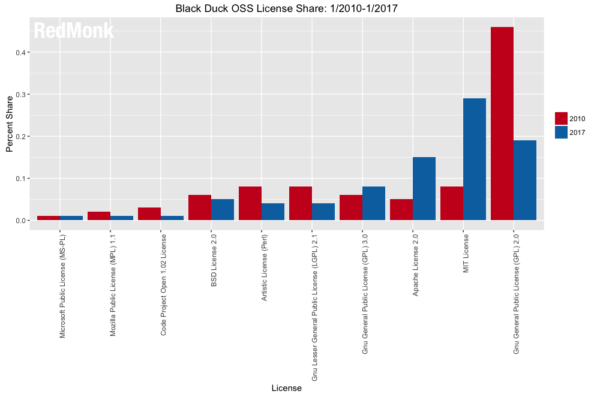 In Black Duck’s sample, the most popular variant of the GPL – version 2 – is less than half as popular as it was (46% to 19%). Over the same span, the permissive MIT has gone from 8% share to 29%, while its permissive cousin the Apache License 2.0 jumped from 5% to 15%. What this means is that over the course of a seven year period, the GPLv2 has gone from being roughly equal in popularity to the next nine licenses combined to 10% out of first place.

All of which suggests that if we generally meant copyleft when we were talking about open source in 2007, we typically mean permissive when we discuss it today. This is not to be dismissive of the importance of copyleft licenses in 2017, any more than acknowledging the reverse a decade ago would have been insulting to permissive license advocates. It’s simply a recognition that, by most observable metrics, we’re now in the permissive licensing era.

If we look closely, however, there is more to be extracted from this chart than verifications of a macro-level shift to permissive licenses.