As long as we have been doing our programming language rankings here at RedMonk, dating back to the original publication by Drew Conway and John Myles White, we have been trying to find the correct timing. Should it be monthly? Quarterly? Annually? While the appetite for up to date numbers is strong, the truth is that historically changes from snapshot to snapshot have been minimal. This is in part the justification for the shift from quarterly to bi-annual rankings. Although we snapshot the data approximately monthly, there is little perceived benefit to cranking out essentially the same numbers month after month. There are more volatile ranking systems that reflect more ephemeral, day-to-day metrics, but how much more or less popular can a programming language realistically become in a month, or even two? The aspect of these rankings that most interests us is the trajectories they may record: which languages are trending up? Which are in decline? Given that and the adoption curve for languages in general, the most reliable approach would seem to be one that measures performance over multi-month periods at a minimum.

This month’s ranking, however, may call that approach into question. From Q113 to Q313, for example, only two languages in our Top 10 experienced any change – Java and JavaScript briefly swapped places. Between Q313 and this Q114 snapshot, however, six spots have new owners. Now it’s important to emphasize, as the caveats below note, that the practical significance of moving from one rank to another is very slight: no one is going to use one language or drop another because it’s fifth rather than sixth, for example. And it is necessary to note that the way these rankings are conducted has changed for the first time since their inception, due to a change on GitHub’s part.

Previously, GitHub’s Explore page ranked their top programming languages – theoretically by repository – and we simply leveraged those rankings in our plot. For reasons that are not clear, this provided ranking has been retired by GitHub and is thus no longer available for our rankings. Instead, this plot attempts to duplicate those rankings by querying the GitHub Archive on Google’s BigQuery. We select and count repository languages, excluding forks, for the Top 100 languages on GitHub. Without knowing precisely how GitHub produced their own rankings, however, we can’t be sure we’re duplicating their methods exactly. And there is some evidence to suggest that the new method is an imperfect replica. Previous iterations have produced correlations between GitHub’s rankings and Stack Overflow’s as high as .82 but never one lower than .78. This quarter’s iteration is the lowest yet at .75. It’s possible, of course, that this is reflective of nothing more than a natural divergence between the two communities. But it’s equally possible that our new method is slightly different, and therefore producing slightly distinct results, than in previous iterations. Until and unless GitHub decides to resume publishing of their own rankings, however, this is the best method available to us. This must be kept in mind when comparing these results against previous iterations.

Besides that notable caveat, there are a few others to reiterate here before we get to the plot and rankings.

With that, here is the first quarter plot for 2014. 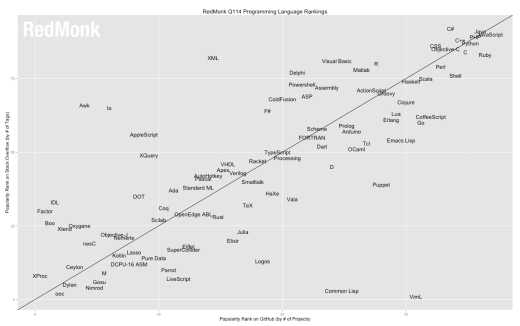 Because the plot doesn’t lend itself well to understanding precisely how languages are performing relative to one another, we also produce the following list of the Top 20 languages by combined ranking. The change in rank from our last snapshot is in parentheses.

A few observations of larger trends:

Big picture, the takeaway from the rankings is that language diversity is the new norm. The Top 20 continues to evidence strong diversity in domain, and even non-general purpose languages like Matlab and R are borderline mainstream from a visibility perspective. Expect this to continue, with specialized tools being heavily leveraged alongside of general purpose alternatives, rather than being eliminated by same.