In February of last year, I purchased a Motorola Xoom Android tablet from Verizon the day they went on sale. Intended to serve as a travel machine for shorter trips – same days to Boston or New York, as an example – it adequately served in that role until November of 2011, when I purchased a MacBook Air 11″. While that machine was intended to replace my dying Thinkpad X301, not my Xoom, in the end it did both.

For a half pound more weight, I could bring along a keyboard. And while I, like Apple, believed that the 10″ form factor was ideal for tablets, the reality was that the Xoom was just big and heavy enough to dissuade casual usage. The Xoom was still great for trips, both because of the built in LTE and the battery life, which was roughly double that of the MBA, but I used it more and more rarely outside of that context. Which was not the end of the world, having been purchased as a travel machine, but certainly not what I had originally envisioned.

When Google announced its Nexus 7 tablet at Google I/O, I was initially underwhelmed. First, because I already had an Android tablet. Second, because the form factor seemed small; little bigger than my Galaxy Nexus, in fact. And last because Android tablets have, in general, underwhelmed. The more I thought about it, however, the more interesting it seemed. A smaller unit would mean even less weight for travel, the pricepoint was very aggressive, and the reviews were good. Excellent, in fact. When I solicited feedback on Twitter, it was immediate and universally positive and I was sold. Last weekend I walked out of the Staples in Brunswick, Maine with their last unit (most venues were already sold out).

A week later, and I’m that much more sold. Here are a few questions and answers on my seven days with a Nexus 7.

Q: First, what are you going to do with your Xoom and the Verizon contract?
A: It’s headed for eBay, and as far as I can tell should – with the free stand Motorola provided as an apology for the delay in the LTE upgrade process – more than offset the purchase price of the Nexus 7 ($249). The LTE contract, meanwhile, will be maintained via the Verizon MiFi Google handed out at Google I/O last year; I extracted the LTE SIM from the Xoom, popped it into the MiFi and my Verizon hotspot lives on.

Q: Which model Nexus did you get?
A: The 16 GB. 8 GB is, to me, too small. Even 16 is a little light, though fine if you stream most of your video and audio. The extra $50 is well worth it here, IMO, because the device does not include expandable storage.

Q: Is the Nexus 7 unboxing as hard as everyone says?
A: The fit was pretty tight, but not that big a deal.

Q: What stands out about the Nexus 7 on unboxing?
A: The build quality is solid, and the unit feels good in your hands. The matte-like covering on the back is perfect; neither slick nor tacky. The speed of the UI, also, is impressive. It’s very responsive.

Q: How’s the activation and setup?
A: For Android users, it’s pretty straightforward. You feed it your account details, and it will begin populating inboxes, browser bookmarks, calendars and so on. It will also list all of your available Android applications, although I was sadly unable to find an option to bulk install multiple applications.

Q: What surprised you about the device?
A: The vertical orientation, although it shouldn’t have, because that was how everyone I saw using one interacted with it. But coming from the Xoom, which was designed to be held horizontally, the vertical orientation of the Nexus 7 was mildly surprising at first.

Q: And how do you feel about the orientation after using it for a week?
A: It’s perfect. Typing, for one, is dramatically improved. It’s a bit like using the keyboard of a very large phone, the result of which is a dramatic increase in both the speed and accuracy of typing on the device. I probably won’t be using it to blog, as has Tim Bray, but there are things I would not consider typing on my phone that I’ll happily compose on the Nexus 7.

Transitioning to a horizontal layout for applications that require it – Evernote, MLB At Bat, and so on – has been a non-issue thus far. The vertical orientation seems perfect for the 7 inch form factor.

Q: How do you use the Nexus 7 differently than you used your Xoom?
A: Mostly, I use it more. It’s just small enough that it will fit in my shorts pocket (though admittedly sagging them to dangerously teenage levels), so if I’m walking over to lunch at the sushi bar, I’ll bring it. It’s replaced my Galaxy Nexus as the device I carry around the house or the property for browsing, Twitter and so on. And once I start traveling again, it will be making every trip, not just the long haul ones the Xoom was relegated to by the end. And it will replace my MBA for the short duration visits, an up and back to NYC, let’s say. In short, I think Tim is correct: the 7″ form factor is the correct one for personal use. My personal use, at least. Portablility might be its most compelling feature.

Q: When you use the device, it’s still primarily about consumption, I assume?
A: Correct. The Nexus 7 is much easier to type on than either my Galaxy Nexus or the Xoom, but it is still no match for a full keyboard. If I’m writing sentences, the Nexus 7 is fine. When I’m writing in paragraphs, I’ll use something with a keyboard.

Q: What are your specific use cases for the device, and how have you organized it?
A: In setting it up, I’ve tried to build three basic screens. The home screen is populated by applications I use regularly (Calendar, Dropbox, Maps, Skype, Untappd, etc) as well as widgets for weather and so on. 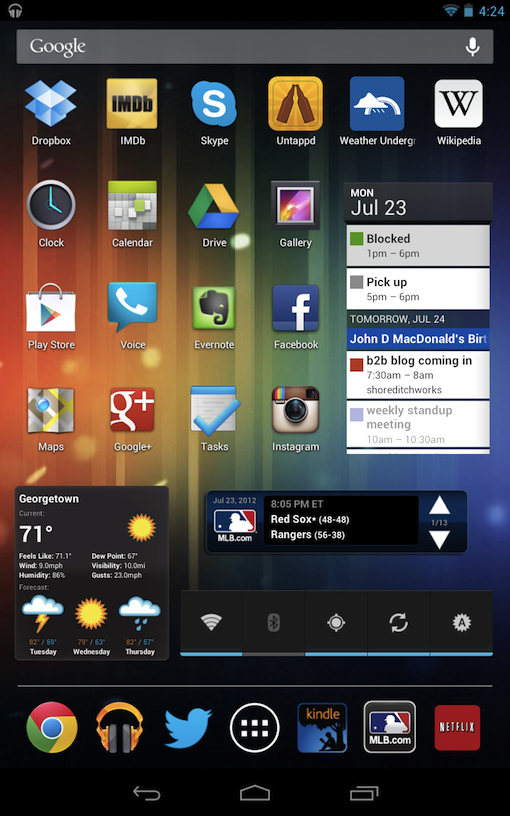 The screen to the left of that is half entertainment (Plex, Roku, Rdio, etc) and half utilities (ConnectBot, GitHub, WordPress, etc). 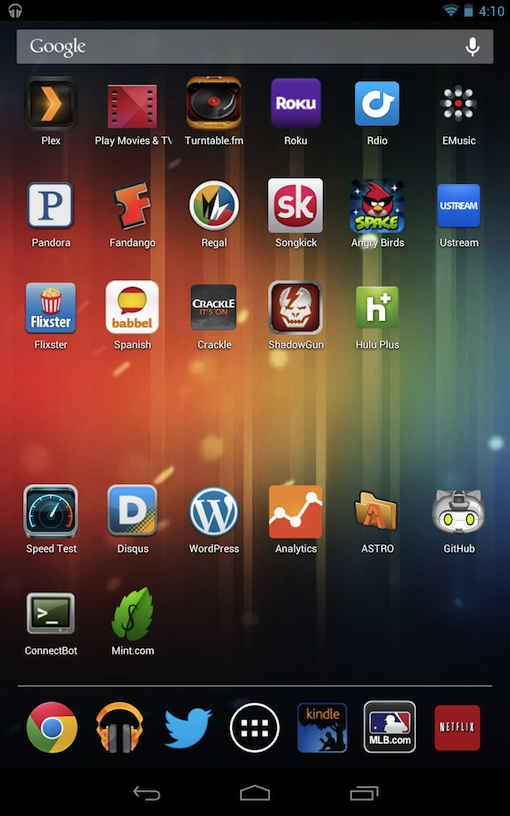 And the screen to the right of home is oriented towards travel. The TripAdvisor widget tells me what’s around, the TripIt widget my schedule details and applications like FlightTrack, GateGuru and Wi-Fi Finder are a boon on the road. 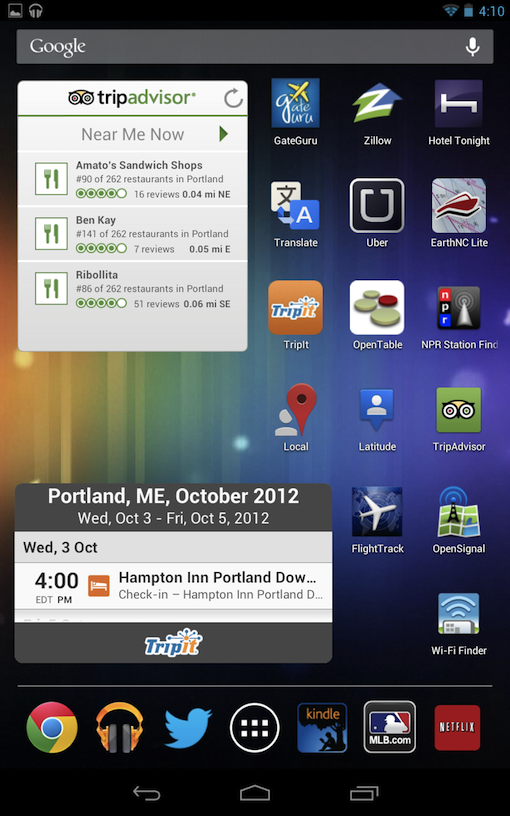 Q: Speaking of applications, how have you found the Android application experience?
A: Mixed, and I know that iPad users I know like Alex King have found this frustrating:

@sogrady The hardware and system are quite nice. The apps really suck compared to what I use on the iPad. Seriously limits the usefulness.

And you can see why. Almost two years after the Galaxy Tab was launched, Twitter has yet to release a tablet specific Android application. The majority of applications similarly take no advantage of the larger screen size; some look just plain weird when blown up on a screen that might be twice the size of a smartphone’s.

In general, this hasn’t been too much of an issue for me. First, because I haven’t been spoiled by beautifully designed custom iPad applications. Second, because the application I care the most about – MLB At Bat – actually does have an Android tablet version. And last, and most important, because I believe this will be transient. Application builders could be forgiven for not building for Android tablets in years past, because none of them sold particularly well. But with the device sold out at retailers all over the country, and applications like Instapaper seeing spikes in demand based on the Nexus 7, more and better Android tablet applications seem likely.

Q: How is the browser? Hasn’t the Android browser been average, historically?
A: The Android browser has been replaced by Chrome on the Nexus 7, and the experience is excellent. I’ve got 37 tabs open on my Nexus 7 at present, with no observable issues.

Q: How’s the battery life?
A: Seems to be as promised. I’ve been getting a day out of mine, under heavy usage. The best battery related feature of the device, however, might be the fact that it charges over USB. Unlike the Xoom, then, which required me to pack a separate charger just for it, the Nexus 7 requires nothing extra as I already carry a USB charging cable for my phone. I can charge the device off my laptop as easily as a wall outlet then, not to mention the USB specific chargers that are showing up at more and more airports these days.

The only caveat to the above is that car chargers apparently don’t put out enough juice; my Nexus 7 won’t charge off the one I carry in my car.

Q: Anything you wish were different?
A: While I’m happy to tether and or use a MiFi with the device, cellular connectivity options would be welcome, as would more storage. And even better battery life, as always.

Q: What are the advantages of the Nexus 7 compared to your other portable devices?
A: The Nexus 7 is about a third the weight of my MBA 11″ with, conservatively, twice the battery life. And it fits in a pocket (if barely). Compared to the Galaxy Nexus, it’s got a bigger, brighter screen which is better for reading, video and application UIs. It’s also nice to have two portable devices rather than one for battery life reasons. By splitting usage between devices, rather than just relying on my phone, both of their batteries last longer during the day.

Q: So would you recommend the Nexus 7 overall?
A: For straight Apple households, probably not. They’ll probably be better off waiting for a smaller iPad, assuming the form factor is a draw. But for everyone else, it’s an excellent device, one that has outstripped my expectations thus far and more than justified the modest purchase price.