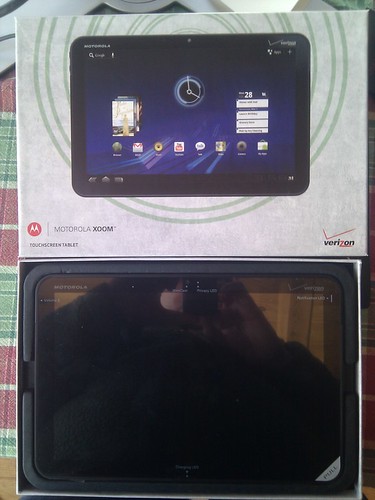 I purchased a Motorola Xoom yesterday morning, about three hours after they became available. I’ve gotten a lot of questions on the subject, so I thought I’d answer a few here in advance of the more detailed GearMonk review coming after I’ve had some more hands on time with the device.

Q: Why a tablet?
A: Truthfully, I never wanted a tablet. Seriously. Nor have comments like Al3x‘s helped.

But here’s the thing: I travel a lot. Way more than I would like to. Just since joining TripIt, I’ve made 131 trips to 40 cities and 5 countries and been gone 296 days. There are people who travel a lot more than I do, I know. Which doesn’t change the fact that I’ve been to 10 cities and 3 countries since January 1.

The fact is that a laptop just isn’t ideal for travel. First, there’s the limited battery life. Yes, even the MacBooks. Second, there’s the weight. Even three or four pounds (with charger) gets old when you’re walking a conference floor all day. Third, there’s the form factor. How many times have you delicately propped an open laptop between the crook of your arm, looking up a meeting room or a session schedule. Or tried to show technology to someone with a machine.

Q: Are you sure you’re going to use a tablet as much as you think? A lot of iPad owners are like Al3x, using them far less than anticipated.
A: No, I’m not sure. Which is why the fourteen day trial period will be important for me.

But the current laptop only travel model for me is frustrating; I’m tired of having to sit near the one power outlet in the room. And assuming that I add the wireless keyboard at some point down the line, the major reason for me not to get a tablet – text entry – would be effectively mitigated.

Q: Why not an iPad?
A: First off, I’ve got nothing against iOS. I was an iPhone user for a few years, in fact. And I’ll further acknowledge that Apple’s operating system is still more polished than Android, Honeycomb notwithstanding.

But until Apple cuts the cord, the iPad will be a difficult proposition for me. I don’t use either Mac or Windows regularly, you see. I have multiple virtual instances of Windows and a Mac Mini (which I absolutely hate) for testing, but nothing I use day to day. Which means that a tablet whose primary updating mechanism is one of those platforms is suboptimal for me.

Add in the fact that after a year plus of Android use as my primary mobile device, that platform is more familiar to me, and the iPad just isn’t a great option for me at present.

Q: What about apps? Isn’t the Android market bereft of tablet specific applications?
A: From what I’ve seen, yes. But really there are only a few applications I consider must have: Dropbox, Twitter, and the most vital, MLB At Bat. All of the above are available to Android tablets, and if they’re not tablet optimized they are at least functional. So app volume, clearly an Apple selling point, isn’t that important to my calculus. Are there applications I’d like to see on Android, like Pennant.cc? Sure. But that’s not how I’d make my decision.

Q: What if the iPad 2 is made of unicorn blood, and one of the features is that it grants you three wishes? Shouldn’t you have at least waited until it’s announced next week?
A: Maybe Apple’s refreshed tablet will have things like a super high res display or fifty hour battery life. Or maybe it won’t. Either way, I’m covered.

I have fourteen days to evaluate the Xoom. If Apple’s next generation tablet is really a device from the future sent back through time, I can return the Motorola less the restocking fee. So the only advantage to waiting was the potential for cost reductions, but that’s not certain.

Q: Speaking of the cost, $799? Really? Isn’t Motorola insane?
A: I completely get why people wouldn’t want to pay $799 for a tablet. Nor would I have paid that: once you’re in the $800 range, you’re closer to low end MacBook Airs than you are the typical mobile device cost. But with the Verizon subsidy knocking the list price down to $599, a tablet was easily cost justifiable.

Q: But now you’re locked into a two year Verizon contract: isn’t that a problem?
A: My situation is perhaps a little different than most folks. I have a long term AT&T WAN line attached to my laptop at a cost of $60/mo. Which sounds high until you remember that that’s about three nights of shitty wifi at a higher end hotel.

With the Xoom, for $50/mo I get 5 GB of 3G (and 4G in a later upgrade) which I can share via the Xoom’s hotspot functionality. The price for bandwidth is absurd – as I’ll discuss in a later post – but not that out-of-line with the market. Sadly. There won’t be any NetFlix Watch Instantly via that connection, but then NetFlix hasn’t launched their Android clients yet anyway.

Replacing my laptop’s AT&T connection with the Xoom’s Verizon then is twice a win: first for replacing AT&T’s oversaturated network with Verizon’s more reliable backbone, second for lowering my monthly bandwidth expenditure by $10.

Q: Why Android?
A: Because it’s the worst mobile platform for me except for all of the others I’ve tried.

With the notable exception of RIM’s PlayBook OS and HP’s webOS, I’ve used the other mobile operating systems pretty extensively. Android’s the best for what I need. It doesn’t compare to iOS in many areas: music and video most obviously, in my usage. WM7 has some aesthetic advantages. But Android’s advantages – Google Apps integration, free tethering, desktop independence, etc – make it the winner for me.

Q: Why the Xoom?
A: First and most importantly, it’s a Google Experience device. Meaning that you get vanilla Android, with none of the vendor’s dubious value add bolted on. It also means that features that the carriers tend to restrict or charge for, like tethering, are available. As long as Google Experience Android devices are available, I will always advantage them.

Q: But aren’t there other Google Experience devices coming to market? Like the Samsung 10.1 tablet?
A: Indeed there are. And I’m told that not only is the Samsung almost half a pound lighter than the Xoom, its screen is brighter to boot. The problem for me is that it’s incompatible with Verizon’s network, and is likely headed to AT&T. I already have an AT&T WAN connection in my Nexus One, so my preference was for a Verizon compatible device.
I think it’s also possible, even likely, that Google will pay slightly closer attention to the Xoom as it’s the flagship launch device. Which can’t hurt.

Hence the Xoom, in spite of its extra heft. Though we’ll see if I’m tempted to revisit that decision after two weeks of carrying it.

Q: Would you recommend users consider a tablet?
A: Having had one for approximately twenty-four hours, I can’t really answer that question. But my suspicion is that it’s a use case question. If your primary work function is content creation – coding, writing, design – a tablet’s not likely to be a first device for you. If, like me, you’re moving to a workstation/travel machine model, a tablet might be a viable complementary device for you.

Hopefully I’ll have a better answer on the subject in two weeks.

Disclosure: There is nothing to disclose here. Motorola is not a RedMonk client, and this device was purchased. We are always open to review units for GearMonk coverage, however.