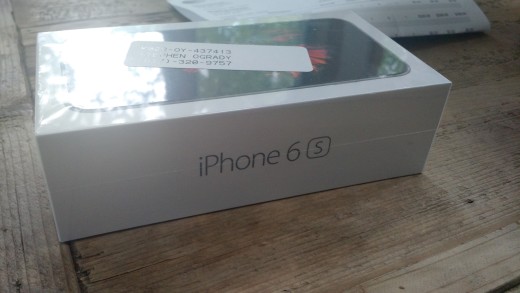 For the first time in almost six years, I’m a regular iPhone user again. As someone who’s used Android as a primary platform for both handsets and tablets for over five years, the obvious question is why switch back? Was it an Android failing? An iPhone feature? Some combination of both?

The answer is none of the above. The reason I switched back to an iPhone is ironic, actually, considering the nature of both the Android and Apple ecosystems. Theoretically, part of the promise of Android is the diversity of choices available. There are dozens of Android manufacturers manufacturing dozens of different devices. The only vendor producing Apple devices, on the other hand, is Apple. And there aren’t that many of them: two form factors for phones, three for tablets. Which would imply that if one of my primary drivers was physical handset size, I’d stand a better chance of getting exactly what I wanted from the Android ecosystem.

Except that’s not what happened.

I’m not a fan of the large phone craze, you see. Drives me crazy, in fact. I do not understand on any level the mass market demand for enormous phones. Part of it is that I have a tablet (Nexus 7 2013), I suppose, but I can’t figure out how people with smaller hands use giant phones. I don’t have enormous, Koufax-ian hands – I can’t quite palm a basketball – but they’re reasonably sized. And most of the phones manufactured today are just too large for me to use comfortably. What about the majority of the population with smaller hands?

My platonic ideal in terms of size was the orginal Moto X. It fit the hand perfectly and the entire screen was easily reachable. Unfortunately, I broke that phone and replaced it with the second generation Moto X. It was, predictably, expanded from the original: around a half of an inch taller and a third of an inch wider. Still usable, but barely.

With the battery on that phone prematurely shot, I began looking for an Android replacement. The problem? They were all even larger. Part of the problem, to be fair, is that I won’t consider most of the Android manufacturers because they modify stock Android in unhelpful ways, are glacially slow to roll out operating system updates, or both. But then again, that’s a problem that Android has created for itself, so my sympathies are limited.

Anyway, the only models I really considered because they a) offered a pure Android experience and b) would provide reasonable updates are manufactured by Motorola or Google itself (Nexus). Which were all too big.

The successor to my already-uncomfortably-big Moto X, the Moto X Style? It’s half an inch larger (again), and a little less than a third of an inch wider. Enormous, in other words. Rumor had it, however, that Google was coming out with not just one Nexus device this fall however, as it typical, but two. One large, and one small. Even better, they’d have fingerprint sensors and use the same USB-C port as my Macbook.

Imagine my disappointment, then, when the small phone turned out to be larger than my current Moto X. Which was, again, too big. The best “small” phone on the market, then, turned out to be the iPhone 6S, which was shorter, narrower and thinner than my Moto X.

So back to an iPhone it was. It’s funny that I had to go back to the platform of limited choice to get the choice I wanted, but until (viable) Android manufacturers offer something other than too large, larger and giant models, I’ll probably be an iPhone user.

For better and for worse.

In the meantime, here are some thoughts on the transition.

As a brief caveat before getting into the specifics of things working less well, let me state up front that I’m following what I’ve referred to as the Manjoo Doctrine: “Buy Apple’s hardware, use Google’s services and get media from Amazon.” To the letter, in this case. There are a variety of reasons for this. I can’t go all in on iTunes, for example, first because I still use Android devices and second because my workstation is Linux. The utility of iMessage, meanwhile, is massively tempting, but its questionable track record with detaching phone numbers from iMessage and the fact that I am by no means wedded to an iPhone for life leaves me disinclined to use it. As for iCloud, well, it’s iCloud. So no thanks.

The net then is that I’m an Apple hardware buyer who a) buys his media (books, music, etc) primarily from Amazon and b) relies heavily on Google services (Gmail, Apps, Music, Maps, Now, etc.) Which means, by definition, that my experience is going to be fractured and higher friction than someone who relies on Apple for everything top to bottom.

That caveat out of the way, these are a few areas of frustration for me at the moment.

@sogrady curious if you used the Android app Apple released to make migration from Android to iOS easier, and if so your impressions of it?

I’d meant to address this in the original review, but I did in fact use Apple’s Move to iOS application as part of my transition from an Android device to the iPhone. The good news is that it mostly worked – the text messages in particular made the transition more or less intact. The bad news is that it didn’t work perfectly and it took a very long time. Contacts, in particular, got mangled: in many cases, I have three or four entries for a single contact that are devoid of any actual contact information. I haven’t yet figured out how to resolve that. And in spite of the fact that I did not ask the application to migrate my photos – both because I knew it would take a long time and because they were all already in Google Photos – the migration took several hours, which seemed a bit excessive given that the information to be transferred over could presumably be measured in megabytes rather than gigabytes.

The net is that Apple’s migration app is probably better than nothing, particularly if you just want to preserve a text history, but expect a lot of remediation work post-migration.