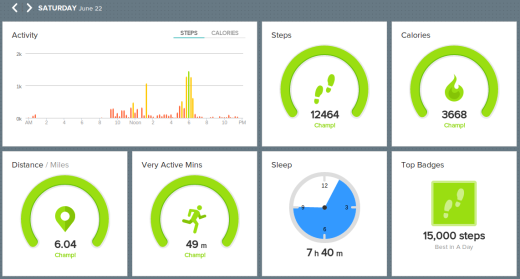 tl;dr: I like the Fitbit Flex and recommend it.

My order for the Fitbit Flex was originally placed in early March, a few days after I’d reviewed the Lifespan treadmill desk I’d gotten for the office. I didn’t get mine until late May, however, the 18th, as Fitbit’s vague “Spring” release for the device almost turned into summer.

It was in part because of the treadmill desk that I originally considered a fitness tracker. I was capturing my time on the machine at work, but there was far more activity lost than otherwise. And given my affection for both spreadsheets and making evidence based decisions, devices like the Flex were not a hard sell.

Before purchasing the Fitbit, I considered both the Jawbone Up and the Nike Fuelband. What tipped me towards the Flex were two factors. First, the fact that Fitbit explicitly designed for scenarios like the treadmill desk – where you are walking, but your hands remained stationary. This is, at least from reviews I read at the time, a problem for the other two devices. Because a significant portion of my activity per day would be on a treadmill desk, this was a critical feature for me.

Second, and nearly as important, was support for the Android platform. Nothing against the iPhone or its users, but I’ve been Android on both phone and tablet for several years now, and I had no intention of switching platforms just for the sake of fitness tracker compatibility. Jawbone has Android support, I believe, but Nike – perhaps not surprisingly as Tim Cook sits on their board – after initially claiming that Android support would arrive last summer, backpedalled and in February committed to an iOS only path. 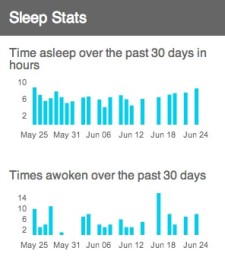 Winner Fitbit Flex, in other words. But not just by default. I’d played with their Android app and their dashboard ahead of the purchase, and found them more than acceptable. Nor has anything in my experience since altered that opinion; I’ve enjoyed the Flex and recommend it. The sleep logging in particular has been intriguing.

The above concerns notwithstanding, I’m comfortable recommending the Flex. It’s been a tremendously useful tool for me in understanding when I’m active, how active I am and if that pattern is beginning to trend in the wrong direction. The only time I take it off a month into this experiment is when I’m doing home improvement work; it just cannot handle the simple act of hammering a nail. It’s not perfect and has some obvious areas for improvement, but it’s more than justified the $99 price tag for my usage. Depending on your needs, and maybe your mobile platform, it might work for yours as well.