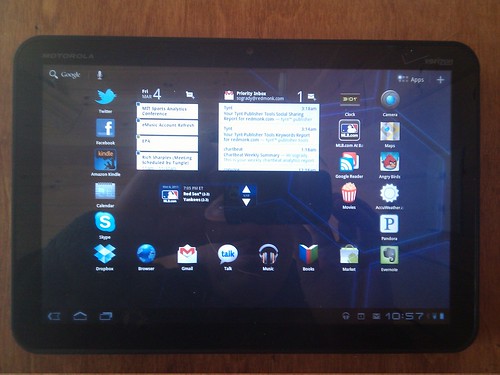 First impressions are fine. But I prefer the seven day take, at least when we’re talking about hardware. A week later, then, here’s my review of the Motorola Xoom. For ease of consumption, I’ve broken it up by category, and further by good/bad. If you just want an executive summary, the gist is at the bottom.

It seems clear that the Xoom, at least, was introduced before it was ready in an attempt to avoid getting buried in the wake of iPad 2 discussion. The limited tablet application volume, the baffling multimedia setup, the non-functional Flash/SDcard/LTE and the general lack of stability of the platform point to a product rushed to market. The question is whether this matters.

For the first wave of users, it may. These issues and others may yield higher than average product return rates, though determining which returns were a consequence of Xoom product issues versus the subsequent iPad 2 product features will be a challenging exercise indeed. But shipping is a feature: I’d rather have the imperfect Xoom today, for example, than hold off for the long awaited HP or RIM tablets.

As for the iPad 2, it is gorgeous, both thinner and lighter than the Xoom. iOS is not only (likely) more stable and (provably) backed by an application market with 4000X more choices available. It is also a device explicitly tied to one of two desktop operating systems that I don’t use. More importantly, it seems reasonable to suspect the reason that Apple chose not to disclose the iPad 2’s available memory at launch time is because it does not compare favorably to the shipping Android alternatives. The latter of which is an issue for me, given my primary use case: browsing.

Your calculus may be – probably is – different than mine. The iPad may be – probably is – a better option for you at present. But that’s not the interesting question to me. What I’ll be watching is how they compare in the future, because most of the things wrong with Xoom right now, well, they’re just software. And software, unlike hardware, can be fixed after the fact.

With the notable exception of issues such as the weight or the proprietary power cable, the majority of my complaints about the Xoom are software related. Michael Gartenberg is right to say that we should not praise Motorola for the Xoom’s lack of Flash, not yet operable SD card functionality and so on. But neither should their pending introduction be fully discounted. If the hardware doesn’t include an SD card slot, I’m not likely to have that functionality during the life of the device. If it’s present on the hardware, however, well, the rest is just software. Like most of the Xoom’s problems at present. For me, anyhow.

It took Android approximately five versions, in my opinion, to be competitive on the handset – FroYo being the first legitimate alternative [coverage]. I expect it to progress much more rapidly on tablets, if for no other reason than the fact that the community is exponentially larger than it was in September 2008 when Android 1.0 launched. As a result, I’m willing to give Honeycomb the benefit of the doubt. Will regular customers extend Android the same courtesy? I doubt it.

The greater concern for the Android ecosystem, however, should be Apple. Honeycomb is a 1.0 release; current performance is not likely to be predictive of future potential. Certainly it was not with handsets. Apple, however, is increasingly using the iPad’s success as an engine to drive and reinforce its dominant market position. Remember that Apple is more than willing to put its capital to work to secure its supply of vital components, the byproduct of which is shortages and thus higher costs for competitors. The more successful the iPad is – and make no mistake, it’s been absurdly successful – the more challenging this becomes.

As a user, of course, none of that is my concern. I just want the best tool for the job, and for me that’s looking like the Xoom, the warts notwithstanding. But ask me again in seven days.