In February, I gave a talk at cfgmgmtcamp on trends in configuration-management communities. I wanted to post the data and provide a bit more context than I did on Slideshare.

My goal was to examine a variety of community metrics across configuration-management frameworks to provide an update on the work that Steve did back in 2013.

For starters, here’s a look at the development communities for the core software. While this ignores third-party modules, it does say a lot about the amount of change to the core codebases: 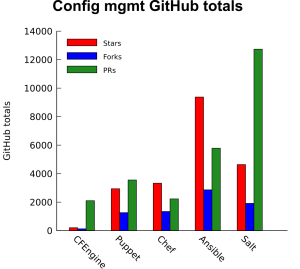 It’s worth noting that in Salt, everything is done via pull requests, even from existing developers, so that number is a bit inflated. However, there’s a pretty clear correlation between age of the framework and activity in the core. CFEngine released 1.0 in 1993 and it’s fairly slow today; Puppet and Chef date to the mid-’00s and they’re in the middle; while Salt and Ansible are just a few years old and remain quite active in the core.

But it’s hard to get a feel for trends without plotting this over time, so I did: 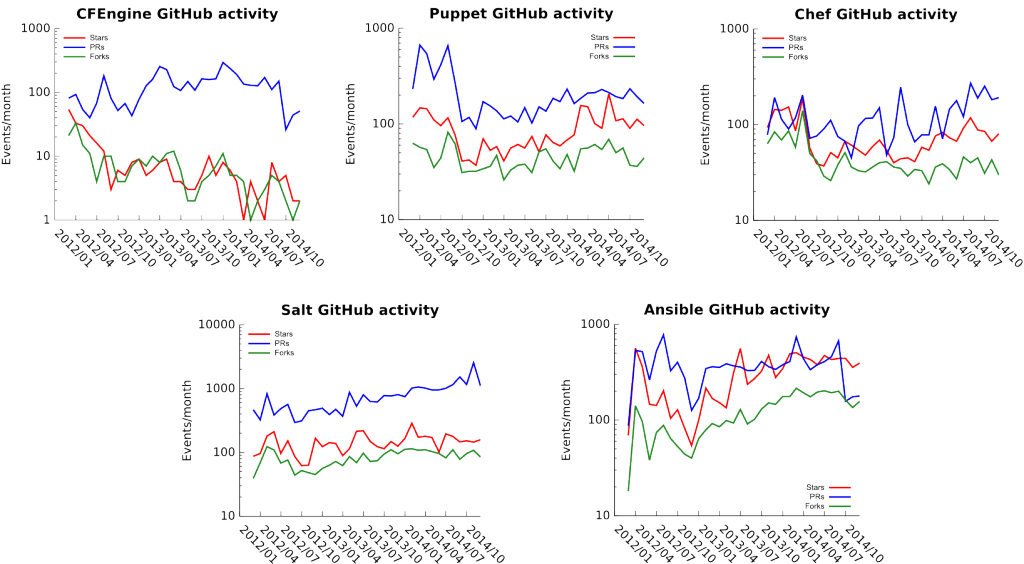 Please note that the scales are different for Salt due in part to the inflated PR numbers. Again the numbers are not terribly surprising, with a shrinking CFEngine community, Puppet and Chef holding relative static, and Salt and Ansible growing at rates. However, Ansible has grown to around ~200 forks a month while Salt grew to around ~100/month. This indicates a significant difference in activity across the two that’s also largely supported by stars and PRs.

However, core development is not necessarily reflective of the entire community, so the next data source I examined was mailing-list activity on the development list: 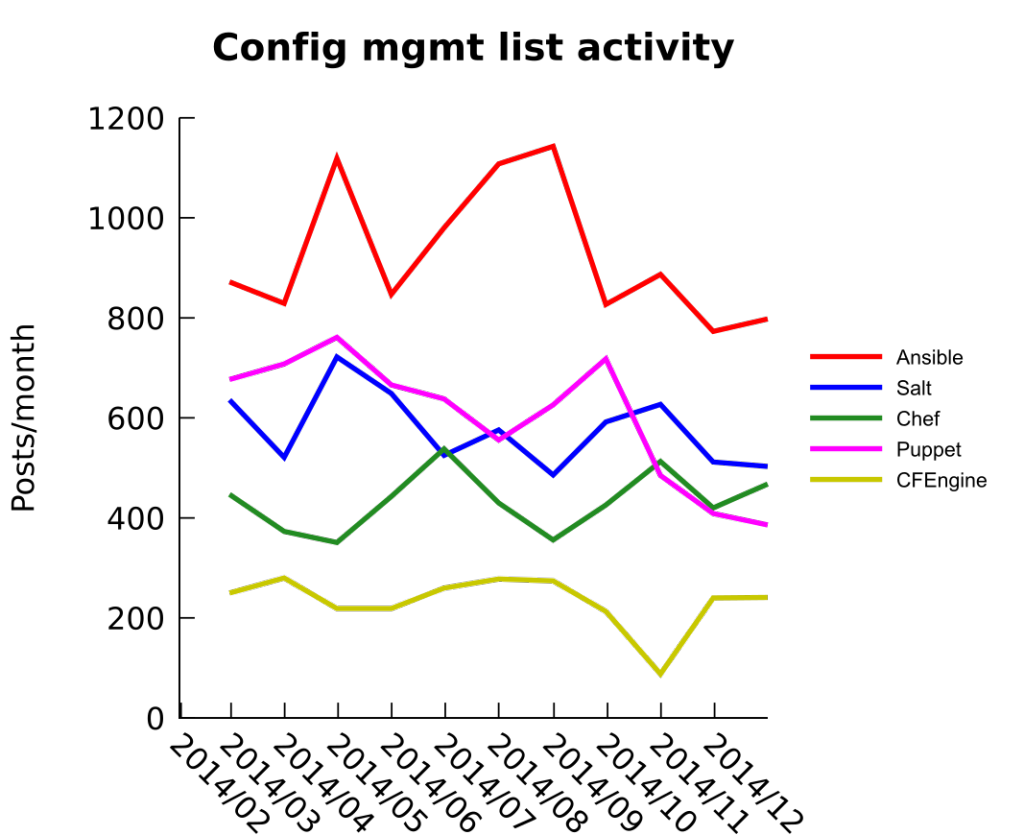 In keeping with the other data, over the course of 2014 CFEngine lagged behind while Ansible charged ahead, with the others largely holding steady in the middle. There is a potential downward trend with Puppet to keep an eye on, although it’s unclear whether that will remain the case given the amount of noise in this data.

The next data source I looked at was the IRC community. This is the first source that’s suggestive of anecdotal sayings that Puppet is for ops and Chef is for developers, as IRC tends to be a more old-school chat tool. It’s otherwise broadly in line with the others: 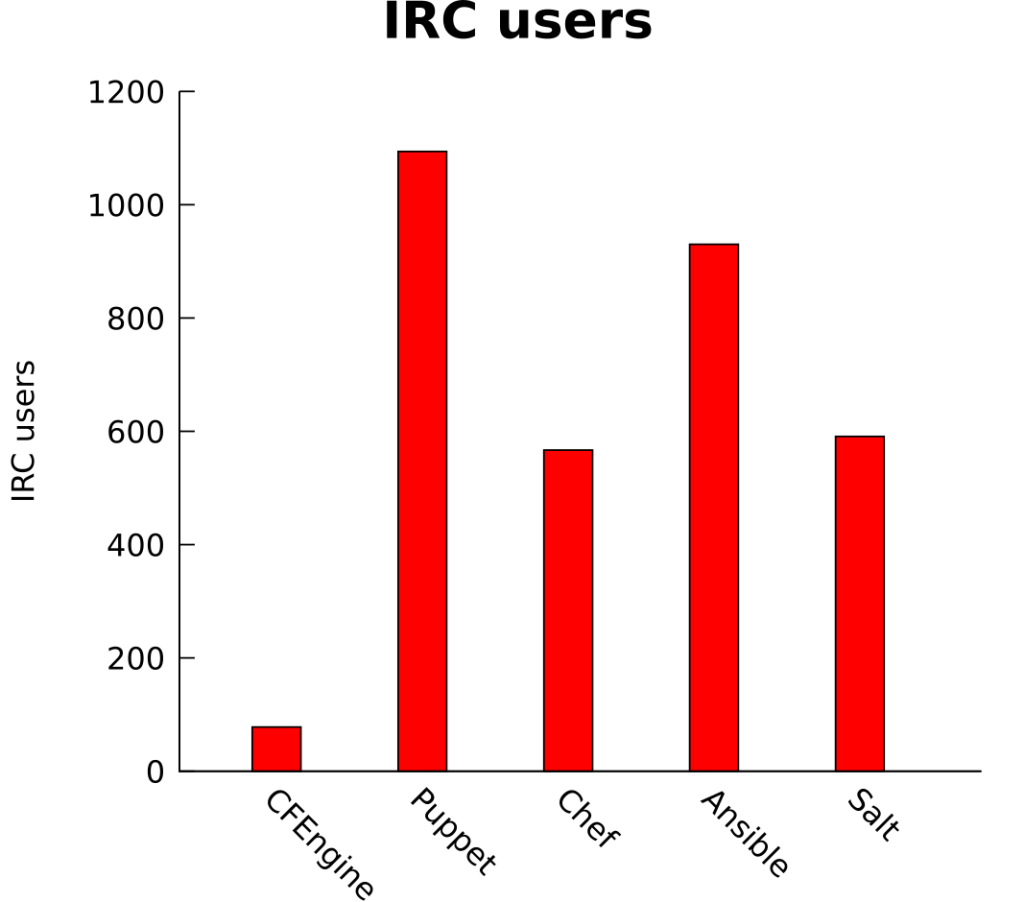 In contrast, for a developer-leaning audience I took a look at Hacker News. This is has potential artifacts for Salt (due to salted password hashing) but that doesn’t appear to be a major issue. While the reason downward trend in many frameworks over the past couple of years is unclear, what’s absolutely clear is the growth in Ansible activity and the relative dearth of CFEngine conversation. In addition, Chef has a slight advantage over Puppet in this developer-heavy audience. 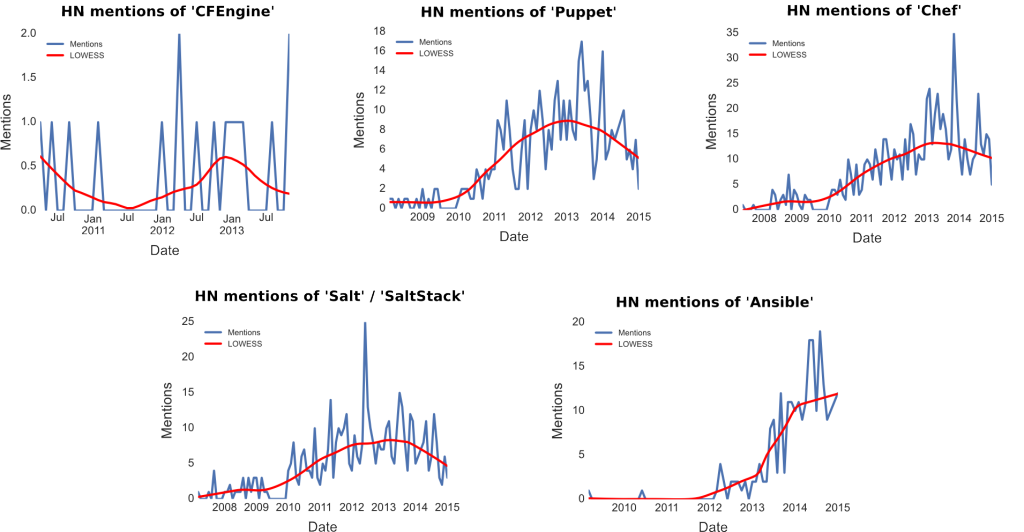 However, it’s worth setting some broader context. Let’s compare all of this to Docker: 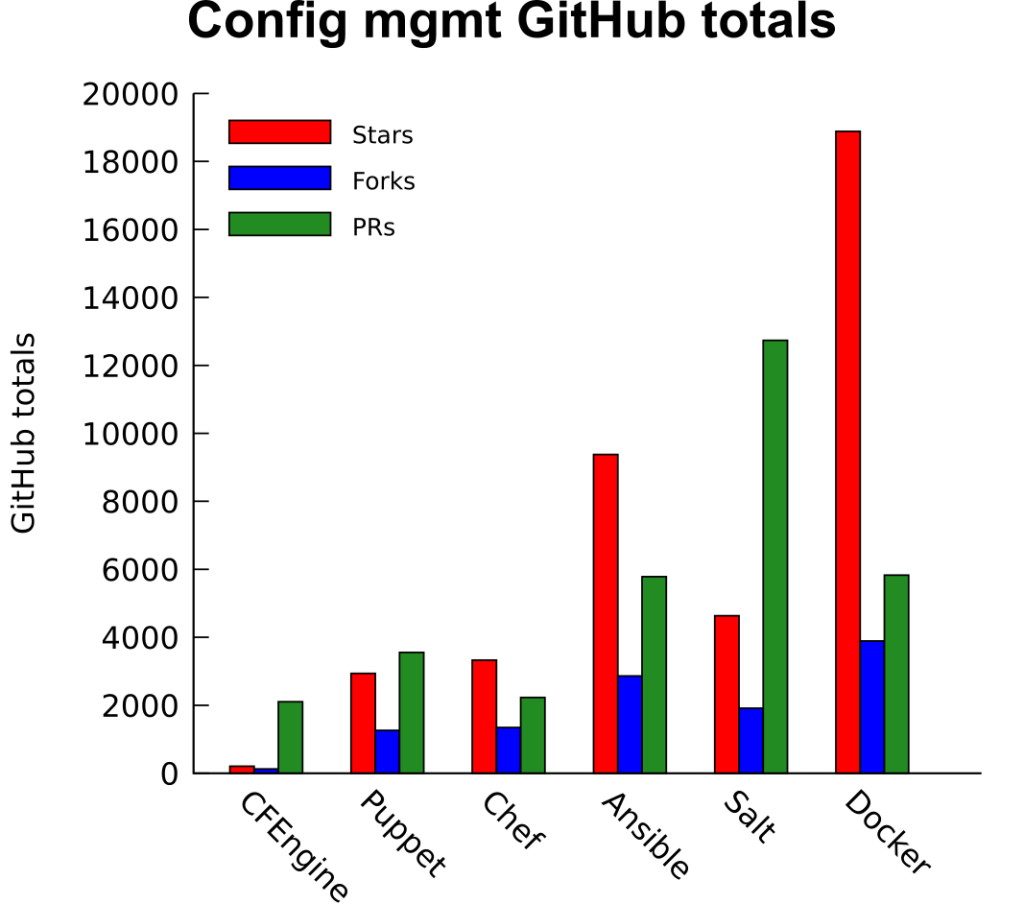 Disclosures: Chef and AnsibleWorks are clients. Puppet has been. Docker, CFEngine, and SaltStack are not.