Ten years ago today the DARPA funded paper describing REST was six months old. There was no Firefox. No Eclipse Foundation. No Facebook. No Amazon Web Services. No Twitter. No LinkedIn. No YouTube. No Etsy. No Gmail. No Hadoop. No iPhone. Apple, in fact, was worth $5.143B, or about what they made every month and a half in 2012.

Much of what we take for granted today didn’t exist then. Like the industry’s affection for developers.

When James and I officially incorporated RedMonk ten years ago yesterday, the technology industry cared little for what developers thought – all of the focus was on “enterprise” buyers. Which we never understood. It seemed self-evident to us that with access to technology steadily being democratized by open source and later cloud, SaaS and other wider industry trends, developers were increasingly in charge, not the erstwhile “IT decision makers.”

This is our understanding of the world. 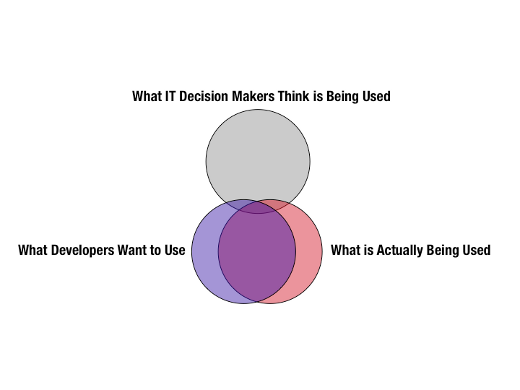 For the last ten years, then, we’ve been paying the most attention not to what CIOs want to buy, or what software vendors think they want to buy, but what developers are using.

From our perspective, if you want to understand where the industry is headed, your best answers will come from those who are actively determining that path. Our time with developers – or more precisely, practitioners of any one of a dozen or more different technical disciplines – has gifted us with a reasonable ability to predict where the industry is headed. Granted, not always with a high degree of temporal precision.

If there’s one thing we at RedMonk have learned over the past decade, it’s that the ability of the technology industry to change substantially outpaces the industry’s own ability to understand and adapt to that change. What we understand at RedMonk to be true today might take as many as five years or more to be widely understood. Hence our saying “we can tell you what will happen, we just can’t tell you when.”

Here are a few of the subjects we’ve covered since 2004, when we really began blogging in earnest.

And that is strictly my research, because it’s what I remember best. My colleagues have produced even better predictions and research over the last decade, and there are dozens more predictions we could point to that have subsequently been proven out: identifying Amazon as a credible enterprise threat, for example. Many more, such as our expectations with respect to software and data-based revenue models, are years away from becoming mainstream.

A lot has changed over the last decade. If you owned a thousand shares of Apple, for example, they’d be worth $576,750 more today than when we incorporated. RedMonk has changed as well. We’ve changed webhosts no fewer than six times. Domain registrars four. Email providers three. Content management systems three times. We’ve been through two recessions, maybe half a dozen offices between us, and the firm has moved its headquarters no fewer than three times.

We’ve also changed how we work. As more developer related data has become available, for example, we’ve aggressively embraced quantitative analysis. Whether it’s our research, or collaborating with third parties like Black Duck, Jaspersoft or New Relic on their own data, the “we-don’t-do-numbers” shop is all about the numbers today. We’ve added services around green and sustainability research in GreenMonk, and you’ve probably heard that we also now organize conferences in the Monktoberfest and the Monki Gras.

But what hasn’t changed about RedMonk is more important than what has. Ten years later, our culture is still family oriented – a good thing given the marriages, births and adoptions. Our focus, meanwhile, remains the same: we are still firmly convinced that developers are the most important constituency in technology, and that our ultimate purpose as a firm is to be their advocates within the wider technology community.

When we look back over the last decade, it’s as impossible to measure our effectiveness as developer champions as to count the MySQL instances in the world. If we’re lucky, the metric isn’t disk space: the bulk of our professional output is housed in a MySQL database that weighs in at a paltry 135.8MB.

We hope that developers have and continue to find our research useful. We hope that we’ve been able to help improve their lives, whether that’s helping them get new jobs, serving as their voice for vendors or even just buying them beers. Most of all we hope the industry eventually realizes what we at RedMonk know: that developers are the New Kingmakers.

In the meantime, I’d like to thank my colleague James for being a great partner for all of these years, Cote for all of his years of excellence, Tom for bringing RedMonk to new arenas, Donnie for picking right up where Cote left off, Marcia for being the most important person at RedMonk, my parents, Sheila and Steve, for helping to support me while we got RedMonk off the ground, and my wife Kate both for keeping us out of legal trouble and for being beyond patient with odd hours and worse travel schedules.

Thank you to all of the developers that have taken the time to read our research, educate us or simply tell us why and where we’re wrong. You are why we exist.

Thank you all for a decade of RedMonk and here’s hoping we’ll have another ten years together.

Postscript: in anticipation of the question, yes, we will be doing a tenth birthday celebration, but conflicting with the holidays seemed like a poor idea. Stay tuned.