This is the concluding half of the exercise in which I review my predictions for the calendar year just ended. If you’re looking for the original 2011 predictions, those are here. Part 1, meanwhile, can be found here. With that, on to the predictions.

Workstations Will Make a Comeback

This prediction is not supported by data nor even anecdotal evidence. Even in the small sample of my contacts, migrations away from tower-style hardware profiles towards laptops accelerated. Wider market developments seem to confirm this; Apple may be retiring their existing workstation platform, the Mac Pro.

ARM Will Emerge as a Server Player

Whether they will ultimately emerge as a credible mainstream alternative remains to be seen, but ARM is indeed emerging as a server player. Though virtually all of them discuss it privately, HP (via Calexda) this year became the first major systems player to publicly detail plans for ARM servers – perhaps banking on the fact that the upcoming A15 processor is more server friendly,

Intel is predictably skeptical of ARM’s viability in its core markets, with CEO Paul Otellini bluntly dismissive: “It ain’t gonna work.” And while it certainly hasn’t proven to work thus far, and there are real architectural and software issues to address, the power profile continues to pique the interest of server manufacturers and customers alike. Even marginal power savings mean real dollars at scale.

Tablets are a Real Market

“The iPad, introduced in April — is on track to deliver $15 billion to $20 billion in revenue in its first full year of sales, estimates A. M. Sacconaghi, an analyst at Sanford C. Bernstein. At that size, if the iPad were a stand-alone company, it would rank within the top third of the Fortune 500.”
Steve Lohr, “The Power of the Platform at Apple“

Any questions? It’s true that to date the tablet market is more accurately characterized as an iPad market, but irrespective of the particular vendor dynamics in the space, the hardware form factor appears here to stay.

In August, we did a quick pass at some developer metrics and confirmed what our qualitative research had already indicated: that interest in PhoneGap was booming. Here’s a chart of StackOverflow traction, for example. 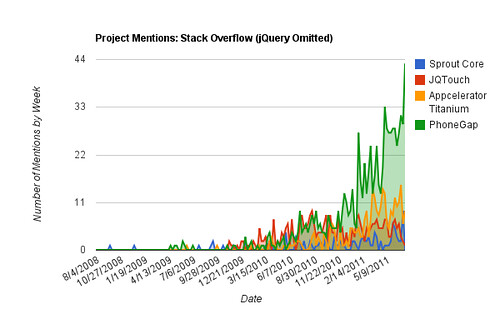 Interest was booming enough, in fact, that Adobe acquired the talent behind PhoneGap, the code of which was submitted to Apache. This interest was unsurprising in light of the frustrations experienced by enterprises and developers alike, who are collectively slowed by the process of building an application on one platform and then porting to a second. Developers are frustrated enough, in fact, that they are in certain cases actively stalling development. While opinions differ on individual platform trajectories, most would agree that the status quo is unlikely to remain static. Meaning that at least some native development effort is likely to be wasted.

Couple that with improving mobile browser capabilities, and interest in HTML5 and hybrid approaches is likely to remain strong, in spite of inherent advantages to native development like discovery.

The NoSQL Marketplace Will Experience Consolidation

The merger of CouchOne and Membase into CouchBase in February provided some evidence that the long anticipated wave of consolidation in this space was beginning, but the balance of the year provided little evidence to support this aside from the acceleration of a few individual players such as MongoDB [coverage]. I remain convinced that the marketplace will be unable to sustain the current volume of would be commercial entities, but from our conversations with both those in a position to potentially impact consolidation and those interested in partnering with various NoSQL players, it is clear that consolidation will depend on clearer winners and losers to proceed. This should occur in 2012.

I’ll count this as a push in light of the CouchBase merger which subtracted one player but otherwise saw very few exits.

The implicit rejection of the Structured Query Language in the NoSQL term is ironic in light of the fact that a variety of projects are now adding similar features. Continuing in the proud tradition of Hive and Pig, which provide query language interfaces to Hadoop, DataStax announced CQL in June while CouchBase and SQLite announced UnQL in July [coverage].

Whether we’ll see a unified interface or a variety of engine-specific implementations as Alex Popescu would prefer remains to be seen, but query languages will be coming to the majority of NoSQL stores one way or another.

From Twitter open sourcing the Storm assets it acquired via the BackType transaction to the New York Stock Exchange’s donation of OpenMAMA to the Linux Foundation, it is increasingly clear even to traditional parties that the release of non-strategic code as open source has multiple benefits. GitHub’s Tom Preston-Werner’s list of same is difficult to improve upon:

It may or may not be beneficial to open source core strategic assets, as VMware did with Cloud Foundry, but it is increasingly hard to justify protecting those that are purely tactical in nature. The benefits in many if not most cases will outweigh the costs, which is why we’re seeing an increase in contributions to open source projects. 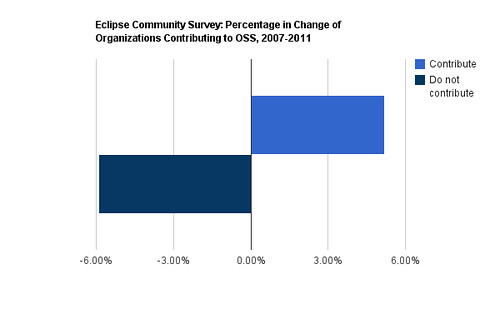 The data from the annual Eclipse surveys is one example of this. If we examine the percentage of organizations that contribute back to open source versus those that do not from 2007 to 2011, it is clear that comfort levels with open source generally are rising.

Forking: How Development Gets Done 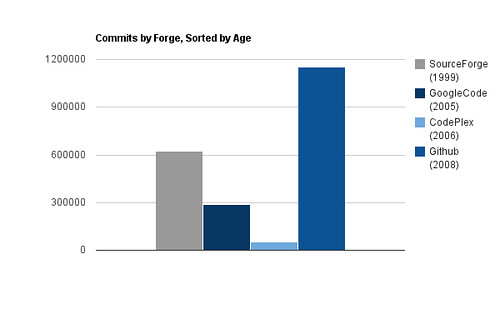 The benefits to distributed version control and the beneficial forking model it encourages have been sufficient to convince even large projects such as Eclipse: the majority (44.2%) of its projects have migrated from CVS or Subversion to Git. The popularity of this model is also on display in the graph above, which depicts the relative performance among commit volume of four major forges. GitHub is the youngest of the forges and yet commands a significant majority of the overall commits observed by Black Duck.

While it is difficult to separate the success of Git from GitHub, it is not necessary for this exercise, because both by design encourage forking as a developmental best practice. Forking is increasingly how development is conducted.

Ubuntu is the New SUSE

In March of last year, I explored a set of metrics evaluating the relative performance of SUSE with developers, from jobs data to community traction. None of the metrics favored SUSE at the time, and the observed trends that favored Ubuntu persist. Consider, for example, the job trends: 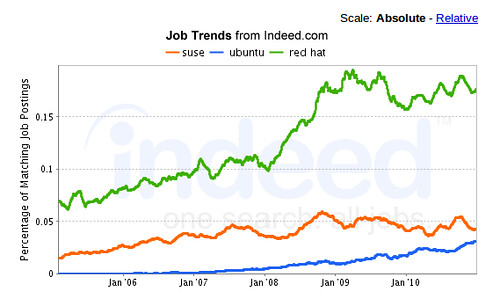 As pointed out at the time, despite the relative outperformance of SUSE relative to Ubuntu, the respective trajectories were problematic for the former. Revisiting the data today, we can see that the trendlines produced a logical outcome. 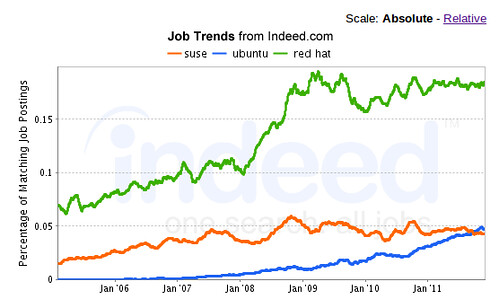 Commercially, Ubuntu has continued its emergence as a server player. While initial claims that it was the primary operating system behind HP’s public cloud may have been [overstated],(http://arstechnica.com/business/news/2011/10/ubuntu-will-power-hps-new-cloud-service.ars) in HP’s words “that they are the first one in our current private beta.” This is an announcement that would not have been possible prior to 2011.

I count this as a hit, though it will be interesting to see if Mint can become the new Ubuntu, in turn.

In April, we were fortunate to be able to analyze data from Black Duck regarding open source project commits by programming language. When we compared a 2011 snapshot to the volume of all time commits, the rise of JavaScript was apparent. 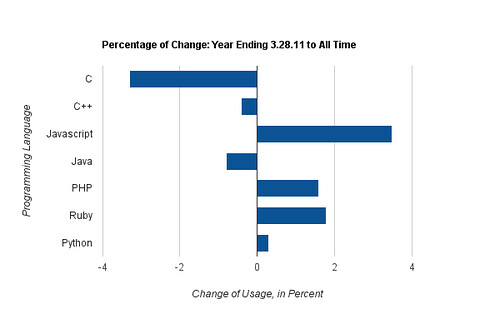 While dynamic languages were ascendant across the board, JavaScript outperformed even high growth languages like Python and Ruby.

As “The Rise and Rise of JavaScript” notes, the prospect of using the same language on browser and server is compelling, but it doesn’t stop there:

JavaScript’s serialization form, JSON, is becoming ubiquitous as a lighter-weight alternative to XML for streaming structured data, and NoSQL databases like mongo are happily using JSON and JavaScript in the database as a query language. This means, for the first time, you can have the same JavaScript function in the browser, on the server and in the database.

JavaScript may only be the most popular language within forward communities like GitHub, but its future in the wider world is bright, Dash notwithstanding.

One the one hand, I got this wrong, because Steve Jobs apparently first attempted to acquire Dropbox in 2009.

“Jobs presciently saw this sapling as a strategic asset for Apple. Houston cut Jobs’ pitch short: He was determined to build a big company, he said, and wasn’t selling, no matter the status of the bidder (Houston considered Jobs his hero) or the prospects of a nine-digit price (he and Ferdowsi drove to the meeting in a Zipcar Prius).

Jobs smiled warmly as he told them he was going after their market.”

It was in 2011, however, that Dropbox – a firm that had previously raised a mere $7.2M – justified that decision, with a $4B valuation.

So I’ll go ahead and call this one a push.

Scoring the 2011 predictions, then, we get 14 of 17 correct against two push and one miss. Generally, an 82% success rate in forecasting means that the game is rigged; 51% is enough to make a substantial profit in public markets. And in reviewing the predictions, it’s certainly true that a few – the continuing developer shortage, for instance – were likely obvious enough to not merit the “prediction” label.

But we do believe, as our website suggests, in William Gibson’s claim that the future is already here, it’s just unevenly distributed. Conclusions that are obvious to us are not to many traditional enterprise technology buyers, so in that sense this game is, in fact, rigged. We’ve predicted the rise of dynamic languages, Node.js, NoSQL, REST, Software-as-a-Service and such then not because we’re Nostradamus, but because we know who to listen to.

If you want to hear what that audience is telling us about 2012, then, stick around. Those are due next week.