Predicting is an easier business than it once was. True, technology is hysterically accelerating rates of change and disruption, but that’s only relevant if the substance of your predictions matters. Which all too often, these days, it doesn’t. Analysts and pundits are able to prognosticate with relative impunity; who has the time to go back and check their accuracy? Pageview driven models, in fact, reward wilder predictions because the error cost is, generally, approaching zero. Unless you predicted, say, that Linux would be killed off by Windows NT, nobody will remember later.

I find value in reviewing my annual predictions, however. If they prove correct, that’s useful. If they were not, understanding the reasons why is important to adjusting our models moving forward.

If you’d prefer to read last year’s first, they can be found here.

Firefox Will Cede First Place to Chrome, But Not Without a Fight 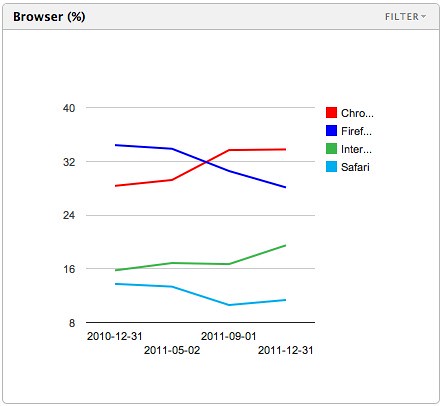 According to RedMonk Analytics, whose data reflects our developer-heavy audience, Firefox was able to hold off Chrome for two quarters. On the first of June, Firefox held a 32.58 share of our audience to Chrome’s 32.08. By the second, Firefox was in second place and would remain there for the balance of the year, widening the gap in the process. At present, our browser metrics peg Chrome at 36.38 with Firefox a distant second at 25.48.

I feel safe counting this one as a hit.

PaaS Adoption Will Begin to Show Traction, With Little Impact on IaaS Traction

The first Platform-as-a-Service providers essentially asked developers to trade choice for development speed. Like Ruby on Rails – itself the basis for multiple first generation PaaS platforms – PaaS was built for those that would embrace constraints. But PaaS platforms never saw the type of growth that Rails experienced, in part because of the further loss of control that the cloud represents. It’s one thing to have a web framework like Rails dictate the way that you build web applications; having PaaS platforms also choose the operating system, database, version control systems and more was too much.

Which is why second and third generation PaaS providers have furiously removed barriers to entry, adding additional runtimes, open sourcing the underlying platform and allowing you to pick your provider. Which, in turn, is why adoption of PaaS is accelerating. VMware CEO Paul Maritz calls PaaS “the 21st-century equivalent of Linux,” which explains not only why they feel compelled to compete in the space, but also why Red Hat might.

Virtually every vendor in this space is reporting growth similar to the Hacker News trajectories for Cloud Foundry and Openshift (below). 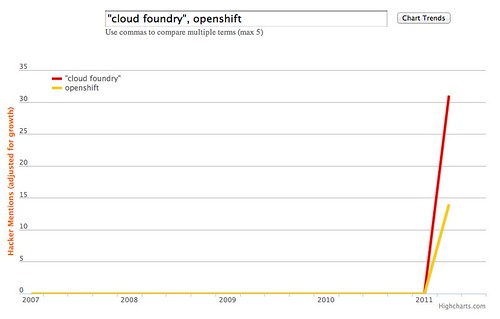 In spite of the growth of PaaS, however, none of the metrics we track reflect any decline in usage of general infrastructure platforms. Quite the contrary, in fact.

Firms Will Increasingly Seek to Leverage the Data They Generate

Turning data into revenue has been one of the core themes of the past year, as well as the focus of my talk at the Open Source Business Conference in May. We’ve long held SpiceWorks up as a model of monetizing data, and as customers adjust to the reality that they’re already sharing data and vendors cease to regard it as a third rail issue, we’re seeing more businesses embrace data based revenue streams, as with Sonatype Insight. From 10gen to Black Duck, vendors are increasingly positioning themselves to be purveyors of data as much as software. Data is no longer the byproduct, but a product itself.

Hadoop Will Become the MySQL of Big Data

EMC, HP, IBM, NetApp and even Oracle all have Hadoop – or in EMC’s case, MapReduce – plays in market. Microsoft actually deprecated its own Dryad initiative in favor of the Apache project. Players from AsterData to CouchBase to EnterpriseDB to MarkLogic to Tableau to Vertica have purpose built Hadoop connectors. The commerical distribution space, once essentially owned solely by Cloudera, has expanded to multiple third parties with varying points of differentiation. 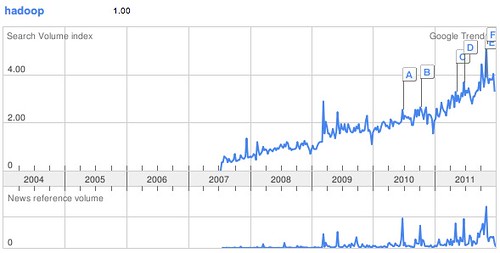 Need I say more about the growing ubiquity of Hadoop? I count this as a hit.

Granted, predicting a shortage of qualified development talent will be seen in some quarters as controversial as predicting that the sun will rise in the east. But part of this is context: certainly in January, the economic direction was less than certain. And in spite of an unemployment rate that has hovered just south of 10% for the better part of the last calendar year, hiring continues to be an issue for the majority of our clients. To the extent that several are spinning up offices solely for purposes of recruitment. This is not surprising, given the historical growth in employee headcounts (see above) that has, to date, been relatively resistant to the global economic crises.

Demand varies by skillset, as might be predicted, but 2011 remained – by our metrics – a tight market. Other market watchers support this assertion.

“Hiring talent in Silicon Valley is the toughest since the last bubble and investors are starting to openly wonder how this one will end.”
Steve Blank

“There is a war for talent, particularly developer talent, going on. Not just in Silicon Valley but also in NYC and many other places around the country.

Companies, small and large, are resorting to all sorts of creative ideas to recruit. Free lunches, free yoga, pushing code day one, cool schwag, options, RSUs, pretty much whatever it takes.”
Fred Wilson

While we don’t have good data then on market specific hiring (Bureau of Labor data is not fine grained enough), the evidence available to us seems to support the contention that shortages of tech talent remain.

Node.js Will Continue its Growth Trajectory

October was a rough month for Node.js, with posts like Node.js is Cancer and node.js Is VB6 – Does node.js Suck? following the tradition of March reddit discussions like Is NodeJS Wrong? The Trough of Disillusionment, it seemed, had arrived well ahead of schedule.

Except that interest metrics showed no commensurate decline. Node took – again – three of the Top 5 spots in inbound search queries within RedMonk Analytics. Which is unsurprising against the backdrop of Google’s Insights for Search numbers.

Over on GitHub, meanwhile, which itself has achieved dramatic growth, Node.js is the second most popular watched repository, ahead of Rails, jQuery, HTML5-Boilerplate, and Homebrew. Microsoft clearly perceives this growth, because it has worked with Joyent to create a stable build of Node for Windows which in turn led to an SDK for Azure.

All of which means nothing except that Node’s growth trajectory continues.